The Best Things to Do During Pride Month in Miami 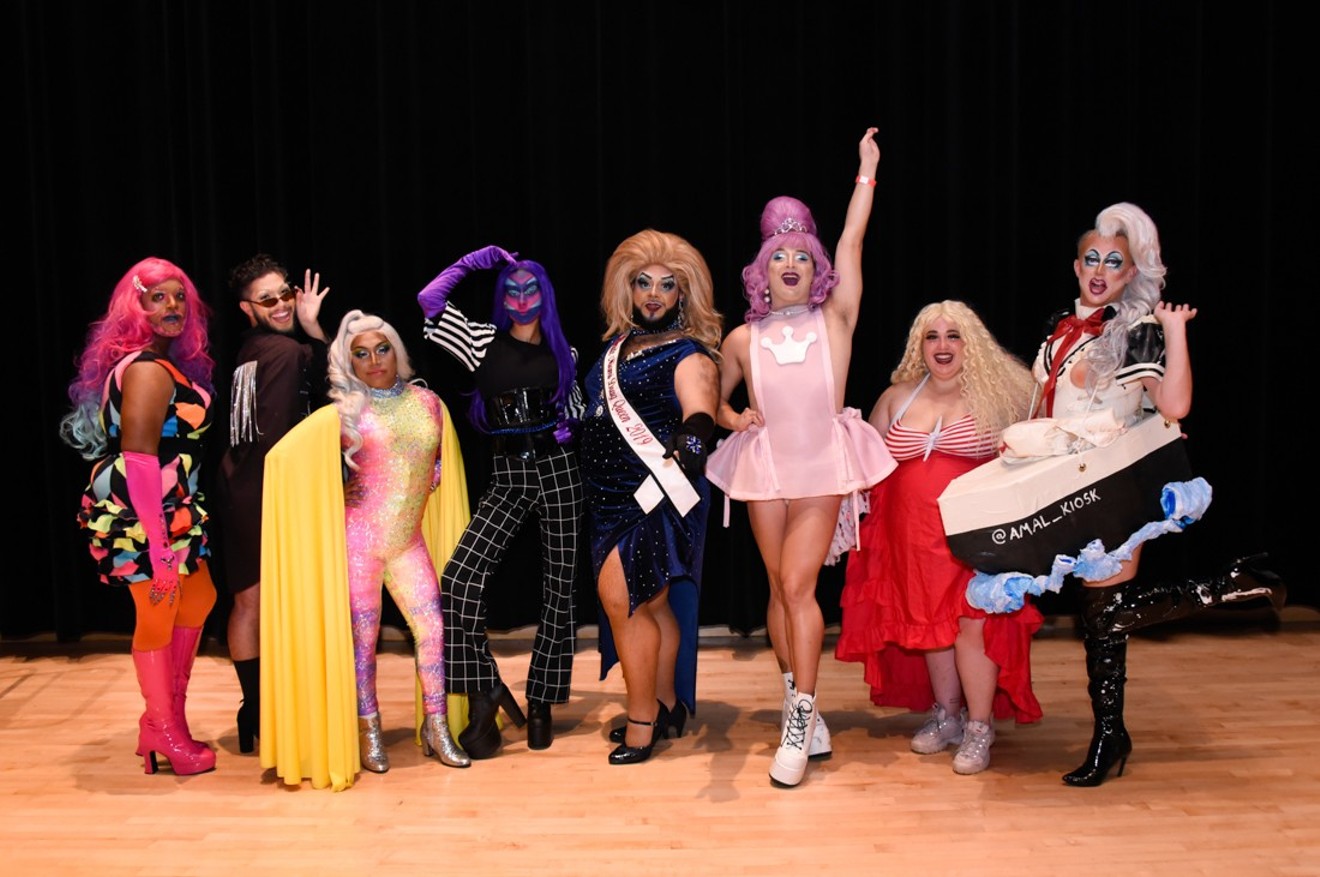 Party like a queen during Miami's Pride events this month. Michele Eve Sandberg
It’s been 50 years since the Stonewall Riots in New York, ushering in a wave of protests, activists, and social changes long overdue for LGBTQIA+ folks in the United States. A lot has changed since the 1970s, but things are still far from equal. This June, Miami has its fair share of offerings for Pride Month, giving members of the community and allies a chance to reflect, celebrate, and come together. Last weekend, the festivities kicked off at the Arsht Center, hosting a free Communitea Dance celebration including a performance by RuPaul's Drag Race star Shangela — and that was just the beginning. But while our city can be all sorts of glamorous, flashy, and in your face, there are also options for the more introverted.

Here are just a few of the many ways to celebrate Pride this month.

Versus: All or Nothing. Internet Friends expertly serves queer nightlife in South Florida, and its Pride party promises to be no exception. As the name implies, this event will include battles between DJs and performers such as Gami, Gia, Keanu Orange, Sally Hunter, and other. 11 p.m. Friday, June 7, at the Ground, 34 NE 11th St., Miami, 305-375-0001; thegroundmiami.com. Tickets cost $10 via eventbrite.com.

Raw Berlin. Wanna get carnal? Head to Score Nightclub’s Pride edition of its monthly party, this time set in the heart of Wynwood. Whether you’re looking to cruise, peep, or simply enjoy the people-watching and go-go dancing from a safe distance, you can bet that at an event called Raw Berlin, there will be plenty of leather, sultry looks, and heat. J Warren, Alex Ramos, and Jalil Z will provide the soundtrack. 11 p.m. Saturday, June 8, at Wynwood 5th Ave, 2451 NW Fifth Ave., Miami; wynwood5thave.com. Early-bird admission costs $15 and advance tickets $20 via seetickets.us.

Gender Blender at Las Rosas.
Karli Evans
Las Rosas' Second Anniversary. If the thought of sweaty bodies and long lines doesn’t quite do it for you, head to Allapattah and help Las Rosas celebrate its second anniversary. The Black Market and Gender Blender will host a very queer takeover offering live bands, delicious drag performances, and wares for sale such as zines, jewelry, art and more. Highlights include drag performers Karla Croqueta and Lady Paraiso, as well as music by Donzii and Ghostflower and the spinning talents of DJ Culture Prophet. 7 p.m. Sunday, June 9, at Las Rosas, 2898 NW Seventh Ave., Miami; lasrosasbar.com. Admission is free.

Double Stubble. One of Miami's best queer parties returns for a special Wynwood Pride edition, offering anyone who RSVPs on Facebook the chance to win VIP tickets to the inaugural Pride celebrations in Wynwood later this month. Even if you don't take home free stuff, you'll get to see epic drag performers such as King Femme, Sasha Damore, and Viola Putex in action. 9 p.m. Thursday, June 13, at Gramps, 176 NW 24th St., Miami; 305-699-2669; gramps.com. Admission is free; RSVP via facebook.com.

LGBTQ Pride Silent Disco. Lesbians in Miami have a difficult time finding their own space in the nightlife scene. But this Pride Month, they'll have to look only as far as Calle Ocho. Insideout, formerly known as Sidebar, will be the home to a lesbian silent disco hosted by Lezchic, founded by Rae Jenae, who creates and hosts events throughout the city. Tickets include headphones and four DJs to tune in and jam to, from reggae and dembow to hip-hop and house. There will also be vendors, games, and a bounce house. Why? Why not! There is no dress code, so just come as your best self. 9:30 p.m. Saturday, June 15, at Insideout, 337 SW Eighth St., Miami; facebook.com/itsinsideoutmiami. Admission costs $25 via eventbrite.com and $30 at the door.

Wynwood Pride brings the LGBTQ+ party to the mainland.
Monica McGivern
Wynwood Pride. Does one mere day of celebrating sound meager? Want several days of nonstop fun? Maybe three days will do the trick during the inaugural Wynwood Pride. There's something for every queen and queer at this music festival and block party, and a percentage of the proceeds will benefit three nonprofit partners focusing on youth (Pridelines), health (Survivors Pathway), and justice (Astrea Foundation). Wander and enjoy concerts, drag shows, and local and international talent such as Ivy Queen, Sensitive Black Hottie, Yoli Mayor, DJ Hottpants, and Octavia Yearwood. There'll also be art vendors, lip-syncing battles, an immersive food hall, and other diversions. All ages are welcome, so you don’t have to leave your younger sister or abuelo at home. 4 p.m. Friday, June 21, to 10 p.m. Sunday, June 23, at Wynwood Marketplace, 2250 NW Second Ave., Miami; wynwood-marketplace.com. Admission ranges from free to $75 for VIP perks via eventbrite.com.

Catwalk: Royal Rumble. Whether you've been voguing since the '90s or recently discovered Pose in reruns, pretty much anybody can appreciate a quality ballroom event. Look for performers to strut their stuff in categories such as vogue performance, runway, and realness. 11 p.m. Saturday, June 22, at Wynwood Marketplace, 2250 NW Second Ave., Miami; 305-239-8833; wynwood-marketplace.com. Admission is free via facebook.com.

Daybreaker Pride. Miami is a fun and sometimes wild city, but it’s also fit as hell. For those whose idea of a party is less drinking and more sweating during an intense workout, Daybreaker has you covered. Start the Pride celebration before lunchtime (while most of your friends are still asleep) with either yoga, fitness, or mat Pilates, followed by a dance party. There will be live performances, free kombucha, breakfast yummies by Manitoba Harvest, and other healthy surprises. Celebrate, get those toxins out, and feel good with your bad self. 10 a.m. Saturday, June 22, at Space, 34 NE 11th St., Miami; clubspace.com. Admission costs $15 to 25 via eventbrite.com.

Daddy Issues Miami. Wynwood Pride comes to a close with a party hosted by local favorites such as FKA Twink and Miss Toto. Jam to tunes courtesy of Mystic Bill and Mateo Segade. Organizers say this event is "all about fagging out." What better way to close out the month? 10 p.m. Sunday, June 23, at Wynwood Marketplace, 2250 NW Second Ave., Miami; 305-239-8833; wynwood-marketplace.com. Admission is free.
KEEP MIAMI NEW TIMES FREE... Since we started Miami New Times, it has been defined as the free, independent voice of Miami, and we'd like to keep it that way. With local media under siege, it's more important than ever for us to rally support behind funding our local journalism. You can help by participating in our "I Support" program, allowing us to keep offering readers access to our incisive coverage of local news, food and culture with no paywalls.
Make a one-time donation today for as little as $1.
Dana De Greff