Opening February 12, this incandescent-and-interactive project is transforming downtown Coral Gables into a free outdoor museum — with newly commissioned and existing works by local, national, and international artists curated to engage with some of the city’s most preeminent landmarks.

“Unlike all other blockbuster museum shows right now that had to be postponed because they could not be presented because of indoor restrictions, ICG is meant to be a free, outdoor, high-quality contemporary art exhibit,” says its chief curator, Lance Fung.

Pedestrians through the downtown area will spot the work of Cuban-born, Miami-based artist Carlos Estévez, who is developing video content on people’s movements, interactions, and sense of community. His first technology-based artwork, the video-mapped projection will be cast over the entire surface of the historic Coral Gables City Hall building.

Another technologically and artistically intricate work: Kiki Smith’s Blue Night, commissioned by the city specifically for Illuminate Coral Gables. The 40-by-190-foot installation will create a wonderland of constellations in Giralda Plaza.

Other works that use video mapping and projections will be found in Gables International Plaza (AKA the Davidson Building) on Le Jeune Road; Actors’ Playhouse on Miracle Mile; and Coral Gables Museum’s façade on Aragon Avenue.

“He started talking about this a few years ago. He had seen other public art and light-based exhibitions on his travels and thought this would be great for the Gables,” says O’Connell.

The mayor and Venny Torre, president of the city’s Business Improvement District and now president and cofounder of Illuminate Coral Gables, got together and started thinking about ways to make it come to life, O’Connell says.

The initiative is a city project, in collaboration with the Business Improvement District as well as the Coral Gables Chamber of Commerce, Coral Gables Community Foundation, and Coral Gables Museum, and in partnership with the Greater Miami Convention and Visitors Bureau. It has received funding grants from the Knight Foundation and the Kirk Foundation, other multiple family foundations, private companies, and in-kind sponsorships, according to O’Connell. 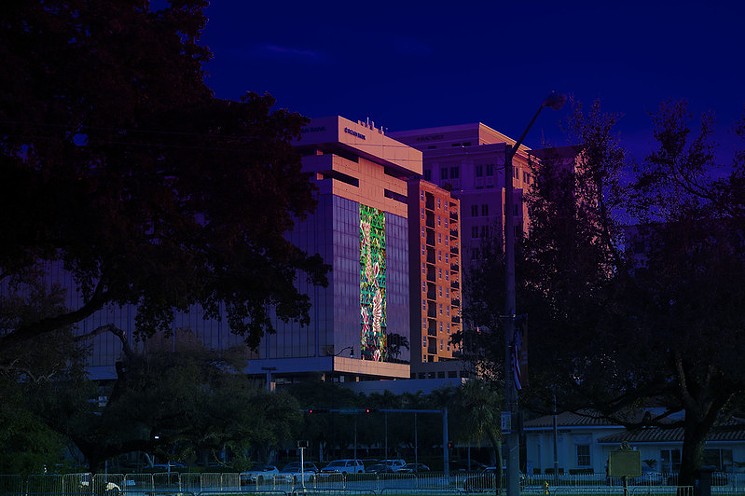 David Gumbs’ Echos of Souls, 2021 will be shown on what is known as the Davidson Building on LeJeune Road.
Photo courtesy of David Gumbs/lluminate Coral Gables
The overall costs for resources in this first year are a little under $1 million, O’Connell says. But the first Illuminate Coral Gables exhibition is worth well over several million dollars based on the artistic works alone, Fung adds. Six of the works were commissioned specifically for the show, while two others — Cai Guo-Qiang’s Fireflies and Sandra Ramos’ 90 Miles — have been shown in various forms in two other exhibitions.

"Illuminate Coral Gables is really about focusing and enhancing the Coral Gables profile in the fine arts community and bringing more artists to the Gables,” O’Connell says.

To bring a show of such a scope together, the board of Illuminate Coral Gables conducted a search for a chief curator. With more than 40 responses from local, national, and international curators, it selected Fung, of California-based Fung Collaboratives. Then Fung added a curatorial team, which includes Catherine Cathers, Coral Gables’ arts and culture specialist;  Jennifer Easton, art program manager collection for California’s Bay Area Rapid Transit; and Rosie Gordon-Wallace, founder of the Diaspora Vibe Cultural Arts Incubator.

Fung’s specialty is curating large-scale, public art exhibitions. Before he even began working with the board of Illuminate Coral Gables, he wanted to make sure he was the right fit for the project. He wasn’t just presenting art plunked down in various places. He and the board agreed that this was going to be a public art exhibition of international scale.

“I work on large scale shows where the work is easily accessible and visually captivating, socially aware and conceptually driven,” he says. “I work with artists whose work can stand equally inside a museum in Miami, for instance, or in front of a museum, or in a public space, and it is still the same artwork.”

Truth be told, the original iteration of Illuminate Coral Gables was to have included 20 installations.

“Many of them were static sculptures and art that would require people to gather around,” O’Connell says.

The question for all those involved was: How would that work during a pandemic?

So, that number has been culled to eight for the first year, Fung says. He believes the eight works by 16 artists will not only speak to visitors, but also engage them in conversation, and  —  of course — impress, all at the same time.

“My first criteria for all of the pieces was to have the works be super-compelling in the daytime and, at night, have them come alive in a different way,” he says. “Daytime, they may be more intellectual or more obvious, but the subtlety comes alive at night. That’s when it’s a little more magical, sometimes even spiritual.”

Martinique-based artist David Gumbs’ work will appear in Gables International Plaza and at the Miracle Theatre. Movements will trigger random, computer-generated animations and patterns. The work is a “token to lost souls due to the COVID pandemic and to social injustices,” Gumbs says. 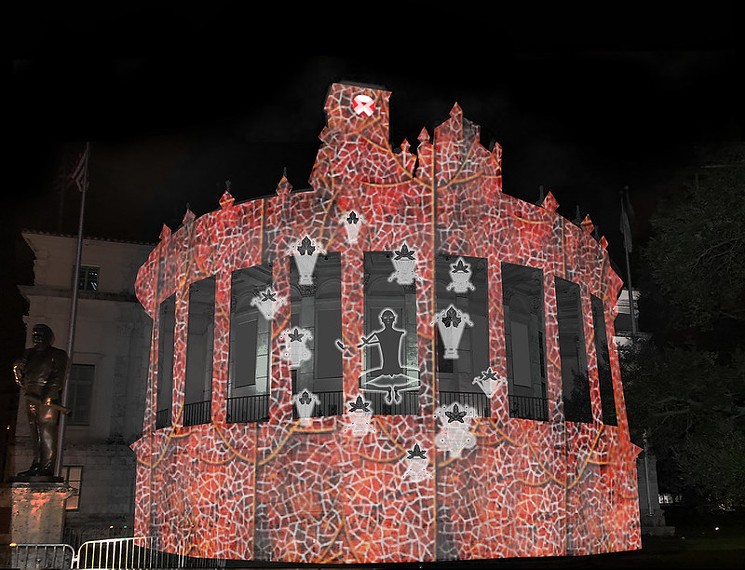 Ruben Millares and Antonia Wright created site-specific sculptural light installations. Through their barricade installations placed in different locations, the artists will transform a utilitarian object into a work of art that viewers can interpret in ways personal to their own experience.

Visitors will find Ramos’ 90 Miles: De-construction, 2021 at the Hotel Colonnade on Aragon Avenue. The divided 32-foot walkway is composed of 12 lightboxes representing the journey between Havana and Miami.

Guo-Qiang’s Fireflies was first commissioned by the Association for Public Art and presented in Philadelphia in 2017. A series of American-made pedicabs are transformed into interactive sculptures through handmade silk Chinese lanterns. Previously an interactive work where visitors could enter the pedicabs, this time around, Fireflies has selected volunteers riding throughout the exhibit.

“We could not figure out a way to have people ride these safely during COVID-19,” Fung says. “Maybe next year.”

The lanterns, made in the artist’s hometown village in China, are collaged onto the bicycles. “At night, when they flit around downtown, it will look like a mirage,” Fung says.

While it has been a year and a half of fits and starts because of the pandemic, Fung assures that this exhibit is the start of something. Organizers are nothing short of proud of their new benchmark and what they hope will grow to become an annual, internationally recognized, public art exhibition.

“You know, seeing even one or two of these site-specific works would be phenomenal, but the fact that there are eight scattered throughout, it’s nothing short of amazing,” Fung says.

Illuminate Coral Gables. Friday, February 12, through Sunday, March 14, throughout downtown Coral Gables; illuminatecoralgables.org. Admission is free.
KEEP MIAMI NEW TIMES FREE... Since we started Miami New Times, it has been defined as the free, independent voice of Miami, and we'd like to keep it that way. With local media under siege, it's more important than ever for us to rally support behind funding our local journalism. You can help by participating in our "I Support" program, allowing us to keep offering readers access to our incisive coverage of local news, food and culture with no paywalls.
Make a one-time donation today for as little as $1.
ArtburstMiami.com is a nonprofit source of theater, dance, visual arts, music, and performing arts news.