Monique Lassooij's Best Seat on the Water and work by Adam Thompson Photos by Mark DeAngelo
Artist Monique Lassooij once tried to sneak into Miami Marine Stadium. The historic concert venue where legends such as Ray Charles, Queen, Jimmy Buffett, and the Rolling Stones once performed has been shuttered since Hurricane Andrew struck it in 1992, but that didn’t stop graffiti artists from making their mark on the space.

Lassooij moved to Miami from the Netherlands in 2006, well after the stadium became an underground artist haven. A few years later, she wanted to join the scene. “I knew a lot of the artists that went in there to spray-paint,” she says. “Me and a friend wanted to get into the stadium one night to do our own little tags. I wanted to make a face on one of the chairs.”

A fence blocked one side of the stadium. When they reached it, her friend jumped over first. Lassooij climbed up and was leaning halfway over the top when she heard someone clearing his throat behind her. “I look through the fence, through my legs, and I see a uniform. And he says to me: ‘If you come down on my side, I will say nothing. If you go to the other side, I have to call the cops,’” she says, laughing. “So I just went down. The next day we found out that on the other side, there was no fence.”

Years later, Lassooij got her chance to paint one of those chairs after all, and it’s on display at the Miami Design Preservation League (MDPL). The project began in 2016, when Heineken USA removed several hundred seats from the stadium for its crowdfunding campaign Save Your Seat — an effort to support the restoration of the historic venue. Once the campaign was complete, the leftover chairs were given to local artists who were asked to repurpose them into new works of art. The resulting exhibit, “If Seats Could Talk,” was co-curated by the MDPL and Angela Shlyakhov of Anzhelika Productions, and was recently extended until September 9.

For the artists, the rules were simple: They could do anything they wanted with the chairs (take them apart, use various pieces, paint them, incorporate them into a larger artwork, etc.) as long as the result reflected Miami Marine Stadium in some way. Each participant wrote a 200-word artist statement to accompany the finished piece.

As the 12 chairs on display at the MDPL demonstrate, no two approaches were the same. There are seats whose wooden slats hang on the wall like paintings and seats that became elaborate sculptures. Many of the artists are also musicians, cartoonists, doctors, or architects. For their piece, Alfredo Capelli and George Hernandez gathered plastic from the sea and placed it in a fishing trap beneath the chair to make a statement about ocean pollution. Enma Saiz broke hers into small pieces to create an elaborate scene of what a day at Miami Marine Stadium might have looked like midcentury. Donna Lee Steffens painted an American flag on the back of her chair and affixed nails to the seat. Rush Bowles incorporated found coral into his creation. 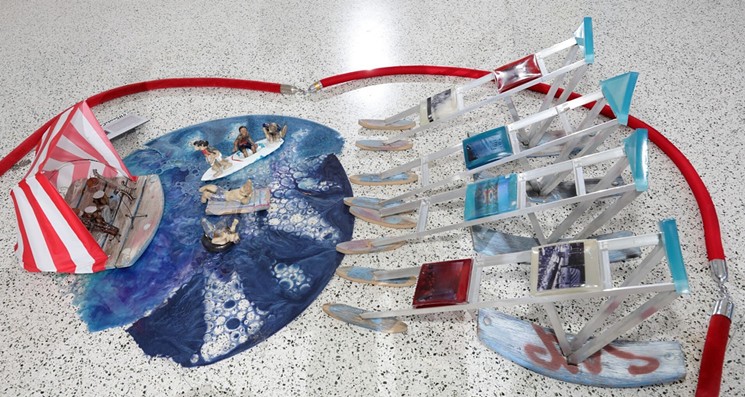 Enma Saiz's contribution to "If Seats Could Talk."
Photo by Mark DeAngelo
For her part, Lassooij was inspired by the concertgoers at Miami Marine Stadium back in the day. Built in 1963 on Virginia Key, the structure was designed in part for boat race viewing and also included a floating stage for concerts. “I was looking at all the old pictures, especially from the '60s when people were going to the stadium for the first time, and they were all dressed up,” she says. “You could feel the buzz of people looking at each other and trying to look their best, so that was really my inspiration because I had never seen the stadium at work.” Her chair, titled Best Seat on the Water, shows three women, in smart outfits and heels, peering at their surroundings through binoculars. Lassooij painted the women in shades of grey, which she prefers over stark black-and-white. She hopes viewers will fill in the colors with their own imaginations, plus she also didn’t want to assign skin tones to the women.

The challenge of bringing her vision to life was considerable and took much longer than she expected. When Lassooij received her chair, it was covered in graffiti. She sanded down the front and then disassembled the chair. She painted on the wooden boards and hung them like a canvas. Because of technical challenges such as this, not every artist chose to accept the project. “I have a couple of friends who also got a chair, and two of them, in the end, said no,” Lassooij notes.

R.J. Heisenbottle Architects is working on a plan to restore Miami Marine Stadium by 2022. If the firm's proposal is approved, the reopened structure would once again host concerts and boat races, but it would also host more daytime activities.

It would be a triumphant return. After Hurricane Andrew, the stadium was deemed too damaged to remain open and was set to be demolished. But a subsequent engineering report showed no significant damage, and the structure has since been designated historic by the City of Miami and recognized by the National Trust for Historic Preservation. Up to 200 layers of paint cover some walls where graffiti artists have continually painted over previous work over the years.

According to Shlyakhov, the artists included in the exhibition were given their seats about two years ago, and there are still more than 50 that have not yet been exhibited. Nearly all of the artists are South Florida-based, except for three from New York whose work will be shipped down for the next show. The team is looking for new spaces to exhibit the chairs in Miami, and every piece is for sale.

“I’m happy to work with all these artists who we’ve combined as an international conglomerate, just like Miami is,” Shlyakhov says. “We hope to bring our artist world closer together, and once the Miami Marine Stadium is open, we would like to show more art there.” Raising public awareness about the stadium, its history, and the efforts to reconstruct it are also worthy goals. After all, there’s no structure quite like it. “This is South Florida’s Sydney Opera House.”

“If Seats Could Talk.” 10 a.m. to 5 p.m. Tuesday through Sunday till Monday, September 9, at the Miami Design Preservation League, 1001 Ocean Dr., Miami Beach; 305-672-2014; mdpl.org; restoremarinestadium.org.
KEEP MIAMI NEW TIMES FREE... Since we started Miami New Times, it has been defined as the free, independent voice of Miami, and we'd like to keep it that way. With local media under siege, it's more important than ever for us to rally support behind funding our local journalism. You can help by participating in our "I Support" program, allowing us to keep offering readers access to our incisive coverage of local news, food and culture with no paywalls.
Make a one-time donation today for as little as $1.