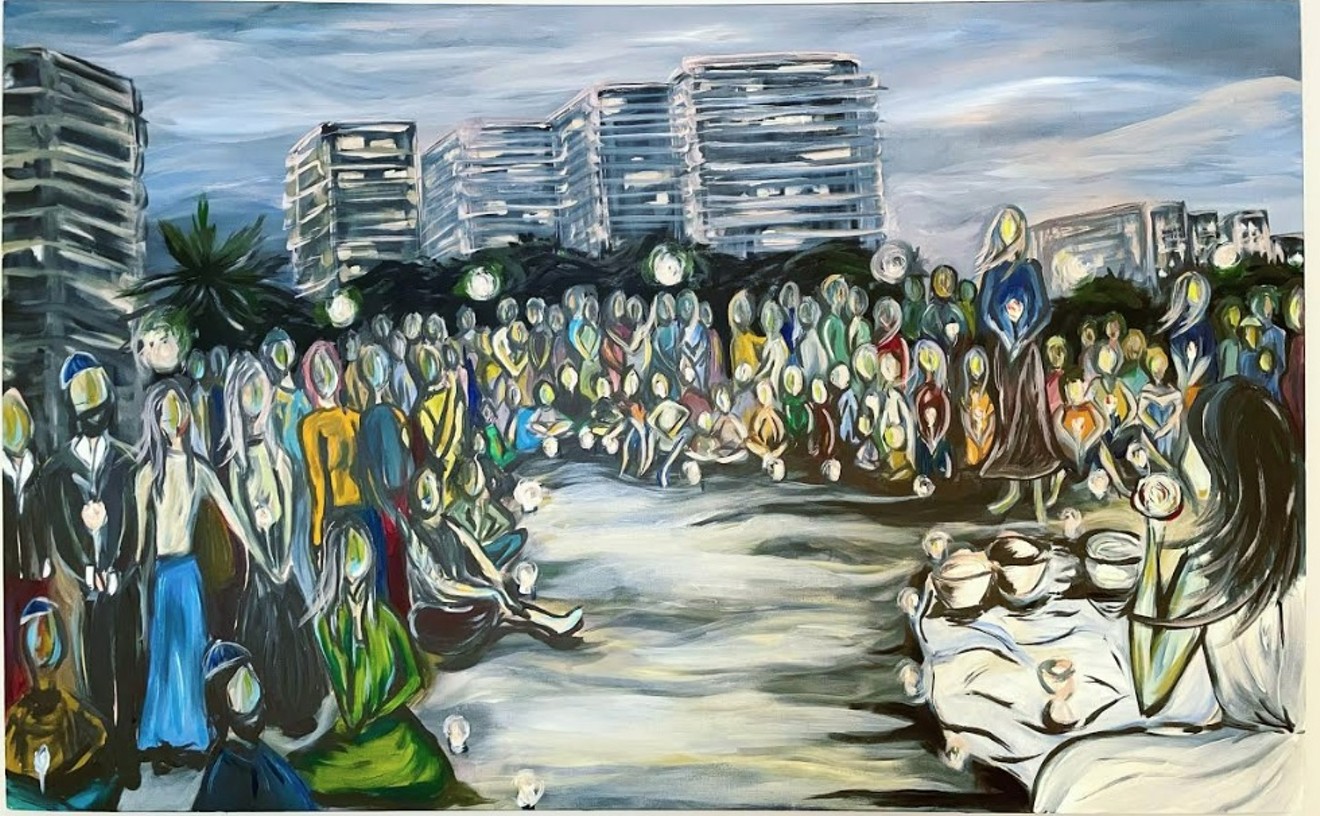 Side-by-side figures in McLean Fletcher’s painting depict a prayer vigil soon after the Champlain Towers South collapse. Photo courtesy of Swampspace Gallery
In times of grief and loss, art speaks the compelling language of solace. Consider the many millions who’ve visited possibly the most profound work of public art in the past century, the Vietnam Veterans Memorial in Washington, D.C.

We’re living among moments of crisis, from mass shootings to war in Ukraine. Reasons to grieve bombard us daily. Art can offer a respite, an opportunity to console the soul.

It’s no surprise that in recent years more public art memorials are being created and planned to honor lives lost to gun violence. In 2020 at the Bakehouse Art Complex, Chire “VantaBlack” Regans began her large-scale mural “Say Their Names: A Public Art Project,” commemorating lives taken by many forms of violence and abuse.

On Monday, June 20, the $2.3 million “Curtain of Courage Memorial,” in undulating bronze and steel, opened to the public in San Bernardino, California. It honors families and a community scarred by mass shootings there in 2015. Other memorials are planned in Orlando, Las Vegas, and Charleston, South Carolina.

The first anniversary of another catastrophic tragedy, the collapse of Champlain Towers South condo in Surfside on June 24, 2021, recalled a daily unspooling of horrific news as we learned how 98 people were killed. It’s considered one of the deadliest construction failures this country has witnessed.

Surfside resident Oliver Sanchez took the first anniversary of the tragedy to heart. He mounted an affecting one-month exhibit, “CHAMPLAIN in memoriam,” at Swampspace, his Design District gallery and studio space. Ruth Burotte portrays a wide-eyed young woman in a hard hat and boots in “CHAMPLAIN in memoriam.”
Photo courtesy of Swampspace Gallery
It pays homage to first responders and a community’s need for comfort following a stunning disaster. Calling on the talents of his close network of artists, some of whom he has previously exhibited, Sanchez curated a selection of painting, poetry, photography, and installation art by 12 visual artists.

On the opening night of the exhibition, on Friday, June 24, plaintive, soothing strains from a flute and harmonica played by Surfside resident Marcos Winer filled Swampspace, reprising what he did after the collapse. Winer would go to the site almost daily, recalls Sanchez, playing on the beach “for the lost souls hovering there. He did this for the dead, not for the living.”

Wanting to recognize the first anniversary but unsure at first if the exhibit was a good idea, Sanchez remembers some discouraged him by saying, “We’re moving on.” A veteran figure in Miami’s art community, he decided to mount it anyway.

“I hope it helps people process their grief on whatever level they are experiencing it. Grieving is a part of life,” he says. “Art is healing because it brings our feelings to the surface.”

Sanchez points out a large painting by New World School of the Arts grad and faculty member Reinier Gamboa, who’s created murals in Wynwood and Little Haiti. “It’s really the anchor for the show. It’s so prophetic.”

Gamboa’s 2021 Ruins of Miami shows an angelic statue reaching out in a gesture of benediction amid piles of concrete rubble. In the background, glimmers of silver light may evoke slim but determined hope as they pierce darkening clouds over the ocean. Flying ibis, as graceful as ballerinas, elude a snarling dog. Dwarfing the statue in the foreground is a massive piece of earth-moving equipment.

A smaller, less imposing painting from 2020 by Kiki Valdes also employs Christian imagery. It shows a crowd gathered around a crucified Christ, their distraught expressions somewhat in the style of Otto Dix, whose art was shaped by the trauma of World War I. “I painted this during COVID in Wyoming. I was painting all about spirituality,” Valdes says.

Eddie Arroyo's Champlain Towers Surfside, 2021 was inspired by a photograph by Oliver Sanchez in “CHAMPLAIN in memoriam” at Swampspace.
Photo courtesy of Swampspace Gallery
Other artists acknowledge first responders. In her gouache illustration on a digital print background, Ruth Burotte portrays a wide-eyed young woman in hard hat and boots. Eddie Arroyo, painting from a photograph taken by Sanchez, renders green-uniformed responders viewed from behind as they walk toward their shift at the site. Their no-nonsense professionalism is clear; their facial expressions must be imagined.

Some artists convey the tenor of those days in the immediate aftermath. Photographs by Tina Paul and Arhlene Ayalin record a community coming together to support each other. People contemplate a make-shift memorial on Harding Avenue. They gathered in prayer when it was announced operations would shift from rescue to recovery.

“I was trying to get a sense of the beauty and sadness, not really to concentrate on the horror,” Paul says.

As a self-appointed historian of the disaster, Sanchez contributes an approximately 15-minute slide show, with 100 photographs presenting the early history of Surfside, pivotal moments of June 24, 2021, and continuing to the present.

Art by Sharif Salem honors the memory of his father, Nabil Salem, a longtime Miami resident and advocate for Lebanese immigrants, Sharif explains. Nabil died of cancer on July 4, 2021. Together the two watched television news about Champlain while Nabil was hospitalized. For the son, losing his father and the Champlain collapse are intertwined memories.

“At that time of the search for people, we were going through my dad’s last days. He was very concerned about the other people,” Sharif says, recalling how his dad, despite deteriorating health, fretted that the search was too slow.

Sharif has enlarged scans of his father’s official ID document in Beirut, showing a black and white photograph of his father at age 16, with notations in French and Arabic. In this context, his art may only seem tangential. It is richly telling for multi-cultural Miami.

“CHAMPLAIN in memoriam." On view through Friday, July 22, at Swampspace, 3940 N. Miami Ave., Miami; 305-710-8631; swampspace.com. Admission is free.
KEEP MIAMI NEW TIMES FREE... Since we started Miami New Times, it has been defined as the free, independent voice of Miami, and we'd like to keep it that way. With local media under siege, it's more important than ever for us to rally support behind funding our local journalism. You can help by participating in our "I Support" program, allowing us to keep offering readers access to our incisive coverage of local news, food and culture with no paywalls.
Make a one-time donation today for as little as $1.
ArtburstMiami.com is a nonprofit source of theater, dance, visual arts, music, and performing arts news.