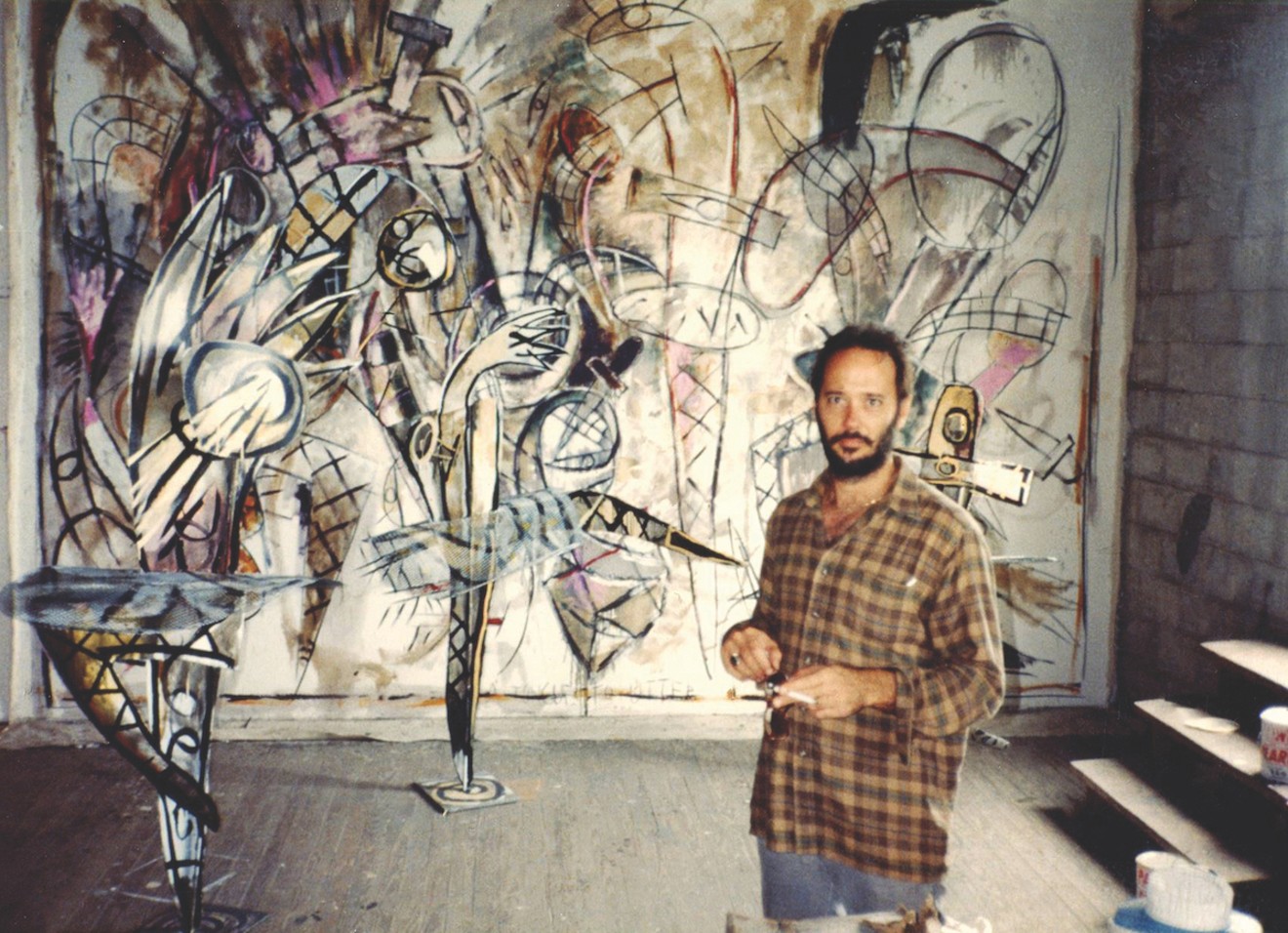 Carlos Alfonzo's existence and identity as a gay Cuban man and an artist are highlighted in "Carlos Alfonzo: Late Paintings." Photo by Ramiro Fernandez
Any avid Metrorail rider who has passed through the Santa Clara station in Allapattah or walked under the pedestrian bridge of Florida International University’s College of Engineering & Computing has borne witness to the late Carlos Alfonzo’s dazzling ceramic tilework. Scattered throughout these site-specific murals that still stand more than 30 years after their creation is the story of Alfonzo’s artistic trajectory. With an emerging career in Havana through the 1970s and into exile via the Mariel boatlift, he was processed through Arkansas and finally settled in Miami in July of 1980.

Alfonzo’s identity as a gay Cuban man and an artist is highlighted through "Carlos Alfonzo: Late Paintings," which opened on April 21 at the Institute of Contemporary Art, Miami. Covering two of the museum's ground-floor galleries, the exhibition undertakes a detailed examination of the final year of Alfonzo’s life before his death in February 1991 from AIDS-related complications. Ten paintings showcase the realities of the artist’s gruesome battle with the disease, which would take his life only a month before his work was showcased in the prestigious Whitney Biennial in New York City.

In 1990, the Bass Museum of Art in Miami Beach showcased "Carlos Alfonzo: New Work," which carried a similar tone of dark paintings. In a brochure for the exhibition, the late art critic Giulio V. Blanc noted how the language in Alfonzo's work during this period references Jackson Pollock's own "black paintings.” This reference also alludes to the bleak era of work by Spanish painter Francisco Goya and comments on an especially troublesome aspect of an artist's body of work.

For the exhibition's curator, Gean Moreno, who also serves as director of the ICA Miami’s Knight Foundation Art + Research Center, this period of Alfonzo’s work has increased in vitality. “In the three decades since these works' creation, and since Alfonzo's untimely death in 1991, his last paintings have continued to grow in their meaning and cultural resonance," Moreno tells New Times. We can now look at these final works by the artist and interpret them against Alfonzo's practice at large, his biography and their social context — and significantly, their witness to the AIDS crisis.”

Installation view of "Carlos Alfonzo: Late Paintings" at the Institute of Contemporary Art, Miami.
Photo by Zachary Balber
Upon entering the exhibition, the viewer is greeted by imposing large-scale works, beckoning to be studied up close in order to understand the complexity of texture and technique while taking in symbols and visual language from afar. Each canvas is not just filled with black, but illuminated with gray, dark greens, deep reds, and burnt oranges that signify the complexity of emotions Alfonzo endured during his painful final years. The works exude remorse and regret, with sharp iconography of impaling nails and ghastly shadows scattered throughout.

Yet a fight is depicted in each work. The horizontal compositions of Cimetière marin (Cemetery by the sea) (1990) and Blood (1991) are jumbled and packed to the brim with the hallucinatory, haphazard communications of an ill man. The first alludes to French poet Paul Valéry’s 1920 meditation on mortality and death, while the latter is one of the last paintings the artist worked on before his death. One can only attempt to empathize with the physical, emotional, and mental toll the disease took on Alfonzo, especially given the era's stigma toward gay men and the disproportionate impact of AIDS on the community.

"The exhibition will only help further cement Alfonzo's place as one of the preeminent painters of the 1980s."

The set of ten paintings conjures this idea of reckoning with one’s mortality, whether that means finding peace with the inevitable or the opposite: fighting for your life and doing whatever it takes to endure and survive. For Alfonzo, the repeated imagery of bent knees, in reverence or even in a fallen state, is in continuous motion. It’s a cyclical act of submission to the divine if one believes or the uncontrollable forces if one does not that results in the works' spiritual quality. The artist was known to draw upon Santería rituals, Rosicrucianism, and Catholic ideology throughout his life and body of work, igniting the feel of a cathedral or beatific sanctuary.

The possible analyses of Alfonzo's heavily layered and charged compositions are endless. Yet Miami, as the primary foundation and common thread from which to draw information and research pertaining to the artist, is reflected in Alfonzo’s decade in the Magic City. "We consulted with a number of Alfonzo's peers — those who best knew him during his productive years in Miami," Moreno explains. "We also consulted as many archives as were available to us, including Alfonzo's own archive, which he left with friends and holdings at Vasari Archive at Miami-Dade Library and the Cuban Heritage Collections at the University of Miami."

"One of the greatest rewards has been to be able to bring all these powerful paintings together once again," Moreno says. "It is hard to explain the emotional range and grave energy of these works to anyone who has not stood in a room full of them. They imbue the museum space with an almost-liturgical air. The other reward has been to think through some of the deep questions about human mortality that the paintings address while constantly being reminded that they come out of a very specific moment: the tragic one in which Alfonzo's friends were dying of AIDS-related diseases, and he himself was on the way to a premature death.

"The exhibition — the power of seeing all these late works together — will only help further cement Alfonzo's place as one of the preeminent painters of the 1980s. I think that the exhibition will also have the positive effect of reminding us — and young artists in particular — of the type of serious questions that painting is still able to address and the powerful emotional tones that it can generate."

"Carlos Alfonzo: Late Paintings." On view through November 27, at Institute of Contemporary Art, Miami, 61 NE 41st St., Miami; 305-901-5272; icamiami.org. Admission is free.
KEEP MIAMI NEW TIMES FREE... Since we started Miami New Times, it has been defined as the free, independent voice of Miami, and we'd like to keep it that way. With local media under siege, it's more important than ever for us to rally support behind funding our local journalism. You can help by participating in our "I Support" program, allowing us to keep offering readers access to our incisive coverage of local news, food and culture with no paywalls.
Make a one-time donation today for as little as $1.