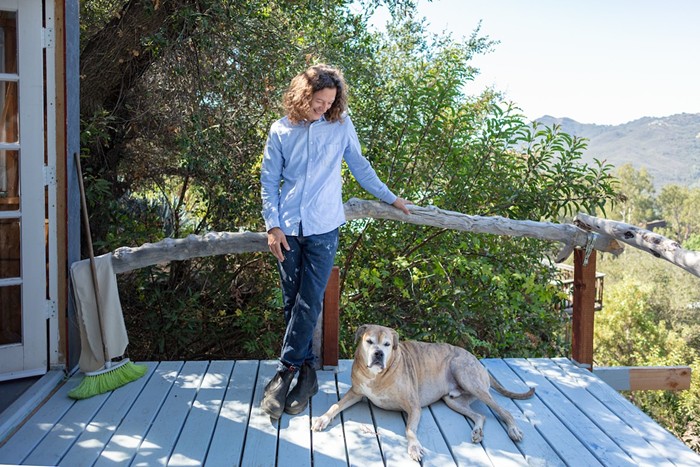 Bhakti Baxter lives and works in Topanga State Park in the Santa Monica Mountains.
Photo by Morgan Waltz
Unlike some visual artists who hole themselves away in dark, dank studios to remove all external distractions, Bhakti Baxter prefers to let his surroundings influence and inspire his works. For his latest batch of paintings and drawings, the Miami native even invited the elements to play a leading role in the creation process.

Baxter, who currently lives and works within the confines of Topanga State Park, a sanctuary of peace in the Santa Monica Mountains located just 30 miles west of downtown Los Angeles, says the beauty that surrounds him each and every day has had a direct impact on the visual identity of his latest works.

“I am surrounded by so much nature and beauty. The seasons and dramatic changes in the climate are things I wasn’t used to growing up in South Florida," Baxter says. "I used to be more muted in my choice of colors, but all of my work is now extremely colorful, super loud, and vibrant. That may have to do with the fact that I’m surrounded by every kind of bird, tree, and flower. Things are happening all the time around me."

“Heat Transfer,” an exhibition of Baxter’s recent paintings and drawings, is on display now through July 31 at the Nina Johnson Gallery. For these works, Baxter enlisted the heat of the sun and the dryness of Southern California’s winds to create paintings that illustrate the geometry, order, and beauty found at every level of life on Earth.


Baxter’s process begins by taking blue chalk to raw canvas, outlining tiered grids that divide the canvas’s two-dimensional plane. Next, the canvas is folded up, soaked in water, and left to dry on a tree. Once the canvas is reopened and stretched, the real magic happens: At a rapid pace, Baxter applies paint mixed with different pigments.

Through trial and error, Baxter has figured out that he has about an hour before the resplendent California sun completely dries the water and paint. He’s also learned that leaving paintings outside overnight, when the clouds and fog roll in over the mountains, causes the paint to sink too deeply into the canvas, losing its boldness and brightness. If conditions are just right, however, the heat of the sun and the dryness of the air capture the paint’s movement midstroke, creating paintings that breathe as if they were animated.

“What happens each time is completely unique to that day and the set of paints that were mixed. It’s a balance between order and chaos,” Baxter explains. “The grid is there to guide me, but what happens within that grid is beyond my control. That is the fun part: seeing where the paint will rush to, playing with that uncertainty, and being surprised at what happens.” 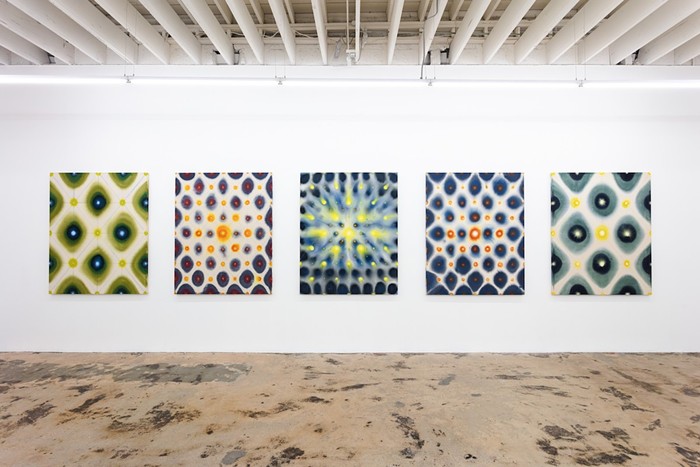 "Heat Transfer" is an exhibition of Bhakti Baxter's paintings and drawings, on view now through July 31 at the Nina Johnson Gallery.
Photo by Bhakti Baxter and Nina Johnson Gallery
Long before he relocated from Miami to Topanga three years ago, Baxter’s artistic practice developed as an act of communion with his natural environment, an offering of reverence for the perfect geometry that exists within life, a fact of science that Baxter considers spiritual. During college, Baxter’s art featured found, natural objects: “roots, shells, rocks, and different pieces of earth.” In recent history, he’s found a muse in the atomic structure of crystals, as seen in photos from under a microscope’s lens. Within the straight lines of crystal structure, Baxter found a sight at once familiar and otherworldly.

“In photos, the atoms in crystals look like this celestial order that was extremely organized and rectilinear. Humans often build in square grids. In nature, that’s not very common, but it is in crystals," he says. "I’m always one to look at abstract art as being a better representation of something than a highly realistic, rendered image. In the case of these crystals, you have this beautiful, abstract image that is showing something very real, but out of context, it looks like a UFO sighting or something. That really struck me. It took on a life of its own. What we learn in science has a counterpart in the metaphysical world. I’ve never seen them opposed to each other. The more we know from a scientific point of view, the more the behavior of mysterious activity of all life can be described."

The final piece Baxter created for “Heat Transfer” is titled Eternally Regenerative Universe. That title hints at the ideas — equal parts scientific and spiritual — that he’s been mulling over for years.

“Fractal geometry hints at an eternally regenerative universe that is self-similar at every scale. As you go up to this piece, you see all of these micro-universes within it. The experience of looking at it changes dramatically with your distance from it,” he says. “It’s about the systems that are everywhere on every scale. You have to pay attention to see the reoccurring patterns.”


Nina Johnson, owner of the Nina Johnson Gallery in Miami, says though she’s worked with Baxter for many years, she always finds something new to discover in his practice. She’s drawn to the “sunbaked and earthen” feel of this new batch of works, and she says visitors to this exhibition might find themselves feeling a bit more at peace after viewing.

“This exhibition feels quite meditative and healing,” Johnson says. “There’s a universality to the kind of abstraction that Bhakti is exploring. It’s as linked to science and discovery as it is to transcendentalism and meditation. I feel that applies to audiences everywhere and is a space we could all explore given the trauma of the past year.”

Visitors to “Heat Transfer” might find the act of viewing its pieces breathtaking and entrancing, but ultimately, Baxter hopes they remember that they too are part of this miracle called life.

“Everything is incredibly unbelievable to me, from the fact that I’m breathing to my heart beating. That’s mind-blowing to me. What I hope comes across in this exhibition is some beautiful order in all of the chaos and to see that order in you. That’s what art is — we have an experience of something that is difficult to talk about but very tangible to feel. I hope this art inspires a recognition of something miraculous that is also within each viewer.”

“Bhakti Baxter: Heat Transfer.” On view through July 31, at Nina Johnson, 6315 NW Second Ave., Miami; 305-571-2288; ninajohnson.com. Admission is free.
KEEP MIAMI NEW TIMES FREE... Since we started Miami New Times, it has been defined as the free, independent voice of Miami, and we'd like to keep it that way. With local media under siege, it's more important than ever for us to rally support behind funding our local journalism. You can help by participating in our "I Support" program, allowing us to keep offering readers access to our incisive coverage of local news, food and culture with no paywalls.
Make a one-time donation today for as little as $1.