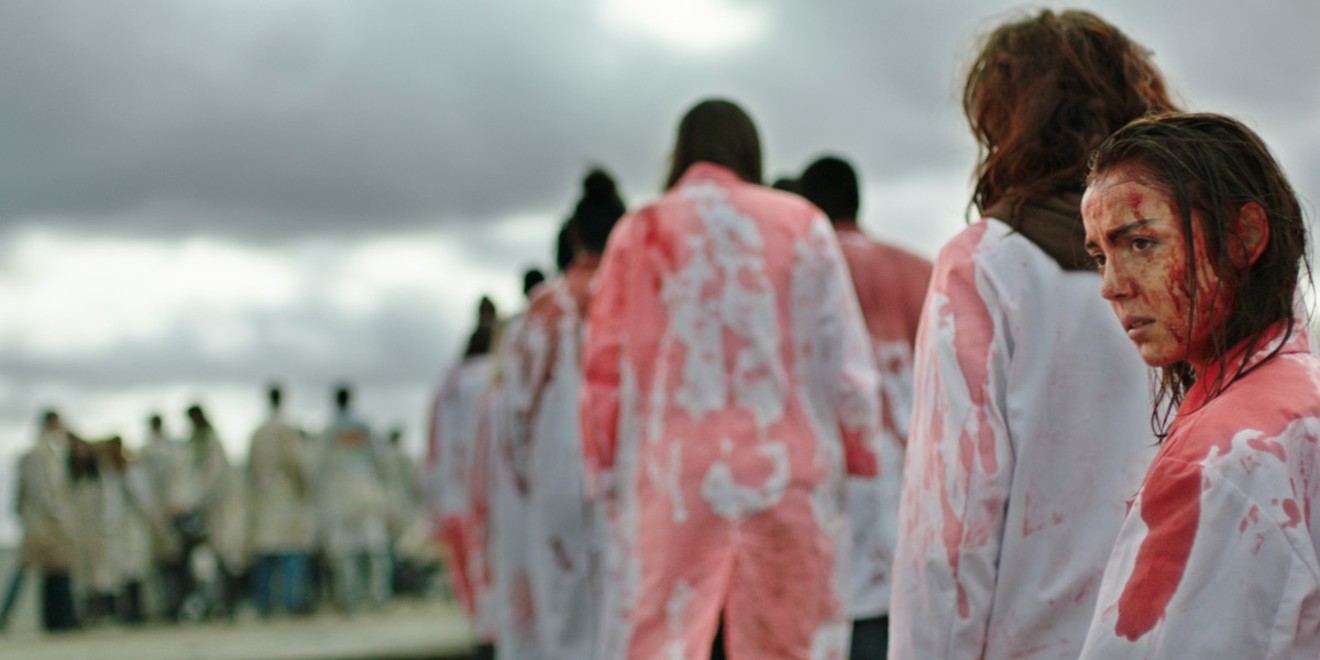 Raw Focus Features
Everyone has, at some point, fantasized about being someone else. In Julia Ducournau’s Raw, we see that longing literalized in an unusual way: not just by dressing up like other people or copying their actions, but by eating them.

In Ducournau’s film, a vegeterian college freshman deals with a level of hazing that awakens certain, uh, feelings in her. Cannibalism might not be relatable to the average filmgoer, but the character of Justine (Garance Marillier) certainly is.

"I wanted to repulse people," the filmmaker admits, "but the challenge was keeping the empathy of the audience on a character who would commit an act that would be repulsive and make them feel what she's feeling in spite of that."

She laughs, saying she often reassures viewers they're supposed to empathize with a cannibal. "You’re not a weirdo" if you do, she explains. Beneath the surface of body horror, Raw focuses on the primary relationships in Justine’s life: her sister and her gay roommate. These characters interact in atypical ways, because Ducournau dislikes categorizing people.

“I hate to define things and hate things that are predetermined,” she explains, “and my movie is all about that: It’s someone who is fighting many determined people who want to put her in many boxes, whether it’s family or society. Those determiners are things she imposes on herself because she has been brainwashed, to some level, to be the good girl.”

Adrien (Rabah Naït Oufella), the protagonist's gay roommate, is in complete contrast to Justine’s good-girl façade. He’s open in every aspect and “representative of freedom.” Though the film doesn’t show his backstory, Ducournau says, “he has this story that starts before the film. He’s not a virgin; he has lived and had to fight to be himself, and this is why they can have this relationship that’s outside of the norm. He’s free, and she doesn’t fit. And in this world where you have to fit in a box to be accepted, these people are everything to each other. They can be brothers, best friends, and lovers altogether, and it doesn’t say anything about their sexuality.”

The relationship between Justine and her sister Alexia (Ella Rumpf) is just as compelling. Ducournau says she finds the concept of sisterhood “incredibly cinematographic.”

“You can really show a continuity between scenes, where one minute they love each other and afterwards they hate each other and then love each other again, and you don’t have to explain in between why they go from one extreme to another. The bond explains it," she says. "This is in our culture, in the text of our literature, our religions and myths; they all portray sibling relationships that are incredibly extreme, sometimes supergory, and that define themselves in too much love — love that eventually becomes toxic or threatening for one of the siblings.”

A number of other French films have touched upon this kind of intense sisterhood, notably Catherine Breillat’s À Ma Sœur! (better known as Fat Girl), which Ducournau says she loves, though it wasn't a direct inspiration for Raw.  “I might have thought about it in a very subconscious way,” she muses. “I really like this movie for the relationship between the sisters. It’s incredibly beautiful and painful at the same time and full of love and disgust. The way they almost share the same body and are completely mutual, there’s a lot of common themes with Raw. And the ending is so incredibly amoral, something I remember was a huge shock when I saw it the first time, but from this amorality there was this beauty and freedom that came from it.”

That extremity and overlapping of bodies is fascinatingly explored in Raw. Ducournau jokes about how obsessed she is with them. “I don’t want to be a cliché of myself,” she laughs. “I built up this relationship by thinking of a body cell that was dividing during mitosis. There’s always some loss and something is torn out. The two cells that result from this painful separation look exactly the same, but they are, at the same time, incredibly different because they are no longer one cell.”

Raw, then, is about what happens when the siblings try to draw themselves back into each other while remaining their unique selves. “There’s a French anthropologist, Claude Lévi-Strauss, who studied cannibalism and was talking about this child in Brazil who ingested pieces of the bodies of their enemies to annihilate them and gain their forces,” the filmmaker explains. “I thought that [Justine] admires her sister so much, her sister takes so much space in her life, that she somehow wants to be her and she wants to beat her at the same time.”