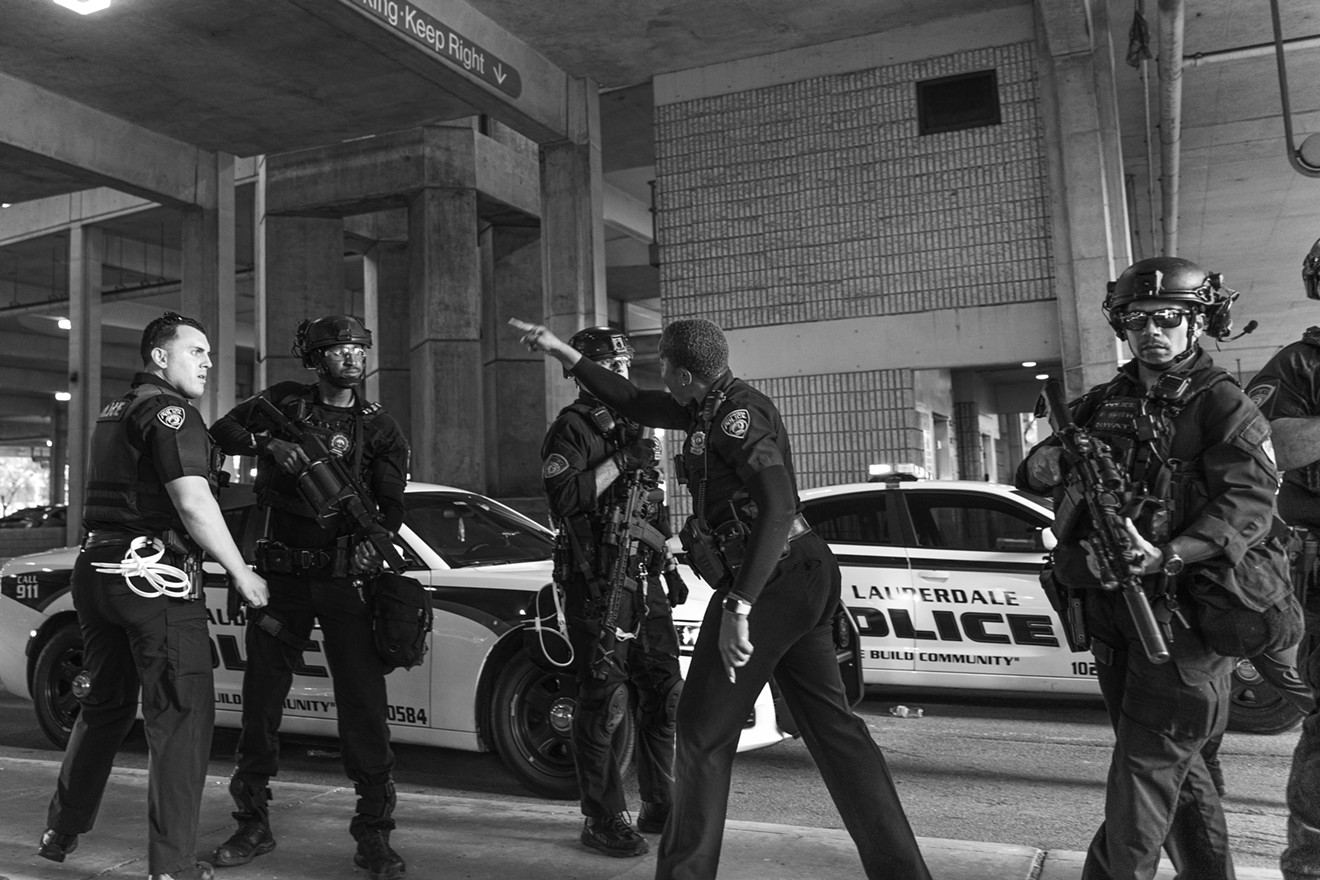 Fort Lauderdale police officer Krystle Smith admonishes fellow officer Steven Pohorence after he pushed a kneeling protester onto the ground during demonstrations on Sunday. Photo by Alex Dixon/@dix.jpg
Alex Dixon, a Miramar-based photographer, took to the streets of Miami and Fort Lauderdale all weekend with thousands of others to protest the killing of George Floyd by Minneapolis police officers.

He took his camera with him. Dixon says he wanted to be at the center of the demonstrations to document powerful moments and emotions.

The protests were mostly peaceful, but tensions shifted in the evenings. In Miami on Saturday, police cars were burned, and officers used rubber bullets and tear gas on the crowds. In downtown Fort Lauderdale on Sunday, police and protesters clashed, and officers dispersed tear gas into the streets.

A viral video taken outside of a Fort Lauderdale parking garage Sunday shows an officer, identified by the Fort Lauderdale Police Department as Steven Pohorence, walking toward a man who was backing away from the officer. Protestors yelled at Pohorence, telling him not to touch the man. The officer appeared to tell the crowd to scatter, and the group of protesters moved. Some backed away from Pohorence, while others got closer to record what was happening.

Pohorence was briefly encircled in the group. When he turned around to walk away, he forcefully pushed a protester who was kneeling behind him, sending her face-first onto the pavement.

A second Fort Lauderdale police officer, identified as Krystle Smith, then shoved Poherence away from the crowd, followed him into the garage, and rebuked him for putting his hands on the protester.


White police officer throws a girl who is already on her hands and knees BUT a BLACK QUEEN officer steps in to check him ?????#share #protests2020 pic.twitter.com/nKmvF6Oiqu

Dixon was at the center of it all.

"I just held my camera up, pressed the button, and hoped for the best," he tells New Times. "But I was trying to protect myself, too. For me, I was feeling so much emotion. [The crowd's] emotion was contagious — a mix of fear and rage at the same time."

Protesters kept recording and followed close behind the officers. So did Dixon. He captured Smith admonishing her colleague while demonstrators cheered her on.

"Everything happened so quickly," Dixon says. "And it was so loud. I could hear everything but couldn't make out anything. I couldn't hear what she was saying to him, but I could feel it."

The Sun Sentinel reports that shortly after Pohorence shoved the protester, police unleashed tear gas and rubber bullets. Officials blamed outside agitators for the clashes, but some activists told the newspaper it was police who instigated the violence.

"From what I witnessed, it seemed like the police were getting ready to go to war and the protesters were unarmed and the police had their large weapons out for intimidation. It was a very scary dynamic to be in," Tifanny Burks, a community organizer for Black Lives Matter Alliance Broward, told the Sun Sentinel.

Four Minneapolis police officers were fired and one was charged with third-degree murder and second-degree manslaughter after Floyd's death. Two of the officers helped pin down Floyd while he lost consciousness under Derek Chauvin's knee. A fourth watched nearby. The former officers supporting Chauvin have been heavily criticized for their complicity and inaction.

For her intervention, Fort Lauderdale officer Krystle Smith has been praised on social media.


And that’s what you should do.

Stop taking a knee in planned photo ops and stand up like this sister when you see someone mistreated. https://t.co/X59A69dKHb

"If you see the wrong, you can do something about the wrong," Dixon says. "And that's what that lady did."

Melba Pearson, former deputy director of the ACLU of Florida and a candidate for Miami-Dade state attorney, lauded the officer on Twitter.

"I'd love to meet her and shake her hand," Pearson tells New Times.

Pearson says cops need to feel empowered to call out a fellow officer for doing something improper, or to report them to internal affairs if they're a threat to the public, without feeling like a "snitch."

"I encourage officers to do that, because that behavior is what's going to help rebuild trust in communities of color," Pearson says.

The Fort Lauderdale Police Department said yesterday that Pohorence worked for the Florida Highway Patrol before being hired by the department in 2016. Pohorence has been relieved of duty and faces a criminal investigation by the Florida Department of Law Enforcement.

Fort Lauderdale Police Chief Rick Maglione told the Sun Sentinel that his department will conduct an internal investigation into whether Poherence violated policies.
KEEP MIAMI NEW TIMES FREE... Since we started Miami New Times, it has been defined as the free, independent voice of Miami, and we'd like to keep it that way. With local media under siege, it's more important than ever for us to rally support behind funding our local journalism. You can help by participating in our "I Support" program, allowing us to keep offering readers access to our incisive coverage of local news, food and culture with no paywalls.
Make a one-time donation today for as little as $1.