He opens the doors to the Colony Theater’s main stage and flips the switch to turn on the lights. All 417 seats are empty, and the area is set for the closing night performance of Papá Cuatro. In the center of the stage is a single lightbulb attached to the top of a tall, black stand. The ghost light is an old theater tradition that some say is meant to protect the stage against — you guessed it — ghosts. Others say it’s for safety purposes.

For Hausmann, it’s likely a bit of both.

The Venezuelan sits with his back against the stage; however, he glances up at the ceiling of the theater every so often. Mischievously, he says, “I’m going to let you in on a little secret.” He points to a spot on the ceiling at a large square vent. On either side of the vent are two lightbulb holes that look like a pair of eyes, and just above that is another small square that looks like a nose. That, says Hausmann, represents the omnipresent gaze of Dionysus, the god of theater.

“Sometimes I sit and look up at the god of theater, and I can feel the weight of what we do in this tradition that has existed for more than 2,500 years,” he says.

“Theater is theater. We will always be on the brink of extinction, but we will still be here.”

Hausmann kicks off the floor and leans on the back two legs of his chair. As he looks around at the empty seats, he puts his hands in his pockets.

The artistic director describes planning a season for Miami New Drama as entering a garden. Throughout the year, he commissions various plays about all sorts of topics. And much like vegetation, each is in its own unique phase of development. Some might be more fully formed and ready to be plucked, whereas others need more time and attention. This is where the expert gardener, Hausmann, comes into the analogy.

He removes his hands from his pockets and pulls out his car keys. As he toys with the keys in one hand, he says, “Before each season, I enter the garden and figure out which [plays] are ready to be produced.”

Hausmann and his team are ready to deliver a memorable 2022-23 season with three world premieres and one special anniversary production.

Kicking off the company’s sixth season is Elián, written by Rogelio Martinez, which is about Elián Gonzalez and the infamous events of 2000 that put the Magic City — and the Cuban community — on a national map. The show will run at the Colony Theater from October 27 through November 20. 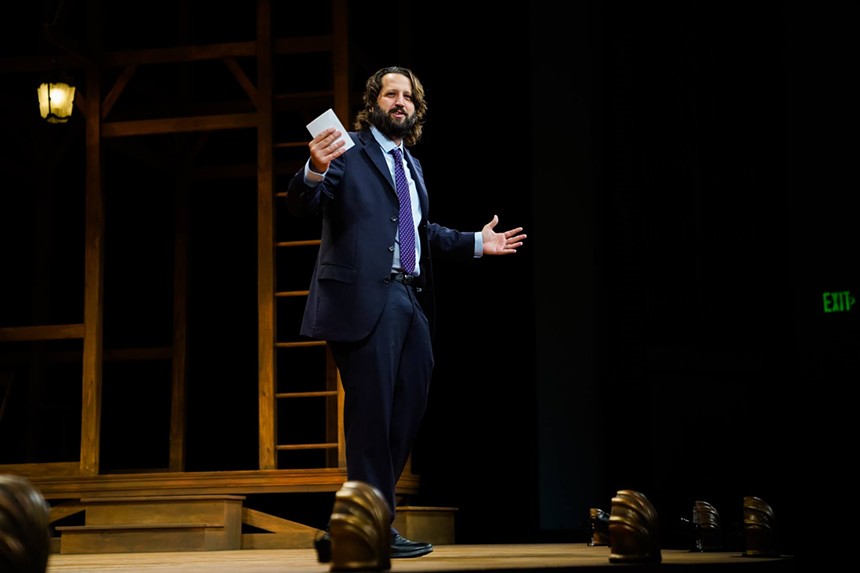 He pauses, searching for the words in his mind. "It's going to pull back the curtain behind [to reveal] what you didn't see through the media."

The season's second production is not a typical Miami New Drama commissioned piece. Instead, the company will put on a special anniversary production of the Pulitzer Prize-winning show Anna in the Tropics by Nilo Cruz.

"I realized that this year was going to be the 20th anniversary of Anna in the Tropics," says Hausmann, "and I thought how it has not been professionally remounted since the first time it was done… this is a made-in-Miami success story and we wanted to give it a proper 20th anniversary production."

Cruz himself will be directing the Miami New Drama production of his award-winning play about a cigar factory in Miami and the lives of its workers.

Earlier this month, the Miami Herald reported how the Miami-Dade County Public School System denied students from seeing Cruz's play due to "racy" scenes. Hausmann and his team at Miami New Drama are moving forward with the production and issued a statement on the controversy, stating, "We want to continue to inspire the next generation... because we believe that theatre and art are the best tools for it; tools for change, empathy, reflection, and exploration."

For the last four years, the theater company has produced an original, new work by playwright Aurin Squire. Keeping with that accidental tradition, the third production of the season will be Squire's Defacing Michael Jackson.

"It's a play that looks at the race riots of the 1980s," says Hausmann. "It's a coming-of-age story. It's funny and quirky at times, but it really tells the story of Black Miami. It's a story about Opa-locka told by a Black Miamian from Opa-locka."

Closing out the season in May of next year is the pièce de résistance, as Hausmann puts it, an adaptation of author Edwidge Danticat's book of essays titled Create Dangerously: the Immigrant Artist at Work. The play, which goes by the same name, was adapted and directed by Lileana Blain-Cruz.

Hausmann admits he's been wanting to work with Blain-Cruz for years. "I think she's the most important theater director of my generation – and she happens to be from Miami," he says with a smile.

"It's really extraordinary that we get to work with these world-class artists this season."

"We have to champion our [Miami] artists," adds Hausmann proudly. "And it's so easy to champion them because they're so good."
KEEP MIAMI NEW TIMES FREE... Since we started Miami New Times, it has been defined as the free, independent voice of Miami, and we'd like to keep it that way. With local media under siege, it's more important than ever for us to rally support behind funding our local journalism. You can help by participating in our "I Support" program, allowing us to keep offering readers access to our incisive coverage of local news, food and culture with no paywalls.
Make a one-time donation today for as little as $1.