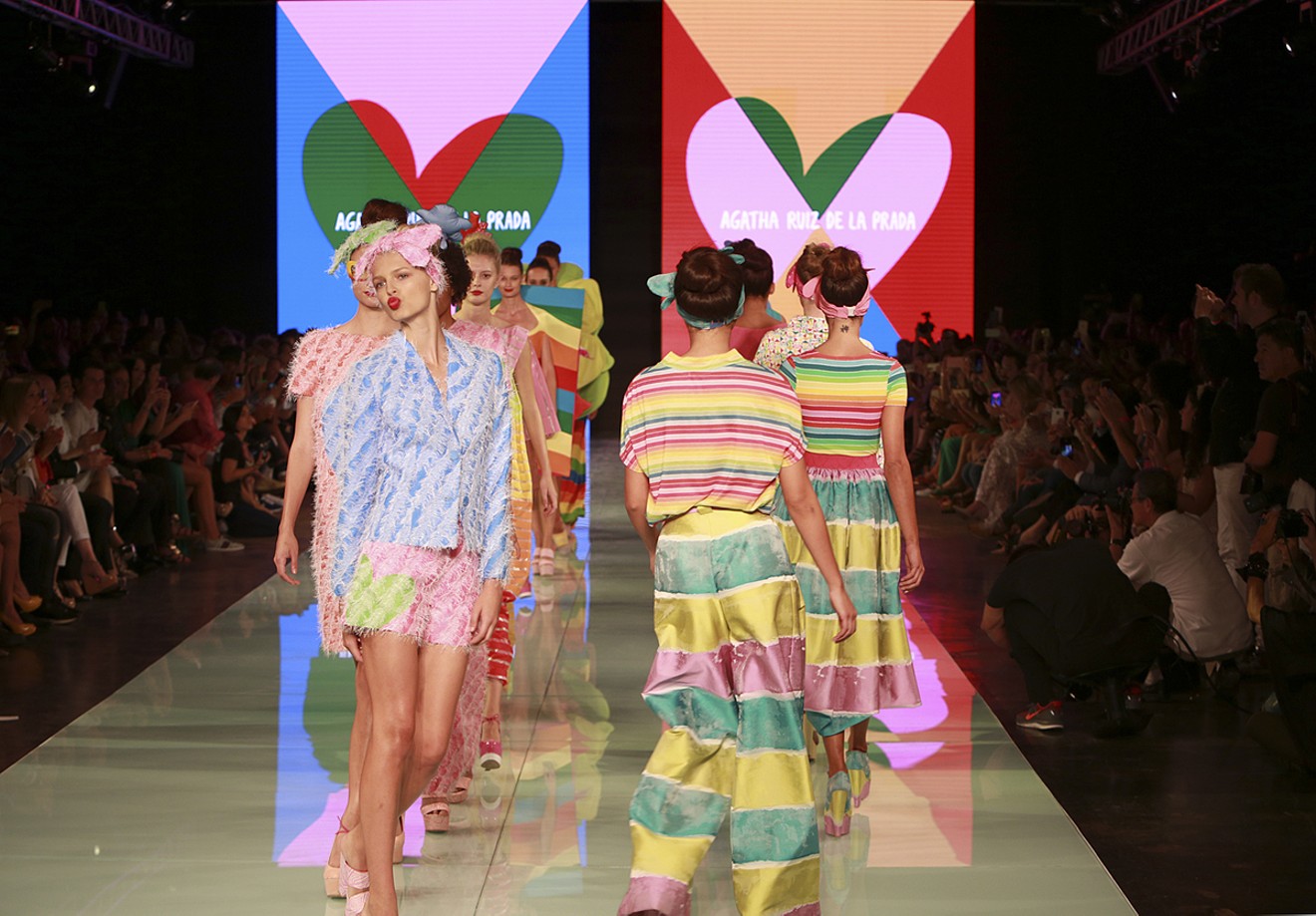 Miami isn't exactly a fashion capital. Though the city has emerged as a resort destination for the world's wealthiest, and a slew of luxury retail centers such as the Design District and Brickell City Centre court big spenders, fashionistas still turn up their noses at Miami's nascent clothing design industry.

At Miami Fashion Week, all designers must debut a never-before-seen resort-wear line.

But Miami's fashion community, though relatively small, has long been a force in the city's cultural milieu. A host of designers run their operations from the Magic City, serving a hyperlocal clientele, and happenings such as Miami Fashion Week and Miami Swim Week are long-standing industry events. But aside from hype surrounding recently opened retail centers, can the city truly emerge as a destination for runway events?

The new owners of Miami Fashion Week have a theory: Rather than try to make Miami something it's not — a fashion destination that rivals New York or Milan — the event should capitalize on the city's vacation allure and position itself as the go-to for resort collection buyers for its 2017 run, which will kick off Wednesday, May 31, at the Saks Fifth Avenue in Brickell City Centre and run through June 4 at various venues around town.

Iranzo, a cultural entrepreneur whose multifaceted business interests include theater production and real estate, got involved with Miami Fashion Week (MFW) in 2014. "We understood that an opportunity existed to do a catwalk in Miami because we saw that the city had changed a lot in the last eight years," he says.

At that time, Miami Fashion Week was run by ex-model Beth Sobol. She founded the event about 20 years ago with the goal of presenting emerging international designers and launching their careers. Iranzo recognized that Sobol's event had the potential to elevate Miami as a global destination for fashion. In 2015, Iranzo and a team of partners took control of the storied event and rebranded 2016's Miami Fashion Week as the world's only resort runway show. 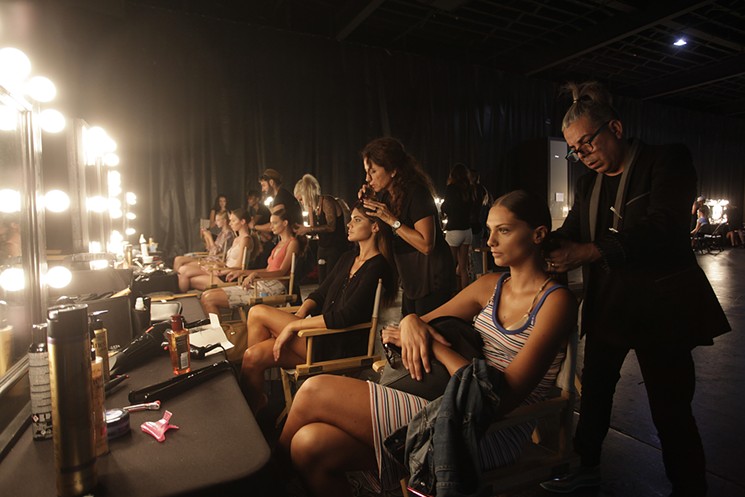 Resort-wear collections tend to have an increasingly vital economic impact on major fashion brands and retailers. Designed for jet-setting consumers seeking vacation wear in the cooler winter months, resort wear is usually offered as exclusive capsule collections with limited availability and higher price points. Though not every fashion brand offers a resort-wear collection, high-end luxury players nearly always do — and they tend to present their collections at the spring and summer shows rather than showcasing the season as its own, singular event. Iranzo thinks that's a missed opportunity for many contemporary retailers, which could effectively make resort wear a substantial percentage of their annual business.

"Because we realize that resort wear is having an increasingly important economic impact for brands, we're requiring that all designers debut a never-before-seen resort-wear line at Miami Fashion Week," Iranzo says.

One reason is that Iranzo has once again tapped Sergio Salerni — an Italian fashion runway designer whose company Urban Production has designed runway shows for brands such as Fendi, Versace, and Valentino in Milan, Paris, and London — to design the 2017 Miami Fashion Week runways. Together with ESMA Proyectos from Barcelona, Miami Fashion Week will produce eight runway shows and a host of special events, including a benefit gala hosted by honorary Miami Fashion Week president Antonio Banderas.

Along with a committee of designers and fashion insiders in Milan, Iranzo and his team selected a roster of designers based on quality and craftsmanship while focusing on highlighting emerging contemporary designers. Participating designers include Miami favorites such as Rene Ruiz and Silvia Tcherassi, along with international brands like Custo Barcelona, Físico, and Angel Sanchez.

Perhaps most important, 2017's Miami Fashion Week has drawn attention from the fashion world's most notable group. The Council of Fashion Designers of America (CFDA) has officially added Miami Fashion Week to its annual calendar, highlighting the importance of the show for contemporary retail buyers across the globe.

"One of the reasons CFDA added us to their fashion calendar was that they're seeing that more and more designers are showing resort, and they're having a hard time because brands want to show resort at a destination," Iranzo says. "They want Miami Fashion Week to be a complement to New York Fashion Week, and CFDA understands that Miami can be that extension."

In addition to garnering support from CFDA, Miami Fashion Week will also be broadcast on television worldwide, thanks to a partnership with NBC Universal, Telemundo, and E! Entertainment. Backstage: Miami Fashion Week will air in 26 countries and take viewers behind the scenes of the weeklong runway event. The show is expected to reach millions of viewers, particularly across Latin America, where Miami is already seen as a gateway to high-end and luxury fashion.

That reach is exactly why Miami designer Rene Ruiz felt honored to join the Miami Fashion Week roster. "My brand does very little PR and marketing," Ruiz says, "but participating in Miami Fashion Week last year got me noticed by women across the country." Ruiz, who for more than 35 years has designed evening wear for local clients, is launching his first resort collection at MFW. "Resort is becoming more and more important for brands and labels," Ruiz says. "If you look at big labels like Dior and Valentino, you see how extensive resort collections are becoming, even more so than prefall."

Still, it's unclear whether Miami Fashion Week is designed to promote business or simply show off the clothes. Typically, runway events are accompanied by trade shows and opportunities for appointment-setting with designers and retailers so that buyers can write orders for apparel onsite. Iranzo confirms several international and domestic buyers will be in attendance, but he notes the best opportunity for designers to network and meet potential buyers is at the opening party.

"I think whether or not buyers will be writing orders will be decided on a case-by-case basis depending on designer and buyer," he says. "I think the best opportunity to strategize and establish contact is at the kickoff party at Brickell City Centre, where we'll have buyers from Saks Fifth Avenue and more."

As the 305's international profile as a fashion capital continues to rise thanks to events such as Miami Fashion Week, local designers hope all the attention will translate to more sales and recognition.

"There are more international brands and designers coming and setting up retail establishments in Miami," Ruiz says. "People are coming and looking for the next big thing. I think we're all very hopeful."