Mana Contemporary at 777 International Mall to Close Down in January 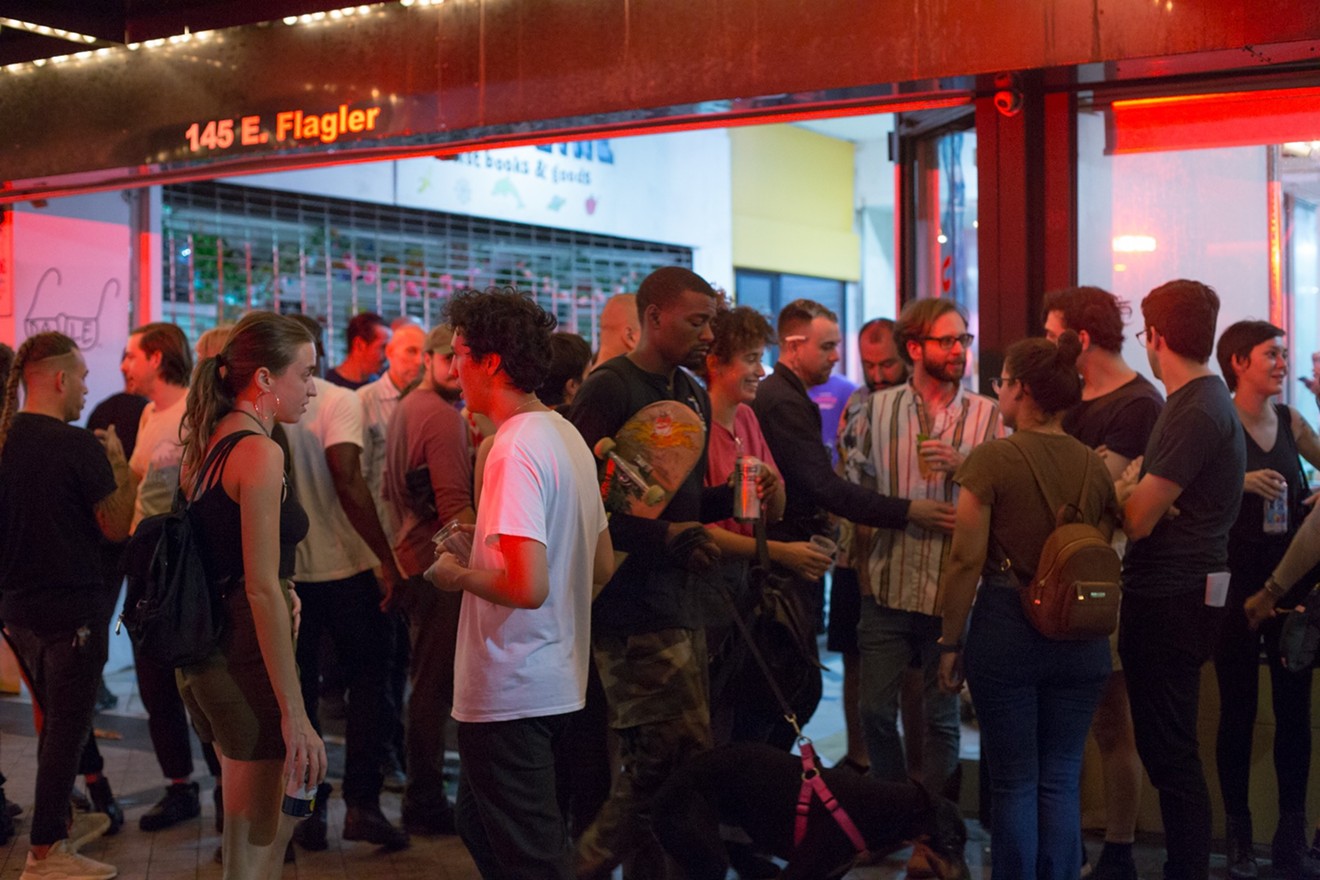 In an email, Nerissa Cooney, acting head of community for the cultural center, informed tenants that the space would "permanently close effective January 8, 2021. You will need to have moved out of your studio before this date."

Cooney pointed to the building's condition as the reason for its closure, noting that the mall has "been professionally assessed, and the number of major repairs required to safely re-open the Mall [are] prohibitive."

It remains unclear what Mana intends to do with space, other than a statement from a representative that the site will remain "art-centric."

What is happening to the artists at 777 International Mall, on the other hand, seems to be following a familiar pattern in Miami and elsewhere: A deep-pocketed developer buys up property in a neglected area and rents out space at below-market rates to creative types who move in and catalyze gentrification. When market rates rise, the artists are pushed out.

But the pandemic, and the stalled economy it engendered, appears to have shaken things up.

Anyone who has set foot inside 777 knows the property has been in decline for decades. It opened in 1948 as a 1,850-seat movie house called the Miami Theatre, which closed down in 1978 and subsequently was repurposed as a small shopping center in the '80s.

In 2014, billionaire developer Moishe Mana purchased the property, paying $14.25 million for the structure and the 18,566-square-foot lot on E. Flagler Street where it stands, according to Miami-Dade County property records. By late 2019, according to the Real Deal, Mana had "amassed nearly $375 million worth of properties downtown totaling over 1.3 million square feet of buildings on about half a million square feet of land." He's now the biggest property owner in both downtown and Wynwood.

In 2017, Mana rechristened 777 as Mana Contemporary Miami and allowed artists and arts organizations to move into the dilapidated but architecturally captivating location. Modeled after Jersey City-based Mana Contemporary’s headquarters and its affiliated Chicago campus, 777 has served as the organization's Miami base, encompassing artist studios, exhibition spaces, and programming for a broad clientele of local creatives. In the space of three years, 777 became an integral part of Miami’s underground culture, supporting an underserved section of the arts community.

In a March 2019 story, the Miami Herald's Andres Viglucci wrote that Mana and Mana Contemporary director Eugene Lemay aimed to "give Miami’s fledgling art community the physical center it lacks, a public profile beyond the annual Art Basel-fed Miami Art Week and a measure of long-term stability for artists."

But when the pandemic struck a year later, 777 was shut down in order to comply with county regulations. Tenants were off the hook for the rent, but the upheaval dealt a blow to the arts community all the same.

"People have set up their lives assuming they have studio space," says artist Laurencia Strauss. “I know a couple of people who are really struggling with what they’re going to do and will probably have to get a storage space to put their stuff in. Once you put something in storage, it’s hard to activate again.”

In Strauss' view, Miami needs cultural spaces where artists are free to be creative.

“One of the things I loved about the space was that it was weird and quirky, and there was freedom there," she says. "I hope that people can work with Mana to find another space or creatively organize themselves.”

Raphael Vargas Bernard, community and programming manager of 777 since 2017, says the permanent closure came as a surprise.

Bernard came to Miami at the end of 2017 for a residency at 777. During the residency, he was approached by Mana Contemporary to help turn the mall into the thriving community center it would become. In April, he was furloughed when the mall was temporarily closed, then brought back onboard a week before the announcement to, in his words, help "close the chapter for Mana Contemporary at 777."

"I’m affected just as much as all the other artists there," he says. "Besides being the manager, I'm also an artist and have my studio there too. In this difficult economic and pandemic situation, I have to figure out what to do next."

"Lots of artists in Miami have been making these agreements with property developers for many years — Mana isn't the only one."

Bernard now has the unenviable task of helping tenants during the transition and communicating their needs to the organization.

“There probably isn’t another location where the same kind of cohesive community can be achieved,” Bernard concedes, “but there is a possibility that individual studios can be found for the artists."

Albert Maloof Berdellans III, the Mana Group’s vice president of marketing, says that while the facility has been in need of renovations for some time, it wasn’t until the pandemic hit that the need to redo the space became urgent to them.

"It's just not adapted well for COVID-19 protocols, with social-distancing and stuff like that," Berdellans explains. "The slightly overdue renovations became more pressing — the way that things are spaced out, potential bottlenecks — we feel more comfortable doing them now."

Once the artists move out, Berdellans says, the mall will be inspected thoroughly before renovations begin.

“When you’re talking about renovating an entire building, you need it clear of belongings," he says. "Then we’ll know how long it will take and what we’ll need to do to get it up to the protocols that are required."

Berdellans says the intention is to keep the building as "an art-focused space" but doesn't offer much detail beyond that.

In the meantime, Mana Contemporary is collaborating with the Downtown Development Authority to move many of the artist’s exhibitions to storefronts along Flagler Street and around downtown.

"So it's not like we’re shuttering all our art endeavors. We're just refocusing on things that can work in a socially distant world," Berdellans says.

Liz Ferrer, a current resident of 777, and her creative partner, Bow Ty, applied for a 30-day contract with the DDA for a storefront. They were told they were approved for a performance series at the Olympia Theater but have yet to receive confirmation.

Ferrer now finds herself grappling with the conflicting emotions of gratitude to Mana and despondency at the ongoing insecurity. While recognizing the privileged position she enjoyed at 777, she's aware of the cycle of dependency between artists and developers.

"I knew what I was getting myself into," Ferrer says. "Lots of artists in Miami have been making these agreements with property developers for many years — Mana isn't the only one. That's how we've gotten by. The little that they helped us, they profit far more — but that's just the way it is. Though I hope it doesn't stay that way."

Ferrer has requested an extension on the January 8 move-out date. She says the eviction notice was the first communication she'd received from Mana since March and that it will take more than a month to find alternate housing for her belongings.

While the next iteration of the mall remains unclear, the next few months will be challenging for its disbanded community.

"When Mana closed in March, we assumed operations would reopen. It appears they've made a different decision," says Nathaniel Sandler, the cofounder of Bookleggers Library, who had left 777 not long before the recent closure notice. "I would hope they're being honest with their community when they say they are putting us out for the sake of our safety."

Mana Contemporary Miami. 145 E. Flagler St., Miami; manacontemporary.com.
KEEP MIAMI NEW TIMES FREE... Since we started Miami New Times, it has been defined as the free, independent voice of Miami, and we'd like to keep it that way. With local media under siege, it's more important than ever for us to rally support behind funding our local journalism. You can help by participating in our "I Support" program, allowing us to keep offering readers access to our incisive coverage of local news, food and culture with no paywalls.
Make a one-time donation today for as little as $1.