Miami’s art scene wouldn’t be the same without Locust Projects, one of the city’s most prominent arts organizations and its longest-running alternative nonprofit art space. Celebrating its 20th anniversary, Locust Projects is releasing a book, fittingly titled The Twentieth Anniversary Retrospective, that documents the many thought-provoking, intense, and zany projects the organization has hosted.

“Locust Projects has always been wonderful at giving opportunities locally and internationally to artists… Having an alternative art space in Miami has meant a lot to a lot of artists. Locust is by artists, for artists, and about artists,” says Dennis Scholl, the founding chair of Locust Projects.

In an interview with New Times, Scholl and his wife Debra Scholl, the current chair, looked back at Locust Projects' most memorable exhibitions of the two decades. "Kori Newkirk: Bixel."
Photo courtesy the artist and Locust Projects
"Kori Newkirk: Bixel." December 3, 2005 - January 4, 2006. Glitter, grass, and gold were on Kori Newkirk’s palette in 2005 when he created his first-ever video installation for Locust Projects. Titled Bixel, the film is inspired by science fiction and biographical episodes. In the nonlinear video, Newkirk explores a verdant landscape wearing gold spandex, discovers a nest of silver spheres, and oozes silver glitter from his mouth and hands.

“Locust has two threads of artists,” says Dennis Scholl. “They have the young emerging artist who hasn’t necessarily shown in an institutional setting and thread of artists who are established but are coming to Locust and doing something completely different. Kori Newkirk is in that second thread… Locust is a place where artists can try things.” 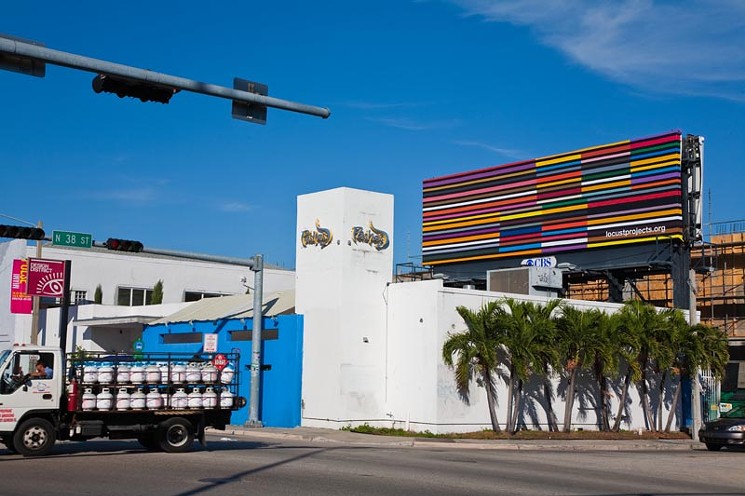 "Ruben Ochoa: Cores and Cutouts."
Ginger Photography
"Ruben Ochoa: Cores and Cutouts." November 12, 2011 - January 28, 2012. Miami is known for its luxurious architecture, but in the site-specific installation Core and Cutouts, marking Ruben Ochoa’s first solo exhibition in the Magic City, he exposes another side of . Dennis Scholl describes: “Ruben came in with a giant jackhammer and punched holes in the floor, lifted up the material, and created a forest of concrete.” "Daniel Arsham: Welcome to the Future."
Ginger Photography
"Daniel Arsham: Welcome to the Future." November 15, 2014 - January 20, 2015. “We spent two months preventing people from falling in,” laughs Dennis Scholl as he describes Daniel Arsham’s project Welcome to the Future. In the installation, the artist dug a large trench in the gallery floor and filled it with a panoply of media devices including Blackberries, boomboxes, SLR cameras, game controllers, film projectors, and VHS tapes. Arsham then covered the materials with crystal and volcanic ash, colliding the obsolescence of the 20th-century devices with references to the preservation of Pompeii after the eruption of Mount Vesuvius. "Martha Friedman: Pore."
Ginger Photography
"Martha Friedman: Pore." November 07, 2015 - January 09, 2016. In the 2015 installation and performance titled Pore, Friedman poured approximately 1,000 pounds of rubber onto the Locust Projects floor in order to make several large, vibrantly hued sheets. After they were suspended, a costume was attached to each sheet, referencing one of the four bodily . During Miami Art Week that year, dancer and choreographer Silas Riener put on each costume, interacted with the rubber sculptures, and embodied the qualities of each of the .

“One of my favorites was when Martha Friedman created these rubber objects that had costumes attached. A dancer came in and wore each of them and performed," says Debra Scholl. “It was an incredible event.” 
Locust Projects: The Twentieth Anniversary Retrospective is available for preorder at trapublishing.com.
KEEP MIAMI NEW TIMES FREE... Since we started Miami New Times, it has been defined as the free, independent voice of Miami, and we'd like to keep it that way. With local media under siege, it's more important than ever for us to rally support behind funding our local journalism. You can help by participating in our "I Support" program, allowing us to keep offering readers access to our incisive coverage of local news, food and culture with no paywalls.
Make a one-time donation today for as little as $1.