Laure Prouvost Tests the Limits of Language at the Bass Gene Pittman
Watching a video by French-born artist Laure Prouvost is like overhearing something in a fever dream. Colors seem impossibly vivid, images move in quick succession with little opportunity for you to comprehend them, and somewhere, someone is addressing you with words that are only vaguely familiar. This melding of the real and the imagined is coupled with Prouvost's blending of video and installation to immerse the viewer in a new, disorienting world.

It was Prouvost's interdisciplinary practice that immediately interested curators at the Bass, including Leilani Lynch, assistant curator and coordinator of Prouvost's upcoming show, "They Are Waiting for You." When the Walker Art Center in Minneapolis organized the original show, the Bass seized the opportunity to bring a version of it to Miami. How it will appear exactly is still an ongoing conversation.

"The way that Laure works, she really customizes it to each venue," Lynch says. "It’s not your typical traveling show. We’ve had a lot of conversations and back and forth between the curators at the Walker, myself, and the artist to see how we can utilize the larger space the museum has. So there’s a certain amount of improvisation that happens."

This improvisation speaks not only to the different spaces but also to a general sense that Prouvost does not see her work as precious, at least not in the way we imagine an internationally awarded artist would. In one video, she follows a reporter with the Guardian through her show at Whitechapel Gallery in London. The reporter accidentally knocks over an element of her installation — a tray of raspberries — and is clearly horrified. Prouvost laughs, kneels to pick up the raspberries, and then begins to eat them. More recently, her talk with Walker Art Center curator Victoria Sung took place within the installation at the museum. The two women sit casually at a table with small sculpted breasts attached to it near an arrangement of half-peeled oranges. They talk briefly about the hours they spent planning that arrangement. Gene Pittman for Walker Art Center, Minneapolis
It's this sense of playfulness that's really central to Prouvost's work. The aforementioned breasts, for instance, are a literal representation of gendered nouns in romantic languages — "table" in French is feminine (la table), as is chair (la chaise). The objects are part of a "waiting room" the viewer is meant to wander through before arriving at the video within the exhibition.

"I wanted to play on this idea of language and what we learn," Prouvost explains in her artist talk. "The waiting room is... asking you to consider what you see, what you know. What’s the name of things? How come you know that this means this?"

It functions partly as a primer for a video that attempts to help the viewer "de-learn" language. At one point in the video, the viewer is presented with an orange, after which Prouvost proclaims, "This is a highlighter." Lynch says it's a kind of mind experiment in translation, something like a gradual deconstruction of image, word, and concept. But that explanation seems too purely analytical when you take into account Prouvost's lilting, almost sexy voice pleading with the viewer to stay. In this sense, the term "waiting room" can be reframed as a room that is pining for you and waiting for you to arrive.

"She’s really distilled these small moments where you’re saying something and it sounds like this, but once you write it down, it means something else," Lynch reflects. "That inherent otherness is sort of interesting. She’s tapping into that seduction." 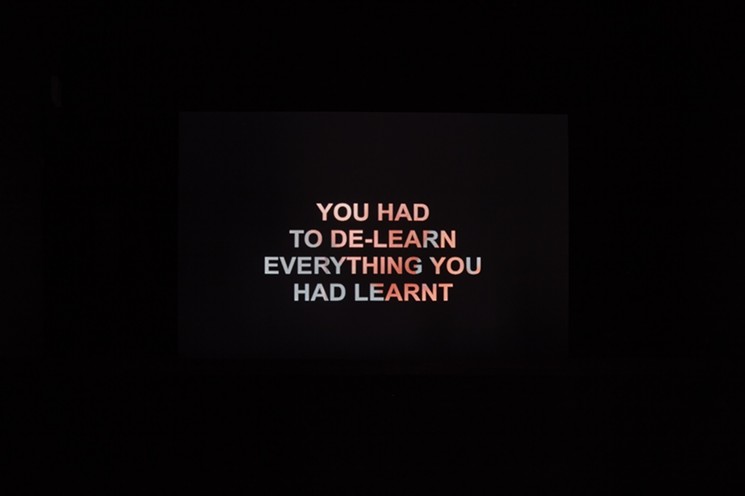 Gene Pittman for Walker Art Center, Minneapolis
When language breaks or fails, Prouvost sees an opportunity first to express that, as she puts it, "life is more complex than words." But beyond the complexity we fail to put into words, Prouvost exposes our own desire to limit our experience, to translate our world into conceivable pieces. What she's offering is the possibility that when we stop separating things into discrete categories, we become more connected.

"Without you, the show is nothing."