Is Miami Becoming a Fashion Capital? 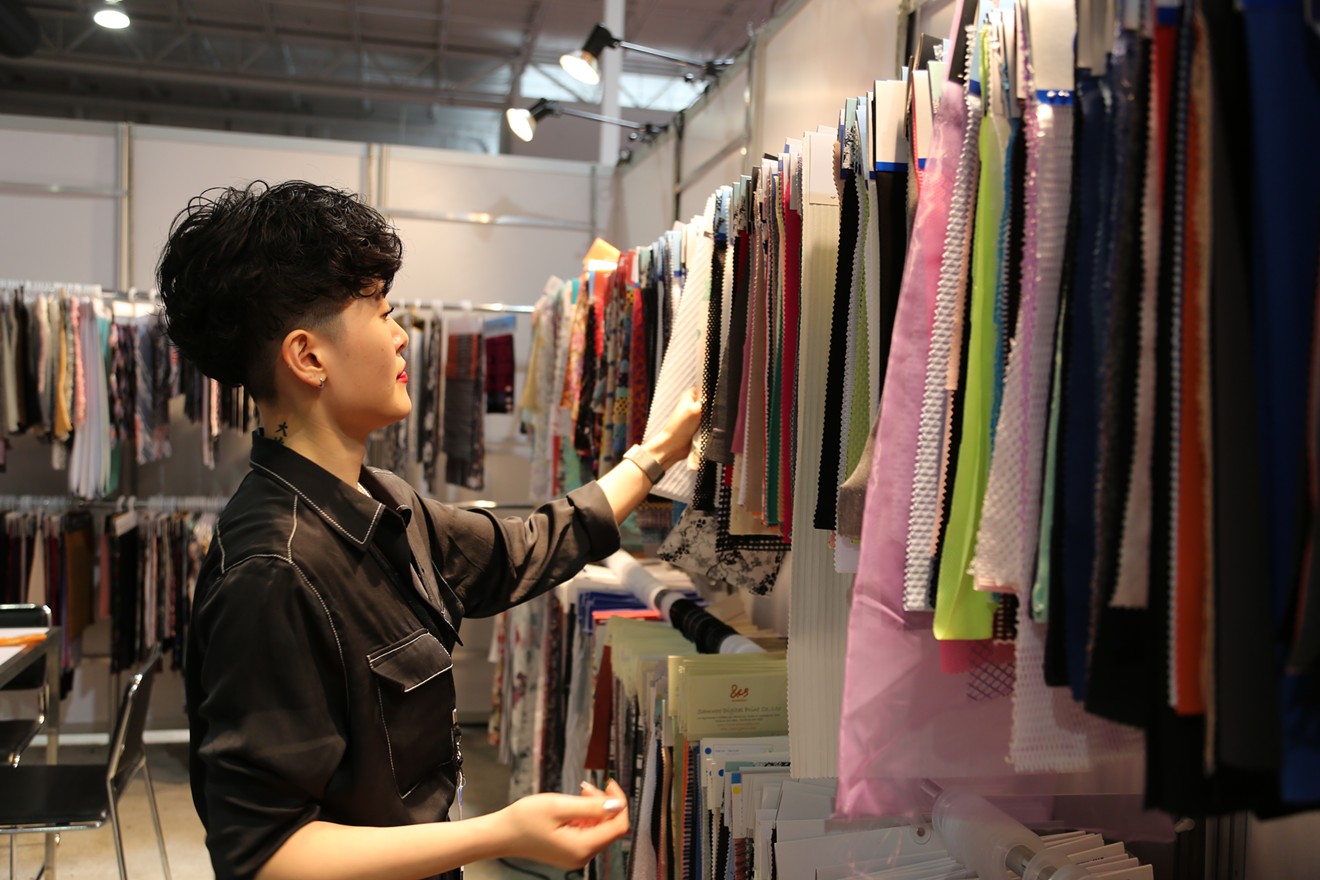 The trade-show floor was abuzz during Apparel Textile Sourcing Miami. Courtesy of Apparel Textile Sourcing Miami
Miami can quickly be written off as a town that's all hype and very little action. As local officials and business incubators attempt to brand the Magic City the next frontier for industries such as technology and fashion, critics argue this activity is nothing more than smoke. So who's right?

Miami's emergence as a global city is relatively nascent, and unlike cities such as New York and Los Angeles, upstart Miami entrepreneurs often find that the landscape is primed for innovation and distinction. The possibility of becoming a big fish in a small pond is a real likelihood in the 305, but would that success be sustainable enough to translate to a larger market? What does it truly take for an industry in Miami to be considered booming?

You might ask the organizers behind Miami Fashion Week (MIAFW), Miami Swim Week, or Apparel Textile Sourcing (ATS) whether they think Miami is poised to become a true fashion city. Though Swim Week has long attracted national and international designers and buyers, attention has remained on swimwear, and rarely do emerging ready-to-wear brands have a platform. In May, however, a flurry of activity swirled around fashion in Miami, which until last year was hardly a destination for designers and fashion buyers. The revival of Miami Fashion Week and the newly installed trade show Apparel Textile Sourcing drew swarms of national and international fashion-focused visitors to the city last month.

With the arrival of new educational programs, trade shows, runway events, and a general buzz around the fashion startup community, it's entirely possible Miami could emerge as a destination for fashion incubation, particularly for local and Latin American designers.

If an abundance of educational programs is any indication of an industry's promise, Miami can also count on these signals. Miami Dade College established its Fashion Institute in 2017. The same year, Italian fashion school Istituto Marangoni debuted in the Design District. Most notable, celebrity fashion designer Naeem Khan, who has long retained a residence in Miami, announced he would move his headquarters to Miami and establish a fashion program at Design and Architecture Senior High (DASH), one of the nation's more renowned art and design schools.

Determining whether Miami has a shot at becoming a fashion capital requires understanding how that ecosystem works. In more established cities such as New York and Los Angeles, young designers leave college and find themselves in an environment in which opportunity to gain experience in an established company or design their own garments is amply available. If a designer goes the company route, he or she gains hands-on experience in running a fashion brand. If a designer chooses to start his or her own line, a wealth of resources are available, including luxury fabric stores, seamstresses, manufacturers, trade-show events, and opportunities to present designs. Because these designers are already seated in major cities, access to retail buyers, boutiques, and investors is far easier than for designers based in Miami.

Simply put, Miami hasn't emerged as a fashion city because resources for production are scarce and gaining access to retail buyers located in New York and Los Angeles is substantially difficult. However, that might soon change if organizations such as ATS and MIAFW continue to invest in the region as a fashion up-and-comer, offering budding fashion graduates the infrastructure necessary to bring their brands to life.

For Jason Prescott, the founder of ATS Miami, the decision to launch a U.S. version of its successful Canadian textile trade show in Miami was simple. "There's a fast-growing retail sector, and there's huge migration going to Florida right now," he says. "Combined with the fact that it's a gateway to Latin America, how do you go wrong? We wanted to put our footprint there and bring infrastructure to Miami."

After announcing its launch in Miami, ATS sold out the trade show's booths and registered more than 3,000 attendees for the event. Most of the companies presenting their textiles and sourcing capabilities traveled from far-flung destinations such as Africa, China, and Pakistan, while buyers and designers on the floor were predominantly local or from Latin America.

The last day of the event, the showroom floor was still abuzz with excitement as attendees reported they had made substantial connections with local and international designers. Aside from writing orders for new apparel merchandise, Bennett Fruchter, a senior vice president at Shanghai Shenda Americas, noted ATS provided opportunities for new designers interested in launching their own endeavors. "A lot of local designers have come to the show to see how they can source and fund their own projects," Fruchter says. "They want to understand how they can make product. They're looking for textiles and production." Rene Ruiz walks the runway alongside a model sporting one of his resort-wear looks.
Courtesy of Miami Fashion Week
That's exactly why Liz Nieves, the founder of dance-wear brand Ilogear, decided to attend ATS Miami. Though she produces much of her line locally — she notes that manufacturing overseas would be much less expensive, but her business volume wouldn't meet the order minimums — Nieves thought the conference offered a ton of resources. "I found labels and tags for a much cheaper price. I also felt that by speaking with some of the companies, they were able to provide knowledge on things I will need as we scale and become larger as a brand," she says.

Growth is a marked challenge for fashion companies based outside of major fashion capitals, and a new Miami-based startup is hoping to bridge that gap for emerging designers. The founders of StitchLab hope to connect designers with local wholesale buyers, influencers, and consumers on their path to scaling, with a particular focus on Latin American designers. As the daughter of retail boutique owners, cofounder Karina Rosendo grew up around fashion. When she met Andrea Chediak at work at Univision, they decided to launch a talent incubator for up-and-coming fashion entrepreneurs. "We focus on choosing companies that are committed to sustainable fashion," Chediak says, "and we work together to curate participating designers."

Between an increase in educational programs, production and growth resources, Miami fashion entrepreneurs arguably have more support than ever. But what about sales? Theoretically, Miami Fashion Week was designed to fill this role by producing runway shows that attract buyers from major retail stores. Notably, MIAFW was listed on the Council of Fashion Designers of America's official calendar last year as a destination for resort-wear buyers. But MIAFW remains somewhat disconnected from the buying industry and more focused on creating content for Latin American audiences who want to feel like insiders in the Miami fashion scene. Nonetheless, creative director Lourdes Fernandez-Velasco says MIAFW understands that attracting buyers is an important component to their success.

"We are working with a company that has been securing buyers for the show this year, which is new," Fernandez-Velasco says. "Buyers are an important facet, but they also need a reason to come down here. Saks Fifth Avenue is our fashion authority partner, and we're looking to grow buyer attendance in the years to come."

It's clear Miami is creating its own fashion scene, but whether it will remain insulated is yet to be seen. Though emerging designers may flock to the city for education and business resources, what will allow a fashion business to blossom will ultimately depend upon its revenue. For now, it appears the buying industry needs to pay closer attention to Miami if it ever aims to call itself a true fashion city.
KEEP MIAMI NEW TIMES FREE... Since we started Miami New Times, it has been defined as the free, independent voice of Miami, and we'd like to keep it that way. With local media under siege, it's more important than ever for us to rally support behind funding our local journalism. You can help by participating in our "I Support" program, allowing us to keep offering readers access to our incisive coverage of local news, food and culture with no paywalls.
Make a one-time donation today for as little as $1.
Nicole Martinez
Contact: Nicole Martinez