Noémie Merlant in Jumbo Photo courtesy of Dark Star Pictures
If you’ve been missing South Florida cinemas and festivals, this weekend may just be the ultimate smorgasbord for any cinephile in the city looking for a treat. The Miami Film Festival's Gems series and Popcorn Frights’ nationwide collaborative festival, Nightstream, are here to provide a wealth of films to stream from your very home.

With dozens of films, panels, conversations, and more to choose from, it isn’t an easy endeavor for anyone who wants to dive into what both festivals have to offer. Gems has works like Shiva Baby, The Sound of Metal, and Night of the Kings, while Nightstream offers everything from Justin Benson and Aaron Moorhead’s Home Movies to features like Frank & Zed, My Heart Can’t Beat Unless You Tell It To, and Honeydew.

The list of films may seem endless, but film fans can relax and take the opportunity to read through some of what we’ve seen here at New Times and hopefully make their own decisions on what kind of wild film festival they’d like to have by combining tickets from the two. 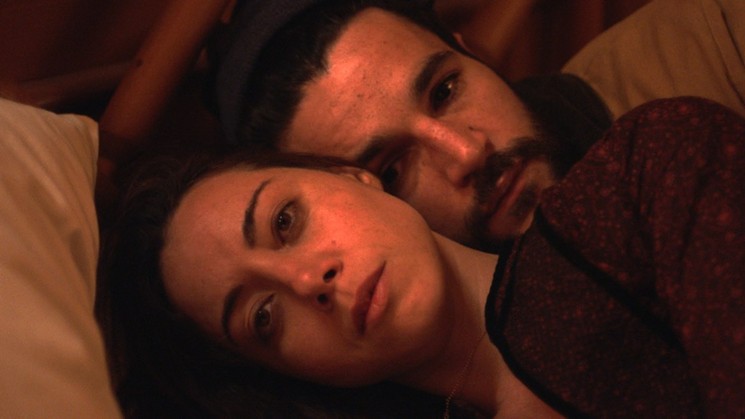 Those fond of Aubrey Plaza’s ability to stretch beyond comedy and into darker territory (as she has done brilliantly in FX’s Legion, among other works) should seek out Lawrence Michael Levine’s Black Bear immediately. The film, which follows a female filmmaker at a creative impasse heading to a rural retreat to write and relax, is an intriguing little work, split into two chapters that feel like mirror images of each other in the best way. Plaza joins Christopher Abbott and Sarah Gadon in an exquisite trio of performances, shifting roles between each half in a way that defies easy description without spoiling.

In a way, Black Bear exists as both a thriller and a dark comedy, as a piece of fiction as well as its own metafiction, analyzing the story it’s telling, and the way filmmakers and actors engage in storytelling. It is playful in how it approaches these things, and Levine seems to draw much pleasure from exploring the toxicity of relationships, both personal and creative, and how it distinctly impacts the mental state of all those involved. While the investigation itself may be the slightest bit shallow and could arguably use an extension to further dive into its characters' psyche, the ride that the film provides is otherwise delightful. Juan Antonio Barquin Pablo Larraín’s Ema is the most unhinged piece of bisexual cinema since Paul Verhoeven’s Basic Instinct. Hyperbolic as that statement may sound, the two films share more in common than one might expect, including a penchant for indulging in pulp while critiquing societal standards and the placement of a sociopathic queer blonde at the film's core.

Ema’s opening act is designed to disorient by offering glimpses into a woman's life the audience doesn't understand. Fights between dancer Ema (Mariana Di Girolamo) and choreographer Gastón (Gael García Bernal) are purposely obscured, emphasizing the relationship's toxicity through references to their adopted child, the fire he started, and who's to blame. The perverse way the two lob insults at each other is reminiscent of the vitriolic onslaught shared between George and Martha in Who’s Afraid of Virginia Woolf? The exchanges are as brutal as they are hilarious.

Larraín’s brand of filmmaking is also in tune with Verhoven’s — each can elevate material that might seem trashy at first (Guillermo Calderón and Alejandro Moreno’s delicious script wades dangerously close into depraved bisexual tropes) into something far more introspective and critical of the status quo than one would expect. Di Girolamo brings to Ema the same energy Sharon Stone brought to Basic Instinct's Catherine Trammell — sexy, calculating, and unpredictable. She’s a woman constantly in motion, and cinematographer Sergio Armstrong’s gaze approaches her body as though it’s torn between forces that she has no command over, even as her eyes indicate otherwise. 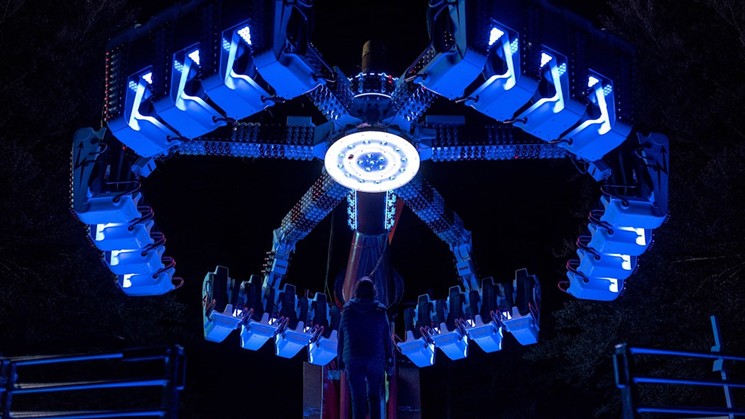 Jumbo soars when it invests in the sentient sensuality and electric eroticism of the sexual connection between Jeanne and Jumbo, where metal and flesh converge, and Jeanne experiences the total abandonment one experiences on such a ride. Though the film’s middle section and conclusion struggle to find themselves tonally, the style and performances by Merlant, last seen in the excellent Portrait of a Lady on Fire, and the scene-stealing stalwart Emmanuelle Bercot, as Jeanne’s wonderfully tacky mother Margarette, make Jumbo a pleasant ride. Wittock establishes herself as a filmmaker to watch, and while it doesn’t always fire on all cylinders, Jumbo is definitely worth a (tilt-a-)whirl. Trae DeLellis

Lapsis, the debut feature by Noah Hutton, is a sci-fi satire that mines the horrors of modern capitalism and corporate culture. It’s a clever takedown of our current gruesome gig economy as well as a rebuke of an economic system stacked against the working class. In short, it is a perfect cinematic entry for the year 2020 that should become required viewing in high school econ classrooms.

A new technology, Quantum (think something like 5G), has taken over the world, causing equal parts excitement and anxiety. To maintain and grow the Quantum network, a faceless corporation is beholden to “cablers,” independent contractors who hike through the forest connecting cables between power sources. Ray (Dean Imperial) decides to earn some quick cash to help his brother who suffers from a new disease, Omnia (akin to Epstein-Barr), desperate for the best treatment available, which allows the film to skewer the American healthcare system/scam as well. But in the woods he works, he encounters a mysterious and dangerous corporate society, fueled by exploitative labor, automated surveillance, and a cutthroat competitive marketplace.

Lapsis plays much like a top-notch episode of The Twilight Zone or Black Mirror with a self-assured tone and distinct point of view. Hutton has crafted an incredibly timely film to our current cultural zeitgeist while mining the classic trope of man versus machine. It also doubles as a great takedown of companies like Amazon or Uber, reflecting current court cases regarding their “independent” contractor system, while exposing the rot within capitalism. In the film, an app (think the perky cousin of Hal 9000) pesters workers to “challenge the status quo,” and Lapsis practices what it preaches in this highly amusing and thoughtful walk through the woods. Trae DeLellis One of the best parts of the Miami Film Festival’s pared-down fall offering is the opportunity to find a smaller film that could be lost in a larger festival — and this is the case for the wonderful My Prince Edward. The first feature film by Norris Wong has that rare feeling of being deeply personal while expansively universal simultaneously, following Fong (adeptly played by Stephy Tang), an adrift woman working at a one-stop wedding shop in Hong Kong. She is feeling the societal pressure, but none of the desire to be married to her long-term boyfriend, Edward, and passively accepts his proposal when it comes. But before she can get hitched, there is one major hitch: a previous “sham” marriage that she entered in her youth for some quick cash.

Despite seeming heavily plotted, these events don’t detract from the film, which won best new director at the Hong Kong Film Awards and heralds the arrival of a sensational new filmmaker. My Prince Edward is a poignant and wry look at the marital-industrial complex through the prism of a late-in-life, coming-of-age tale and could easily be marketed as an heir apparent to a film like The Farewell, with one easily imagining some studio might want it for an American remake of the film sooner rather than later.

Wong’s film plays like a slightly subversive and smarter take on the romantic comedy, with its best moments involving the minutiae of long term relationships, like the particular emphasis on something as mundane as a pair of nail clippers. It is a subtle but wonderfully thought out and intelligent film about its exploration of marriage, freedom, and self-discovery. By asking what any modern rom-com should, questioning the institution of marriage, and emphasizing the importance of self-hood before coupling, My Prince Edward makes a terrific film to watch either with a significant other or by yourself. Trae DeLellis Undine, the latest from Christian Petzold, is a tremendous romance from one of contemporary cinema’s greatest and most underrated filmmakers. Despite his last film, Transit, being directly adapted from the novel that has served as his inspiration for much of his oeuvre, Undine feels as fresh as it does familiar for the filmmaker.

Petzold unites with his stars from Transit, the superb Franz Rogowski and Paula Beer (the latter of which won the Best Actress prize at the Berlin Film Festival) to dive into an altogether different tale of two souls crossing paths. In Undine, Petzold turns to the titular mythological character — think a water nymph or Hans Christian Andersen’s The Little Mermaid more than Disney’s version — who becomes human when she falls in love but is doomed to die if he is unfaithful to her. But instead of focusing on this aspect of the myth, Petzold is more preoccupied with the nuances of falling in love and building oneself back up after a relationship.

This notion of rebuilding and reflecting on our damaged histories comes into play beautifully with Undine’s dual role as a mythological creature and lecturer on Berlin’s history and architecture, offering an especially poetic way to look at the film’s themes and the complex life of the central figure. Undine is as much a continuation as it is a departure from the Berlin School, Germany’s film movement known for social realism and a focus on interpersonal relationships, by injecting German romanticism and magical realism for an intoxicating and refreshing piece of romantic melodrama. Juan Antonio Barquin and Trae DeLellis

Saturday, October 10, through Sunday, October 11, via Gems. Tickets are $9.99.
KEEP MIAMI NEW TIMES FREE... Since we started Miami New Times, it has been defined as the free, independent voice of Miami, and we'd like to keep it that way. With local media under siege, it's more important than ever for us to rally support behind funding our local journalism. You can help by participating in our "I Support" program, allowing us to keep offering readers access to our incisive coverage of local news, food and culture with no paywalls.
Make a one-time donation today for as little as $1.