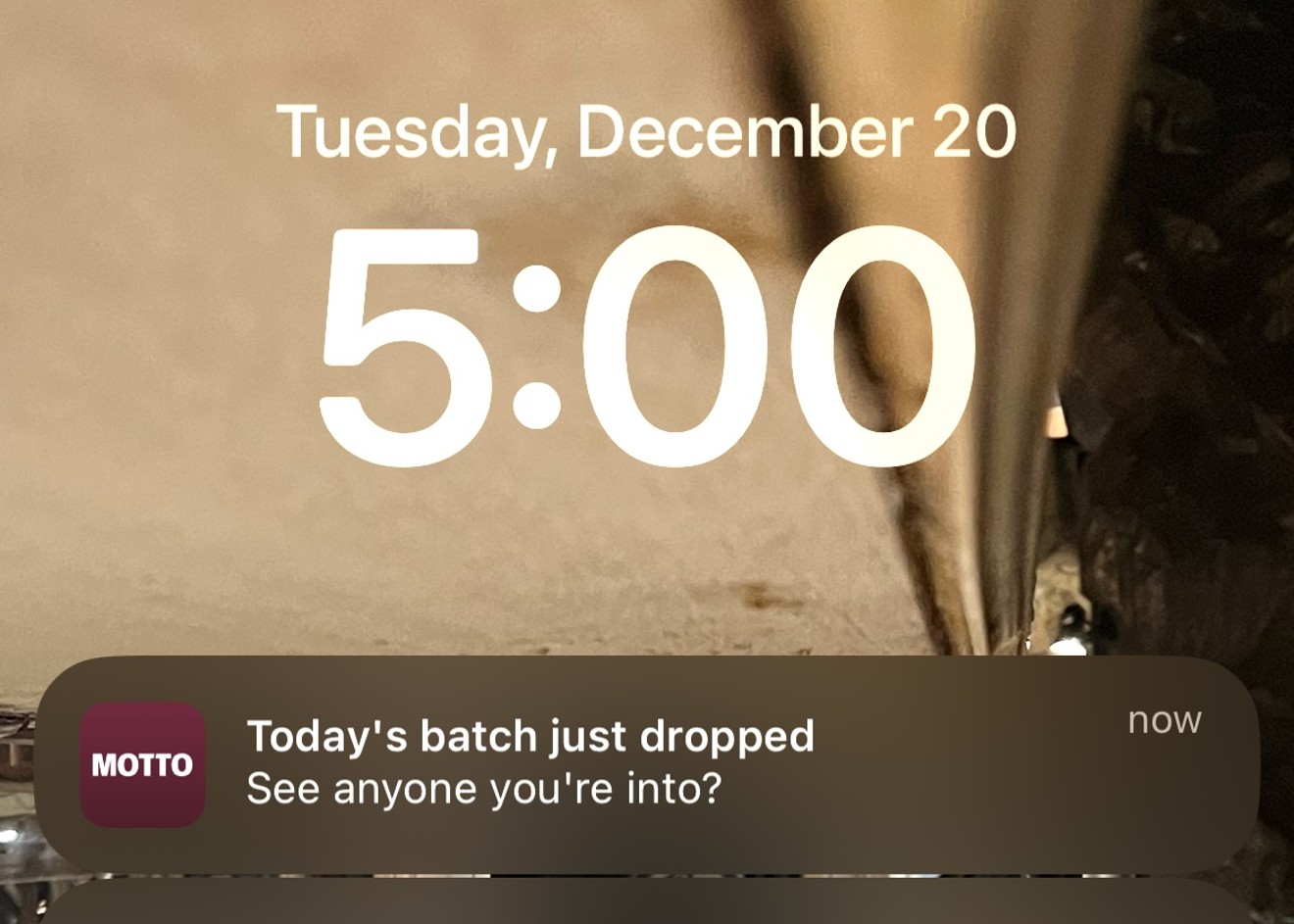 Motto alerts users at 5 p.m. daily with a new batch of profiles. Screenshot provided by Motto
Ever find yourself aimlessly scrolling for the perfect match? Tired of the orthodox DTF (down to fuck) message sent from anonymous profiles? Scroll no more.

Joel Simkhai, founder of the gay hookup app Grindr, and Alex Hostetler have launched a new queer dating app, Motto, which aims to improve the process of dating and hookup culture.

"Our goal is to make Motto the best app for people who are looking for a more guided sort of premium or elevated experience, something that feels more cognizant of how people interact with each other," says Simkhai. "The process feels more open and humane."

Motto first launched in February with Miami as its first city, followed by New York City. However, a recent update in September changed the matchmaking experience entirely. Users are only able to view five to ten profiles per day in an effort to cut down screen time. The queue repopulates at 5 p.m. daily with a different batch of possible matches.

During Simkhai's time as CEO of Grindr from 2009 to 2018, he found users would spend almost a month's time every year actively scrolling on Grindr.

"I probably spent a year of my life, or some ridiculous amount over the last 13 years, on Grindr," he tells New Times. "It's embarrassing sometimes. I'd get sucked into these vortexes of time, and then you think, what's the return on all this, and what did I get out of it?"

By contrast, Simkhai and Hostetler hope users will spend just a few minutes a day on Motto.

"We're tired of this endless scrolling where you're constantly looking to see who else is popping up," Simkhai says. "With Grindr, I think we made it a lot easier to date, but it was a manhunt just to meet someone online. It was really archaic."

He encourages users to plan more time together in real life than on searches from behind a screen.

The app is somewhat exclusive in that Simkhai and Hostetler manually verify each profile before users can start to match. Users are required to include their name, neighborhood, and at least three photos that show their face. Another way is to receive a referral code from an existing user. For now, the app only verifies accounts made in Miami-Dade and NYC, though there are plans to expand.

Once approved, users can personalize their bios based on height, weight, ethnicity, smoking habits, preferred sex position, date of birth, pronouns, and gender. Pronoun options are he/him, she/her, they/them, "prefer not to say," and a blank space to write in. For now, gender options are limited to man, trans man, woman, trans woman, and nonbinary.

"The majority of our users are cisgender gay men, but we do have trans and nonbinary people. We're thrilled to have them, and we'd love to have more," Hostetler explains. "We're going to roll out more features to help people with different gender identities find one another very soon."

Users can also list their health statuses and test dates for HIV, STIs, COVID-19, and monkeypox.

New Times asked for Motto's current user count, but the founders declined to share, noting that the app is still in its early stages.

The ad-free app has hosted dozens of events in Miami this year as one of its primary methods of getting the word out, along with social media.

"It's a bit of a risky business decision, but we think it's worth the mental health of our users," Simkhai says. "Other apps with an ad-driven model want users to constantly spend time seeing those ads."

As for the name, Motto draws on the notion that every person has a unique approach to identifying themself — like a motto, Simkhai explains.

"Motto is this very individualized statement that someone can own and really define," he says. "There are so many different ways to go about hooking up, intimacy, dating, and even how you talk."

"We didn't want to have a hypermasculine name," Hostetler says. "We were really conscious of keeping the gender expression of our name sort of neutral."

Ultimately, Simkhai and Hostetler say, their mission is not to replace Grindr or eliminate hookups. The key distinction lies in how users go about the search.

"We think Grindr is a super-effective and useful tool, and I don't think that's going to change," Hostetler adds. "We are just trying to create something that gives people a sort of different value system."

To download the app, visit findmotto.com.
KEEP MIAMI NEW TIMES FREE... Since we started Miami New Times, it has been defined as the free, independent voice of Miami, and we'd like to keep it that way. With local media under siege, it's more important than ever for us to rally support behind funding our local journalism. You can help by participating in our "I Support" program, allowing us to keep offering readers access to our incisive coverage of local news, food and culture with no paywalls.
Make a one-time donation today for as little as $1.