In Aesthetics of Excess, Miami Author Explores Chonga Culture and Its Appropriation 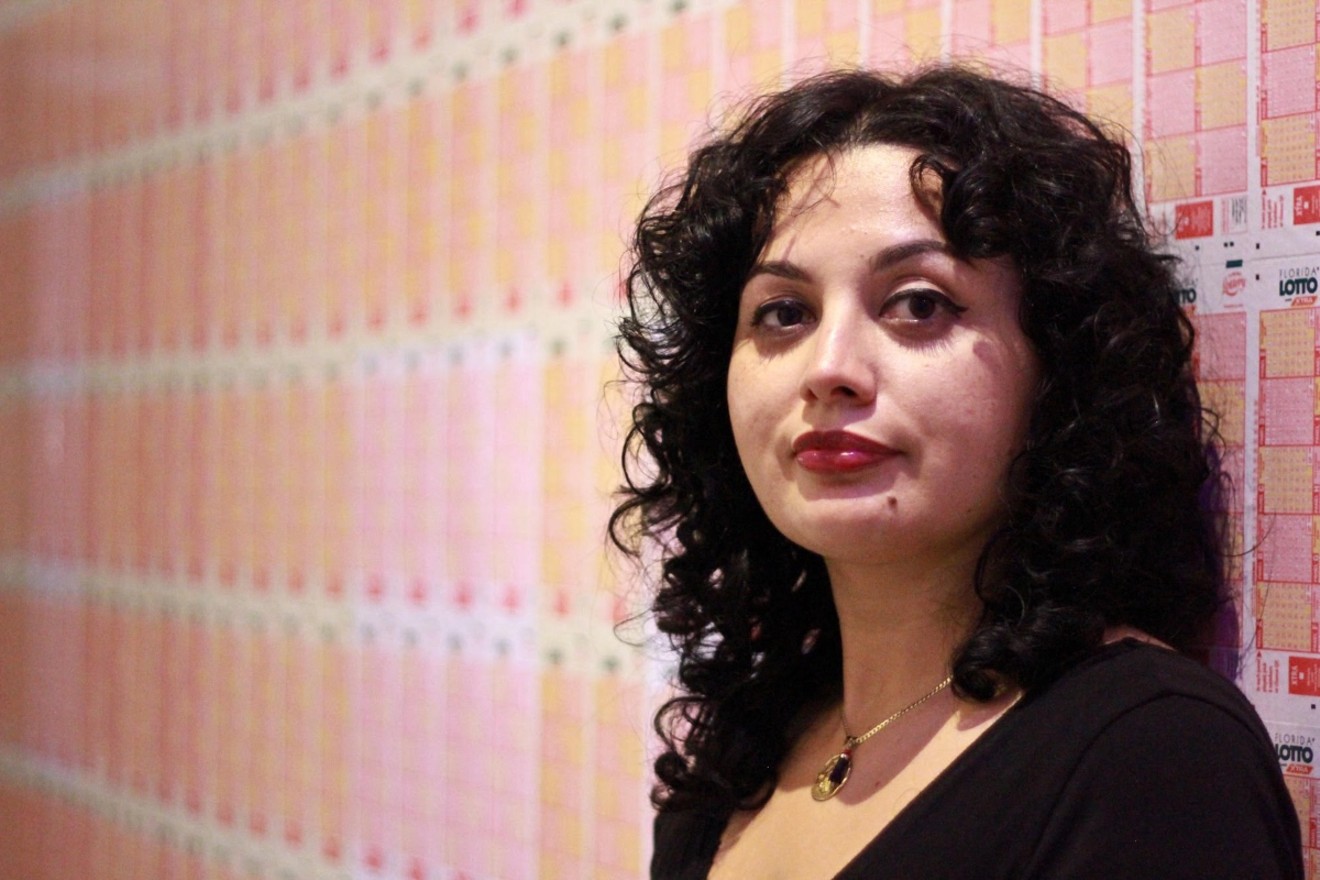 "There was just something really powerful for me in that image," Hernandez says. "It was very much this moment of bringing the chonga into the sphere of Miami popular culture, but very clearly through a kind of parody. It wasn't necessarily mean-spirited. But it wasn't taking chongas seriously as cultural innovators."

In Hernandez's Aesthetics of Excess, published in November, the University of Florida professor explores the ways the bodies of working-class Black and Latina women and girls are racialized and labeled as excessive — while serving as a source of cultural capital when they're subsequently appropriated by the contemporary art scene. A part of that exploration was through chonga girls, a term thought to have been coined in Miami.

Throughout her book, Hernandez draws on her community arts work with Black and Latina girls in North Miami, where she first began to see the dynamic at play.

"When Miami girls end up on the cover of something, when they are put in art museums, when they appear in these areas of culture that matter — why are they always a joke?" Hernandez says. "Why is that the only way that we can appreciate and celebrate Latina girlhood?" The New Times cover served as an entry point to ask those questions.

Born and raised in New Jersey, Hernandez moved to Miami during middle school and stayed to pursue her bachelor's degree at Florida International University. She worked for years at Women on the Rise! — an arts program she established in partnership with the Museum of Contemporary Art North Miami for working-class women of color aged 12 to 21. She returned to New Jersey to pursue her Ph.D. at Rutgers University and is now an assistant professor at the Center for Gender, Sexualities, and Women's Studies Research at UF.

"When Miami girls end up on the cover of something, why are they always a joke?"

A city already known for its extravagance and sexually charged fashion, Miami was a unique place to examine that dynamic. In a way, Aesthetics of Excess is an opportunity for South Florida to reckon with its history of racializing its women of color for adopting now-popular styles.

"That perception is only bad or negative when the person engaging in that perception sees something wrong with the person they're looking at," she elaborates. "I'm actually interested in embracing sexual aesthetic excess."

In her work, Hernandez looks at how those aesthetics can serve as a point of empowerment for Black and Latina working-class women. She too adopted chonga sensibilities, noting that they're rooted in her culture. "If our life isn't off the chain, at least our bodies can be," she writes, remembering how her grandmother would doll herself up before heading to work at a sweatshop. 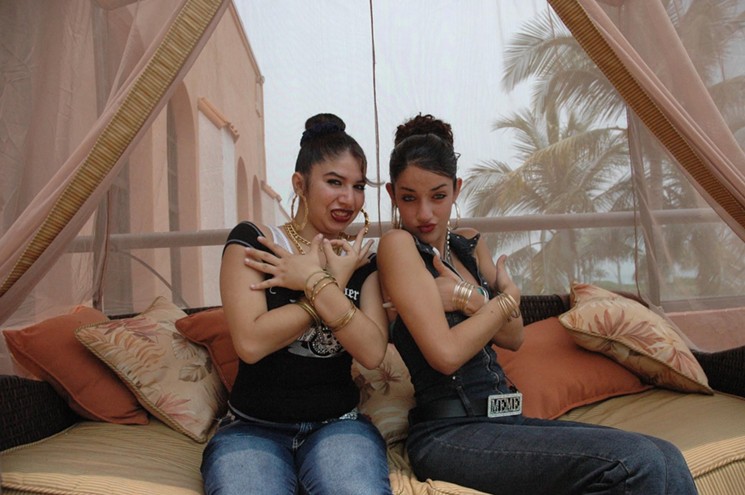 A photo of "Chongalicious" ladies Laura Di Lorenzo (left) and Mimi Davila from New Times' 2007 story.
Photo by Ivylise Simones
"It's about a particular kind of pride," Hernandez goes on. "And it's not just about making other people respect them — I think that's part of it. But it's also an intrinsic cultural practice that sees the adornment of the body as something that is an artistic endeavor, even if our moms and grandmas never thought of themselves as creative or as artists."

Working-class Black and Latina women who practice that style in their daily lives attract so much attention, she argues, not just because the styles they embrace are eye-catching but also because they make class visible in society. The styles parodied in the "Chongalicious" video remind bystanders of urban spaces that are poor and working-class.

"Those are the spaces that need to be rejected or expelled from within communities of color in order for them to be included," Hernandez says. "You have to reject the chonga because the chonga was like the working-class version of yourself. So for me, like, the chonga is both vilified and celebrated because of the way class is obvious in her body. And we're not comfortable with that in a U.S. context because we don't really talk about class. We pretend that that doesn't even exist."

It's not, after all, the actual fashion of chongas and working-class Black and Latina women that's racialized. A look at the latest fashion trends will turn up white women celebrated for thick gold chains, overdrawn lips, and gelled-down ponytails. Working-class aesthetics of excess permeate contemporary art and popular culture.

Those women are trendsetters. It's only when Black and Latina women's bodies are present that the trends are racialized or considered "extra" or laughable.

"If life is hard, as it is for many working-class Black and Latina girls, if we can take pleasure in putting ourselves together, then that is sacred," Hernandez argues.

Women on the Rise! is defunct after having been caught up in legal battles between the Museum of Contemporary Art and the Institute of Contemporary Art in 2014. Hernandez is hopeful that she and past instructors can revive the community work independently, outside of the traditional museum space, which she says undervalued the girls and their work.

To this day, Hernandez grapples with her own deep-rooted desires to reject the chonga elements of her identity. When she was working with young girls in North Miami, one student commented that she looked like a Bratz doll, referring to the fad toy that was famous for its bedroom eyes and plump, glossy lips. At first, her reaction was flippant, questioning whether she actually looked like that.

"I really had a process within myself saying, 'I know it's problematic to feel like I need to reject that,'" Hernandez muses. "Then what does that mean about the girls that I work with? Who dress that way, who love Bratz dolls? I myself was doing some of that work of rejecting the working class and rejecting that sexual identity."

Now, as she weaves in and out of academic and art spaces, Hernandez tries to embrace the aesthetic of excess by dressing the way she normally would — bright red lips, high heels, and all.

After all, she says, "It's valid for us as Latinos to show up in these different spaces as ourselves."

Aesthetics of Excess: The Art and Politics of Black and Latina Embodiment. By Jillian Hernandez. Duke University Press. 2020. 320 pages. Paperback $27.95.
KEEP MIAMI NEW TIMES FREE... Since we started Miami New Times, it has been defined as the free, independent voice of Miami, and we'd like to keep it that way. With local media under siege, it's more important than ever for us to rally support behind funding our local journalism. You can help by participating in our "I Support" program, allowing us to keep offering readers access to our incisive coverage of local news, food and culture with no paywalls.
Make a one-time donation today for as little as $1.