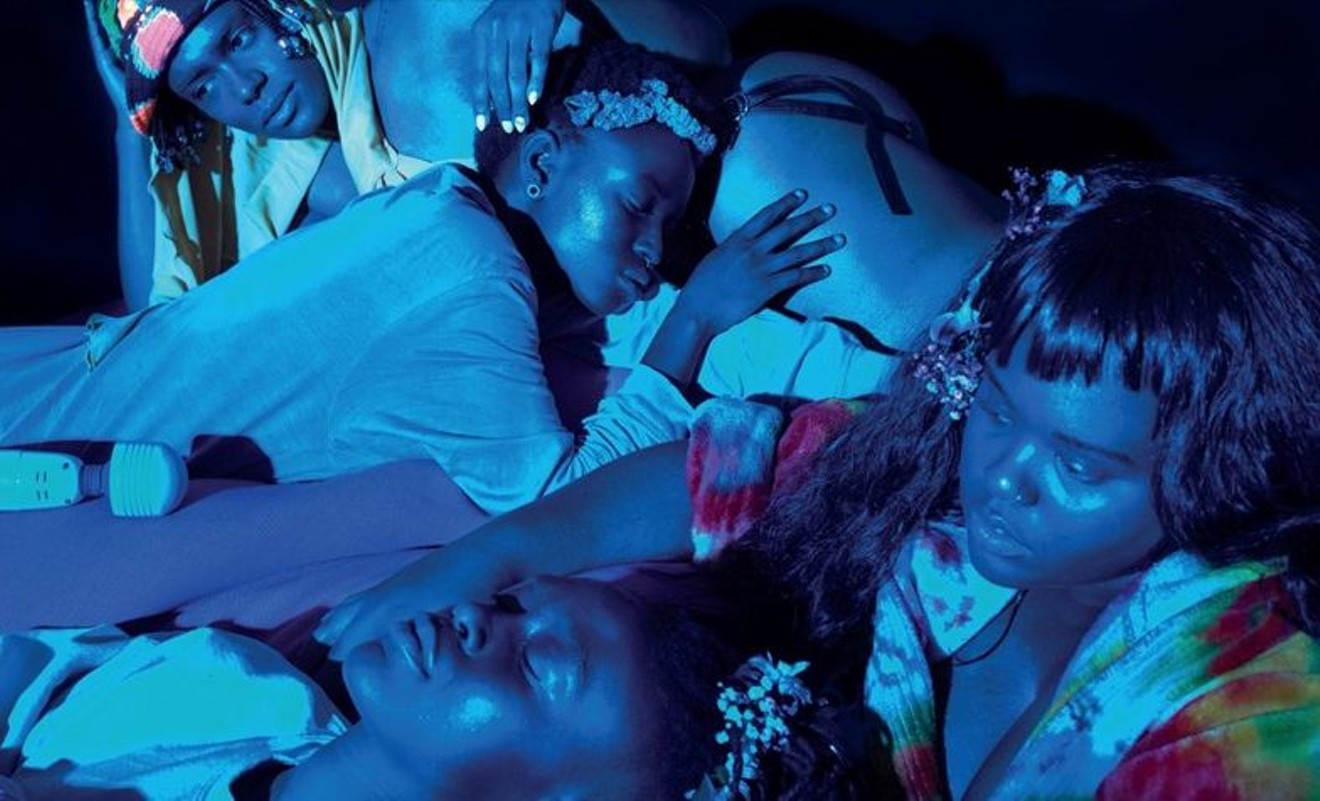 A restful art installation at MDC's Museum of Art and Design. Courtesy of Navild Acosta and Fannie Sosa
Artists Navild Acosta and Fannie Sosa say they conceived their installation, Black Power Naps/Siestas Negras, as a space for self-care, a dream world where black and brown bodies are invited to relax. The goal? To provide rest as a means of reparations.

Black Power Naps/Siestas Negras, which is set to open Thursday, October 24, at Miami Dade College's Museum of Art and Design, comprises a multisensory, interactive area designed to provide joyful and relaxing repose from fatiguing systems of inequality. In addition, the artists will host guided nap meditations, live DJ soundscapes, and Platonic Play Party, a workshop that will explore platonic intimacy.

Acosta, a Berlin-based dancer and choreographer; and Sosa, a multimedia artist who splits time between Europe and South America, say the project forced each of them to confront their relationships with rest and sleep.

"The sleep part is still a struggle personally, but now I understand so much more when it comes to my levels of exhaustion, energy, and my boundaries — I feel a bit of healing has happened," Acosta offers. "Logically, I know now what can happen when I'm tired, but it's something my body needs to catch up with. I still feel a level of guilt when I'm in that subliminal stage that's conscious and unconscious."

With Black Power Naps/Siestas Negras, the duo aims to alter the view of sleep as a sterile state. To that end, the setup includes a lounge with a variety of embellished beds, gauzy canopies, serene lighting, therapeutic sound vibrations, and other restorative props.

"Very early on, we were really reflecting on not only how sleep is structurally less easy to access for POC folx, but the visual world of sleep and rest is very sterile-looking, very white, with white sheets, and it has to be clean. There's this glorification of whiteness in the place of sleep," Sosa says. "We decided to have a very deliberate direction with visuals to make sure everything is saturated with color, as a way to resist this clinical understanding of what it is to relax and take space. There is so much behind the fact that a black person in public, resting, is seen as loitering, messy, and criminal. That's why we wanted to work with surfaces that had color."

To accompany the exhibit, the artists are working on a line of fragrances and loungewear, an app, and a magazine that documents each city the project visits. A retreat is in the works, and Sosa and Acosta are seeking support to bring Black Power Naps/Siestas Negras to communities in the United States and abroad where reparations are needed most.

"This installation is a launching platform where we're confronting something that is very simple but very true and strong," Acosta says.

Black Power Naps/Siestas Negras. Thursday, October 24, through January 12, 2020, at the Museum of Art and Design at MDC, 600 Biscayne Blvd., Miami; 305-237-7700; mdcmoad.org. Tickets cost $5 to $12; admission is free for MOAD members; MDC students, faculty, and staff; and children 12 and under. RSVP to the October 24 opening via eventbrite.com.
KEEP MIAMI NEW TIMES FREE... Since we started Miami New Times, it has been defined as the free, independent voice of Miami, and we'd like to keep it that way. With local media under siege, it's more important than ever for us to rally support behind funding our local journalism. You can help by participating in our "I Support" program, allowing us to keep offering readers access to our incisive coverage of local news, food and culture with no paywalls.
Make a one-time donation today for as little as $1.