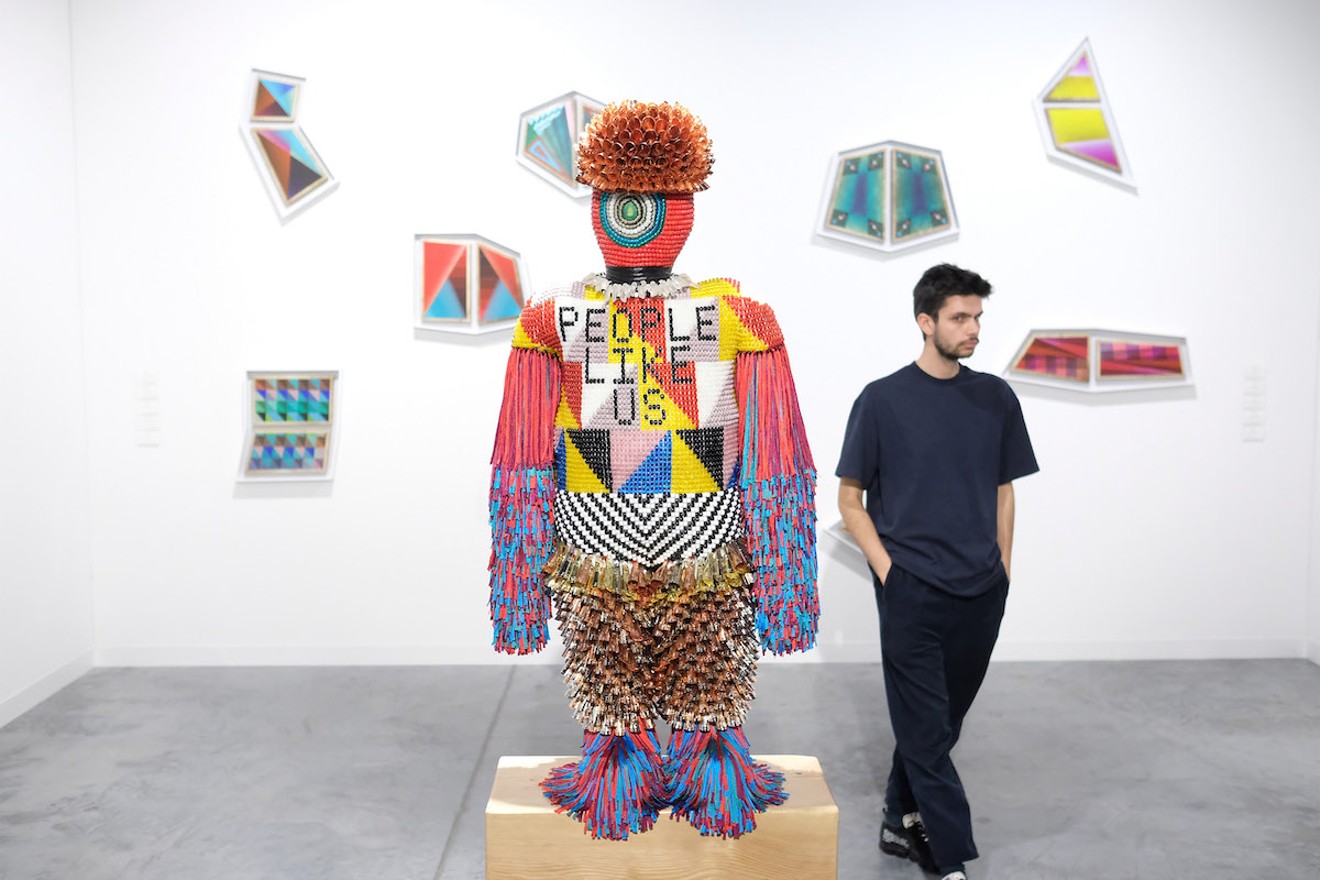 Get ready for another dizzying number of fairs during Miami Art Week. Photo by Nicholas Hunt / Getty Images
Every December, Art Basel's grand arrival in Miami Beach kicks off a week of satellite art shows, museum exhibits, and gallery events that complement the world-renowned art fair's collection of work. Sometimes the best events aren't part of Basel proper, and that's really what Miami Art Week is all about: showcasing the Magic City's status as an international art hub as opposed to simply being a host for the main event. This year's lineup of satellite art fairs has something for everyone, and each tells a distinct story about different parts of Miami's expansive art world.

Miami is ready for Art Basel 2019.
Photo by Daniella Mía

South Beach is the epicenter of Miami Art Week, but many excellent fairs will happen on the mainland. The long-running Art Miami is celebrating its 30th anniversary this year — making it almost twice the age of Art Basel Miami Beach — and its long list of galleries and artists exhibiting their work make it a must-stop for any art connoisseur. The Waltman Ortega and Rosenfeld galleries — the show’s only two exhibitors with Miami outposts — will present the work of artists such as Yayoi Kusama and Alain Le Boucher. The Art Miami pavilion will be open to the public Wednesday, December 4, through Sunday, December 8, and tickets (which include admission to the adjacent sister fair Context) start at $35. Wednesday, December 4, through Sunday, December 8, at 1 Herald Plaza at NE 14th Street, Miami; artmiami.com. Tickets cost $35 to $275 and include admission to Context.

Among Miami Beach’s best Basel attractions is Aqua Art Miami. It always reserves space for Miami-based galleries and artists, and this year, eight of the fair’s 60-plus booths will represent the Magic City through the work of artists such as Nigeria’s Abiola Akintola and graphic designer/provocateur Andy Hirst. Thursday, December 5, through Sunday, December 8, at Aqua Hotel, 1530 Collins Ave., Miami Beach; aquaartmiami.com. Tickets cost $20 to $100.

Art Miami’s adjacent, concurrent offshoot, Context, recruits galleries from around the world to exhibit the work of young contemporary artists who are making waves in their respective areas. Marcel Katz Art — better known as the Art Plug — will display works by resident artists at Context as well as at Art Plug Power House, which will transform the Little Haiti food hall the Citadel into an art, music, and performance extravaganza. Wednesday, December 4, through Sunday, December 8, at 1 Herald Plaza at NE 14th Street, Miami; contextartmiami.com. Tickets cost $35 to $275.
click to enlarge

In a colossal tent across from the convention center, Design Miami will hold its 14th-annual edition. As opposed to Basel, which generally displays art created for art's sake, Design Miami — as its name implies — aims to draw attention to creatives worldwide who have a keen eye (and hand) for design in every aspect of life. Sure-to-be highlights are Paris' Galerie Philippe Gravier, which will show its Small Nomad Houses concept of easily assembled tiny homes created by world-famous architects; Belgian gallery Pierre Marie Giraud's sleek and sexy home decor pieces; and the Future Perfect, a U.S.-based platform presenting burgeoning contemporary artists such as Matthew Day Jackson and Floris Wubben. Wednesday, December 4, through Sunday, December 8, at Convention Center Drive between 18th and 19th Streets, Miami Beach; designmiami.com. Tickets cost $27 to $225.

Lucky Competitive Cats by Nobutaka Aozaki will be one of the pieces on display at NADA Miami.
Courtesy of Cultural Counsel

The 17th edition of NADA Miami is set to land at Ice Palace Studios in downtown. The fair promises to be another successful one for the New Art Dealers Alliance as artists from around the world will see their work displayed. Galleries from Europe, South America, and Asia will bring pieces by their up-and-coming talent. Miami’s sole representation will be the gallery Nina Johnson. Thursday, December 5, through Sunday, December 8, at Ice Palace Studios, 1400 N. Miami Ave., Miami; newartdealers.org. Tickets cost $10 to $40.

Prizm will return for its seventh iteration to show the work of contemporary artists from Africa and the diaspora. The fair is unique among its Miami Art Week contemporaries in that it doesn’t simply display works: It's also multidisciplinary, offering films and performances alongside educational panels that showcase the work and knowledge of the creatives featured. Admission is free and open to the public Wednesday, December 4; after that, one-day tickets start at $15. Wednesday, December 4, through Sunday, December 8, at the Alfred I. duPont Building, 169 E. Flagler St., Miami; prizmartfair.com. Tickets cost $15 to $200.

North of Art Basel, Pulse will celebrate its 15th anniversary by continuing its tradition of presenting work by contemporary artists whose pieces grace galleries around the world. This year, Pulse aims to be “the calm in the palms” during the hubbub of Miami Art Week by providing a more laid-back atmosphere to unwind by the ocean and absorb some of the artwork on display. Representing the 305 this year, Dina Mitrani Gallery and Momentum Fine Art will boast specially curated collections of fine-art photography. Thursday, December 5, through Sunday, December 8, in Indian Beach Park, 4601 Collins Ave., Miami Beach; pulseartfair.com. Tickets cost $35 to $100 via eventbrite.com.

Superfine! won't return to Miami this year, so Satellite will go it alone as the sole quirky art fair. New Times named it Best Art Fair in this year's "Best of Miami" issue, and it's not hard to see why. The fair demolishes the art-fair model and humanizes it into something more thought-provoking and approachable. This year, expect 30 exhibitors from across the globe, including a commissioned mural and projection experience by Nice'n Easy, live installation building by Tom Franco, a Chicano tattoo parlor by Jon Gomez, and a virtual-reality salon by Gabos Studios. Wednesday, December 4, through Sunday, December 8, at 2210 N. Miami Ct., Miami; satellite-show.com. Tickets cost $15 to $20 via eventbrite.com.

The Miami Beach-based fair will return for its 19th edition with a whopping 134 exhibitors. New to Scope's oceanside pavilion is Oasis, which will present daily programming featuring large-scale installations, must-see performances, and panel discussions, along with a focus on wellness. Also expect Focus | Art Chine — the fair's showcase of Chinese contemporary art — which promises cutting-edge, museum-quality work from established and emerging artists. Wednesday, December 4, through Sunday, December 8, on the beach at Eighth Street, Miami Beach; scope-art.com. Tickets cost $30 to $200. 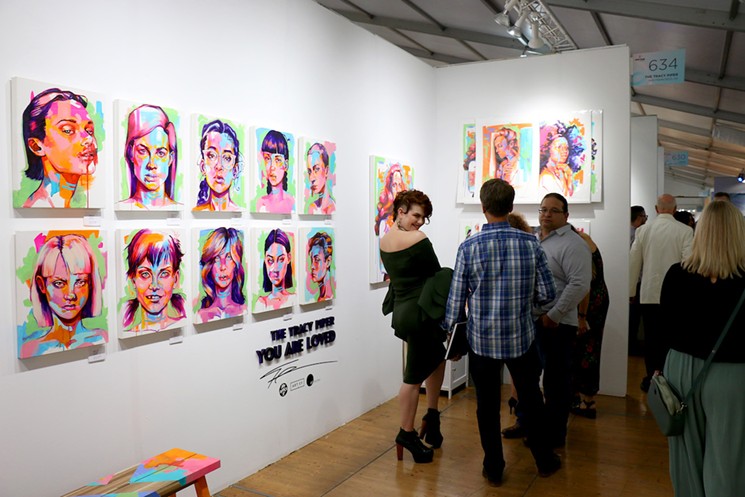 As Wynwood continues to explode into the art hub that developers envisioned it to be, increasing numbers of art fairs seek to take advantage of Miami Art Week’s timing and the neighborhood's location to bring Basel-level art to many Miamians’ backyard. Spectrum and Red Dot will return to Mana Wynwood to present a larger-than-ever lineup of local galleries and artists. Don't miss the Atelier Without Borders booth. Thursday, December 5, through Sunday, December 8, at 2217 NW Fifth Ave., Miami; reddotmiami.com; spectrum-miami.com. Tickets cost $10 to $85; admission is free to kids 15 and under. 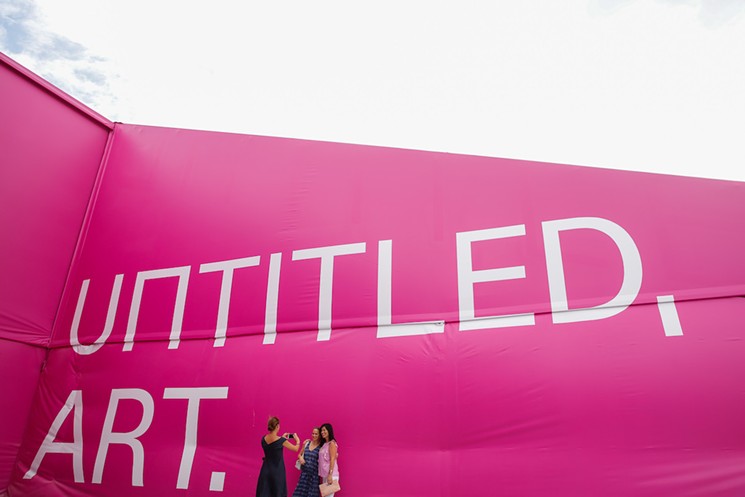 The immaculately curated Untitled will erect its massive tent on the sand at 12th Street in South Beach. The fair will ship in artists’ work from galleries across several continents, and the fellows of AIRIE (Artists in Residence in Everglades) and the Miami outpost of the Uruguay-based Piero Atchugarry Gallery will represent the Magic City. Wednesday, December 4, through Sunday, December 8, on the beach at 12th Street, Miami Beach; untitledartfairs.com. Tickets cost $25 to $35; admission is free to children 12 and under.
KEEP MIAMI NEW TIMES FREE... Since we started Miami New Times, it has been defined as the free, independent voice of Miami, and we'd like to keep it that way. With local media under siege, it's more important than ever for us to rally support behind funding our local journalism. You can help by participating in our "I Support" program, allowing us to keep offering readers access to our incisive coverage of local news, food and culture with no paywalls.
Make a one-time donation today for as little as $1.