There's Reportedly a Gigantic #FakeNews Operation Run From Miami (and It's Not New Times!) 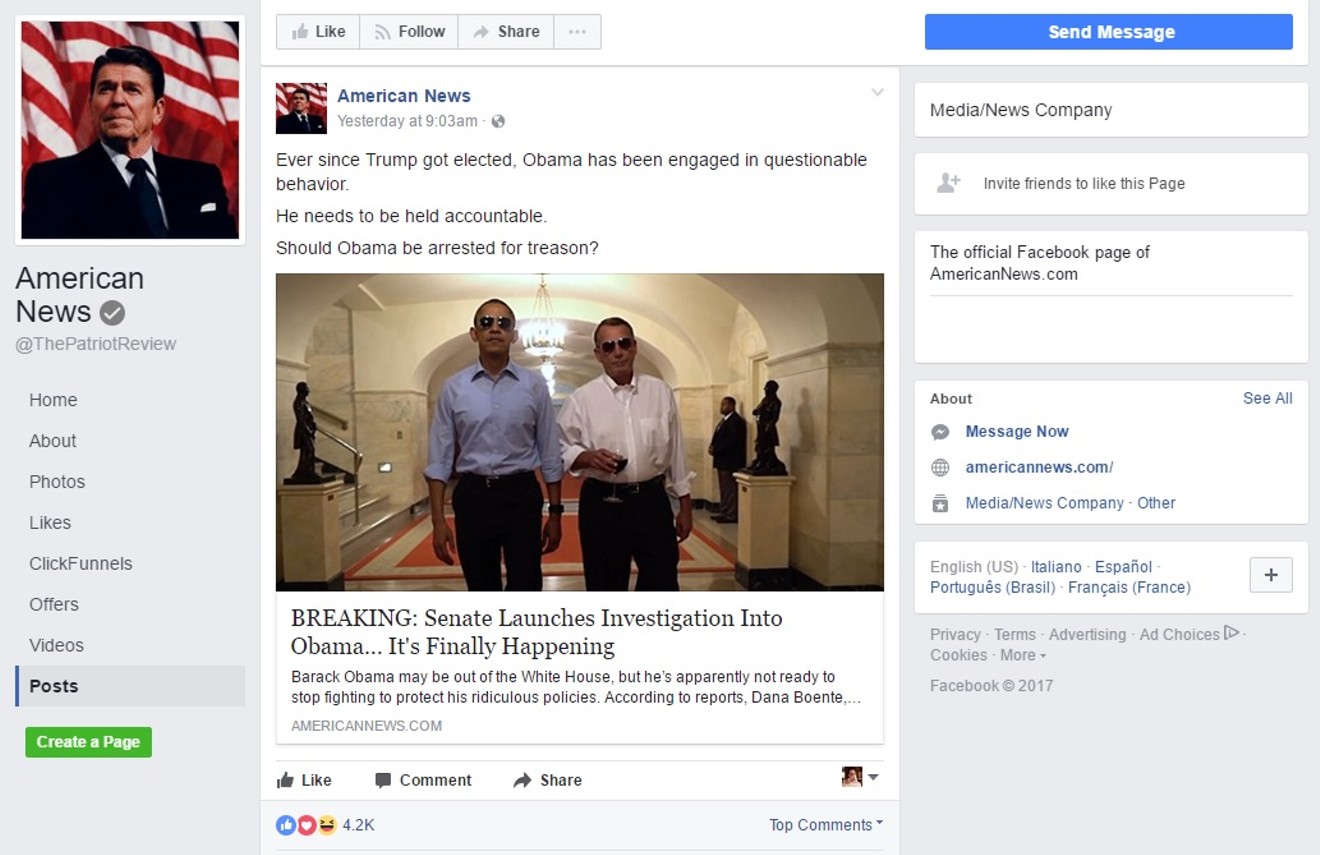 Screenshot via Facebook
Things that are not true: Denzel Washington endorsed Donald Trump; Miley Cyrus is leaving the country now that Trump is president; Barack Obama is about to be charged with treason.

Things that are true: According to a BuzzFeed News investigation, two dudes are cranking out totally false headlines from a house in Miami as part of a huge bipartisan #FakeNews operation.

Thanks to Trump's diarrhea-like Twitter stream, the term "fake news" has gone from a very specific descriptor for fully madeup  to a term that conservatives and alt-righters use to discredit information they don't like. But according to BuzzFeed, the Miami company American News LLC is spouting some real-deal phony facts on both ends of the political spectrum: The news site says it used domain registry and Google Analytics data to track at least four habitually misinformed websites  — Conservative 101, Liberal Society, American News, and God Today — to American News LLC's two owners, Tyler Shapiro and John Crane.

Screenshot via Google Maps
It's unclear who the two men are: Neither BuzzFeed nor New Times able to reach them for comment, and neither man operates an easily searchable social media presence. But the fact that a gigantic money-printing scheme based on lies is headquartered in Miami should shock pretty much nobody.

Some of the sites Crane and Shapiro run have a demonstrably massive following. American News, for example, has more than 5 million Facebook followers. That fact is  because it appears the site publishes the most blatantly false information of the entire group of sites.

Among spreading many other lies, American News published the aforementioned fake Washington, Cyrus, and Obama stories, as well as so-called scoops that the actor Morgan Freeman is "backing" Trump and that — New Times' favorite — "Supreme Court to Nullify the Election... They Are Actually Doing It." (They're not.)

Conservative 101, meanwhile, has raked in more than 2 million likes. The sites themselves look like they were assembled in less than four hours: There's still some filler "lorem ipsum" text at the bottom of the Liberal Society homepage.

Of all the sites, God Today might be the most exploitative: It's basically a feed full of tragic stories and sad images, and every headline asks readers to pray for someone. Take, for instance, the "little girl beaten and thrown from car by mother's boyfriend" or, apparently, country singer Dolly Parton, who "needs our prayers now after revealing secret medical condition."

As BuzzFeed reported, the sites' owners don't do much to hide the fact that these so-called news outlets are a sham: Both Conservative 101 and Liberal Society, which, as evidenced by their names, pander to right- and left-leaning crowds, publish nearly identical content — with only slight tweaks to make the stories seem partisan.

And, apparently, so are the authors: BuzzFeed also noticed that two author photographs on the God Today outlet were ripped right from stock photos.