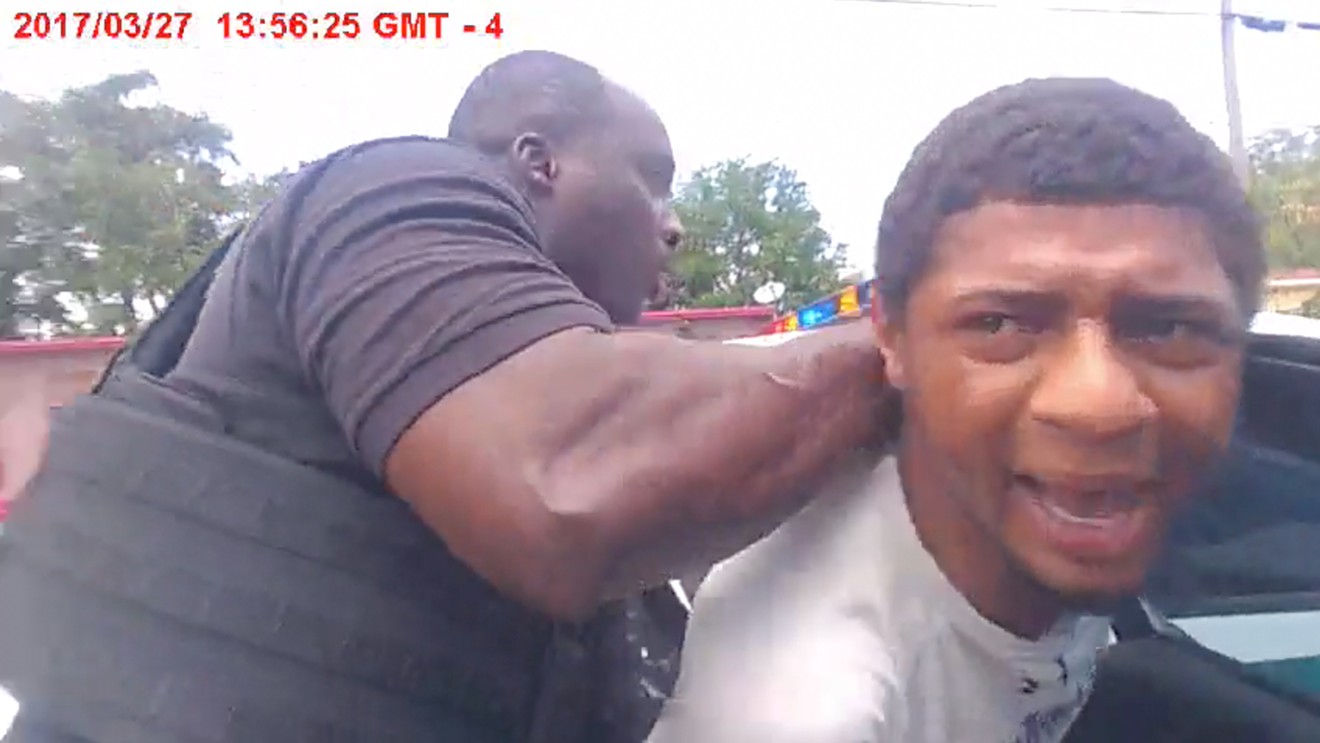 Ephraim Casado allegedly did nothing but throw a bottle from his car on March 27, 2017. According to documents and footage New Times obtained, Miami-Dade County cops responded by repeatedly punching him in the face, grinding his body into the asphalt, and painfully hoisting him into the air by his arms before arresting him on charges of "resisting an officer with violence," criminal mischief, and misdemeanor cannabis possession.

After reviewing body-camera footage from the ordeal, prosecutors dropped the case and wrote that the video evidence directly contradicted what the cops claimed had happened. MDPD detectives punched the suspect on video and later lied on their arrest affidavits, prosecutors discovered last August. But State Attorney Katherine Fernandez Rundle's office never charged the officers.

"I reviewed the body-worn camera footage and was troubled by what I saw," Assistant State Attorney Natalie Pueschel wrote in an August 9 close-out memorandum clearing Casado of any wrongdoing. "It is my belief that these officers were less-than-truthful about the actual events that occurred during this incident."

Despite the clear violations detailed in the memo, MDPD spokesperson Det. Alvaro Zabaleta confirmed that the two officers involved are still active and that the department's internal affairs investigation "revealed no criminal or administrative wrongdoing; therefore, there is no disciplinary action forthcoming." Internal Affairs ruled that Pueschel's account of the events was inaccurate.

The memo from Rundle's office details what seems to be a laundry list of policy violations, if not downright violations of the law. Officers claimed that Casado refused to pull over and that when he finally stopped in front of his house, he exited the car "concealing his hands" before "committing a battery upon the detective" outside his home on NW 91st Street in West Little River.

But when prosecutors obtained the body-camera footage, the clip clearly contradicted the cops' sworn arrest affidavits. Prosecutors wrote that the footage actually shows Casado exiting his car calmly with his hands in the air and that the cops forced him out of his car at gunpoint before punching him.

In the gruesome body-camera footage, which New Times also obtained, the video show Casado exiting his car by sticking his hands directly in the air above his head — and a cop then grabs Casado by the arm and whips him around and pins him onto the trunk of the car.

Miami-Dade County Police
Another video begins by showing a cop pummeling Casado in the face.

"You just punched me in the face!" Casado yells.

"Fucking right I did," the cop responds.

In separate footage from a different officer, Casado is shown slipping out of the officers' grasp, before an officer grabs him by the wrist and pulls him to the ground. Casado briefly rolls on top of the officer before a team of cops handcuffs him.

In a different clip, Casado can be heard screaming in pain in the back seat of the police car. Seconds later in the same clip, one of the cops turns to the camera and says to another officer: "Don't say anything. The cameras are rolling." Casado also repeatedly complains that officers put him in handcuffs "without reading [him his] rights."

"My head is bleeding and my mouth is bleeding!" Casado shouts in one portion of the footage. "What's your badge number?"

"What are you going to do about it?" one officer asks sarcastically in response. Another officer repeatedly refuses to tell Casado's friends and family why he's being detained.

Casado then kicks the door of his police car a few times — the officers respond by ripping Casado from the car and placing him face-down on the sun-baked asphalt. He screams in agony as a team of cops pins him to the ground, uses a "hobble" restraint to tie his ankles together, cuffs his arms behind his body, and hoists him into the air by his wrists, yanking his arms backward in a painful position.

Prosecutors noted the officers seemed to switch their body cameras on and off during the struggle:

Miami-Dade County State Attorney's Office
Casado filed a lawsuit in federal court last week against MDPD and the officers involved. His lawyer, Igor Hernandez, told New Times yesterday that Casado was stuck living on house arrest for four months while he waited for prosecutors to drop the case. Hernandez said that in addition to getting punched in the face "six or seven times," Casado was also "in the process" of getting a new job but lost his chance because he was stuck at home while the case progressed.

"This case should not have been filed, but they proceeded due to all the allegations that the cops made up," Hernandez said. "The physical aspect of this case is one thing, but the loss of liberty too was probably even worse. Plus, this is just not right — cops can’t just be doing this kind of stuff."

The county has not yet responded to the lawsuit in court; MDPD does not comment on active lawsuits.

Why hasn't Rundle's office charged any of the officers involved with lying in their sworn statements? Her spokesperson, Ed Griffith, said only that the decision not to charge the cops was "addressed in the case file."

Rundle's office has been criticized repeatedly for refusing to discipline police officers and state employees for wrongdoing. She has never charged a Miami-area cop for an on-duty killing during her 25 years as the county's top prosecutor. This past April, she quietly cleared an MDPD cop for fatally shooting a Liberty City man despite the fact that her own prosecutors confirmed 27-year-old Anthony Ford was unarmed.

This is also not the first time Rundle's prosecutors have declined to take action after mentioning in close-out documents that cops have lied in sworn reports. In 2012, prosecutors wrote that then-City of Miami Police Lt. and Fraternal Order of Police President Javier Ortiz had written sworn documents that were "inconsistent" with video evidence taken at the scene of a police-involved beating. Rundle's office never charged Ortiz with a crime.

Earlier this year, Miami-Dade County Mayor Carlos Gimenez vetoed the creation of an independent civilian oversight panel that would have investigated complaints against Miami-Dade County Police officers. MDPD Director Juan Perez stood in front of the county commission in February and argued there is "no widespread mistrust of his police department" and, therefore, the panel was "not needed."

This piece has been updated to include further details from Casado's arrest report, which was obtained after this story was initially published.
KEEP MIAMI NEW TIMES FREE... Since we started Miami New Times, it has been defined as the free, independent voice of Miami, and we'd like to keep it that way. With local media under siege, it's more important than ever for us to rally support behind funding our local journalism. You can help by participating in our "I Support" program, allowing us to keep offering readers access to our incisive coverage of local news, food and culture with no paywalls.
Make a one-time donation today for as little as $1.