When Fidel Castro died in 2016, thousands of Cuban immigrants and their descendants paraded through Miami's streets waving the Cuban flag. When Donald Trump himself came to speak to a group of Bay of Pigs veterans who'd rebelled against Castro, the Brigade 2506 vets draped a Cuban flag behind the soon-to-be president.

It would be laughable to suggest that any of these Cuban-flag-wavers supported Cuban communism. But a number of Republicans have now decided to smear Parkland massacre survivor Emma Gonzalez, a woman of Cuban descent, as a communist for wearing a Cuban flag patch on her arm during her iconic speech at Saturday's March for Our Lives protest in Washington, D.C.

Leading the charge of complete dunces is Iowa Rep. Steve King, who spends most of his days posting racist missives that seem to be ripped directly from white-nationalist web forums. Naturally, the image of a Latina woman with a shaved head calling for gun reform on national television broke King's brain.

"This is how you look when you claim Cuban heritage yet don’t speak Spanish and ignore the fact that your ancestors fled the island when the dictatorship turned Cuba into a prison camp, after removing all weapons from its citizens; hence their right to ," he wrote in a Facebook meme.

Ignoring the fact that King, a white man, is scolding a Cuban-American woman for not being sufficiently Cuban-American according to his own insane standards, King's argument is not quite accurate, either. The Cuban constitution technically guarantees the right of citizens to "armed struggle against anyone who tries to overthrow the political, social and economic order." Immediately after seizing power in 1959, Castro actually widely encouraged civilian gun ownership — citizen militias helped put down the CIA-backed Bay of Pigs invasion in 1961. Since then, the regime has taken a much stricter stance against guns and used gun-register lists to find gun owners and "encourage" most to turn their weapons in. But the nonpartisan GunPolicy.org estimates there are still roughly 220,000 civilian firearms in the country, and notes that private handgun and long-rifle ownership is allowed in restricted cases for hunting or target shooting, for example.

(King also keeps a Confederate flag on his desk — despite being from Iowa, a state that supported the Union in the Civil War. Who's supporting tyranny again?)

Moreover, the underlying notion that Gonzalez's flag-patch represented support for the Castro regime is insane. Yet other conservative commentators have tried to link Gonzalez to Cuban communism outright. Take Fort Lauderdale Fox News talking-head John Cardillo, who said she was wearing the flag "in support of an oppressive communist regime."

ICYMI, @Emma4Change was proudly wearing a Cuban flag in support of an oppressive communist regime at the #MarchForOurLives. pic.twitter.com/4J8oP9xKjP

Have you all met Emma Jane Gonzalez?

Wears the flag of a communist country on her right sleeve while she preaches "peace" and an "end to violence"#MarchForOurLives pic.twitter.com/Mis6OzYAdU


So, time for a brief history lesson: The Cuban flag was designed in 1849 by very not-communist activists fighting against the Spanish slave owners who'd colonized the island. The flag represented the Cuban people during the Ten Years' War and the Spanish-American War — after the Americans seized Cuba from the Spanish at the end of the conflict in 1899, the U.S. flag actually flew over Havana until 1902. That year, the then-Republic of Cuba formally adopted the classic "Cuban" flag as its own, a full 57 years before Castro took power.

Hilariously, there actually even is a real flag that represents Cuban communism — the flag of Castro's 26th of July Movement (the group of revolutionaries who overthrew then-dictator Fulgencio Batista), which looks like this: 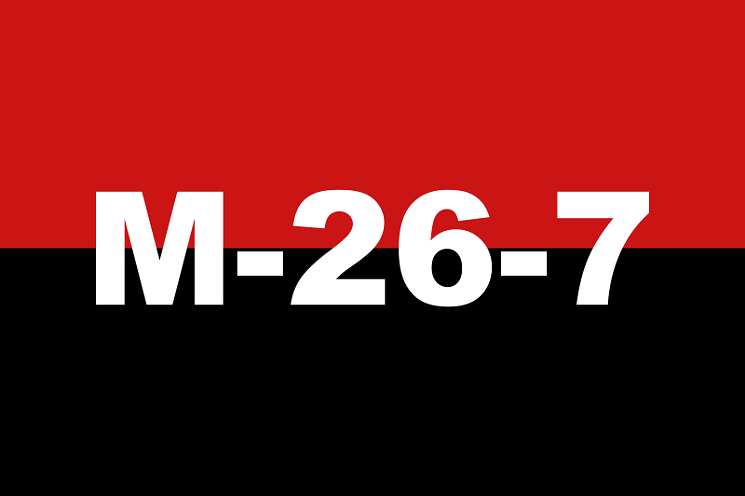 Oliver Wolters / WIkimedia Commons
Of course, anyone who's ever walked through Little Havana even once understands that simply waving a Cuban flag does not make one a communist: If anything, the opposite seems to be true in America. Cuban right-wingers love the Cuban flag — to them, it represents the hope that the nation will one day be liberated from the Castro family. The Bay of Pigs Veterans Association, the ultraconservative group of counterrevolutionaries the CIA paid to attack Castro in 1961, currently sells T-shirts, hats, mugs, and key chains emblazoned with the Cuban flag. The Bay of Pigs Veterans Association endorsed Donald Trump in 2016.

By John's extremely stupid logic, everyone who took to the streets of Little Havana waving Cuban flags after Fidel Castro's death were also supporting an oppressive communist regime https://t.co/CqK0r5xLhB

...because no patriotic American would ever be seen with a Cuban flag. pic.twitter.com/zpBsMCshth

Sure, Castro regime supporters also wave the flag whenever they feel particularly patriotic — because it's the nation's only flag and it means a thousand different things to a thousand different people, just like the American flag does. Gonzalez herself has not explained why she was wearing the arm patch, but it's fairly safe to say she wasn't raised as a , since her father fled Castro's Cuba in 1968 and moved to New York City, according to Univision.

Of course, people like Cardillo, King, and their ilk are smart enough to know these things — it's more likely they simply don't care about lying to the public and (correctly) assume most of their online followers are too uninformed to understand basic history.

The rest of the attacks on Gonzalez and the other Parkland survivors fighting for gun control have been just as outwardly stupid: Someone photoshopped an image of Gonzalez ripping up the U.S. Constitution, while Breitbart has apparently decided that David Hogg's "raised fist" over the weekend counted as some sort of Nazi salute. (That's not to mention the absurd crisis-actor conspiracies that bubbled up online last month.)

This is all quite clearly part of a campaign to attack and degrade a bunch of teenage survivors of gun violence by any means since none of these conservative trolls are capable of arguing with any of these teens on the actual merits of law.

Update 3/27: Ileana Ros-Lehtinen, Miami's longtime Cuban, Republican congresswoman, says she spoke to Emma Gonzalez's father, who reiterated that neither Emma nor the Gonzalez family supports the Castro regime. Ros-Lehtinen, who has typically taken a hard-line stance against the Castros, scolded King for howling about things he clearly does not understand.

Many #Miami homes also have Cuban flags, @SteveKingIA. That doesn’t equal support 4 Castro. Folks should learn about our community before criticizing a high school student

Furthermore, the Cuba One Foundation, a nonprofit that helps the children of Cuban immigrants visit the island and learn about their heritage, posted an open letter to King today:

"The Cuban flag has nothing to do with communism, but it does have a lot to do with freedom," wrote." Jose Martí appealed to it in his struggle for independence and abolitionists, like Carlos Manuel De Cespedes, proudly flew it while liberating thousands from the shackles of slavery. It is the same flag that our parents, grandparents, and many in our community display alongside the stars and stripes as a reminder of their heritage, the land they left behind, and a profound love for the adopted country that protects our God-given rights."