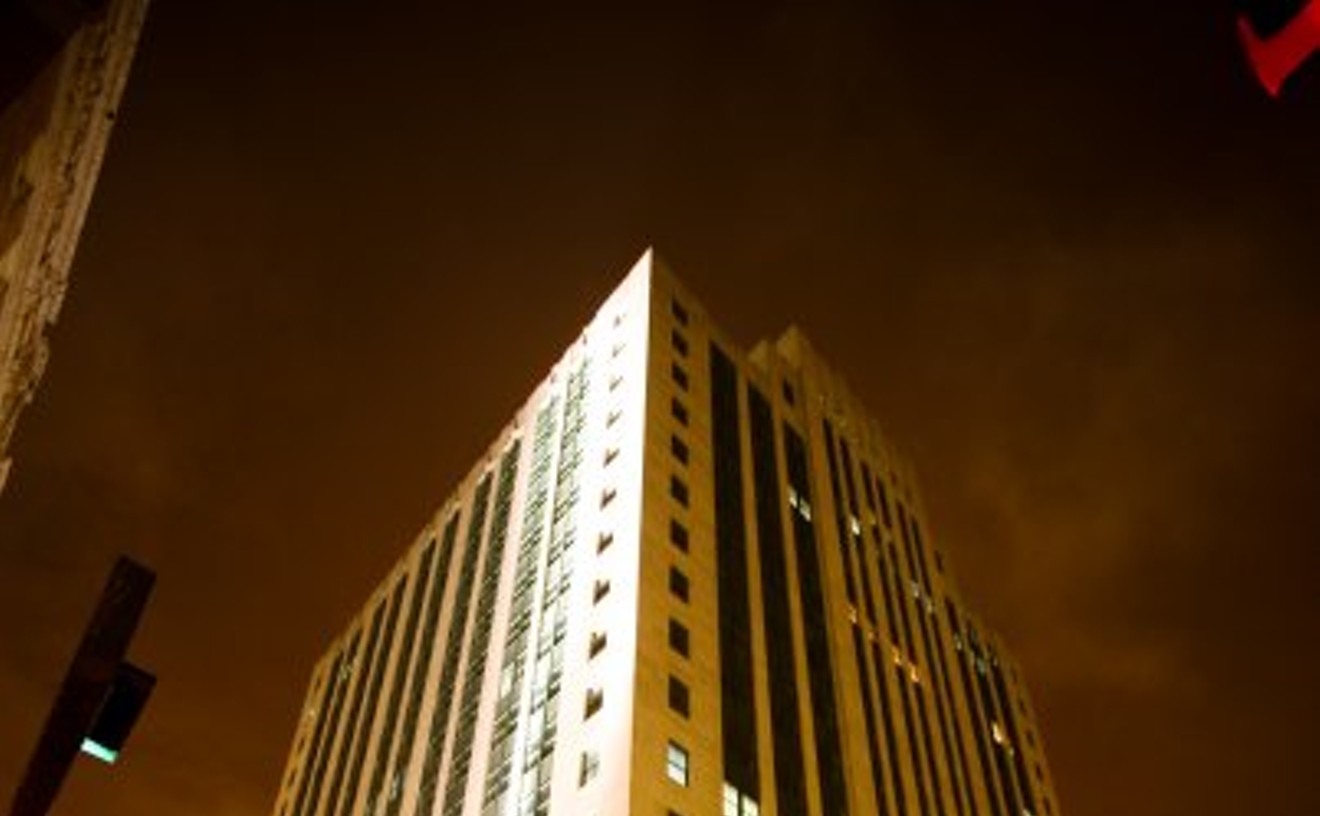 Missy Meyakie LePaige likes to start things off real nice and slow. She makes her grand appearance in a full-length coat. Strutting across the stage, she resembles not so much a runway model but a warrior queen ascending her throne. Don't be mistaken, though — that's not the show, because once the coat comes off, all bets are off. LePaige is the kind of performer who can kick a leg clear up to her face, twist 360 degrees, and land in a perfect split in one fluid motion. Did we mention she's more often than not doing this at Palace, South Beach's oceanfront LGBT wonderland? Oh yes, she's landing those splits and death drops right out on Ocean Drive's sidewalk. She's the kind of queen who has literally shut down traffic and rolled her body across the street. So when she performs (you can catch her multiple times a week at Palace), you better show up to pay tribute — and bring your tip money with you.

WSRF is the first and only Haitian-owned radio station in the nation. Boasting 10,000 watts of AM power, it packs a lot of juice. Every Monday through Friday from 1 to 2 p.m. on his show, Explosion, Severe Livincoeur uses those airwaves to promote all of the Haitian music industry's rising stars. Monsieur Livincoeur doesn't just spin, though. He spikes his shows with interviews and discusses the best bands, hottest clubs, and latest tracks in lively Kreyol with a rhythm all its own. And his show's perfectly engineered and technically sound audio quality far outshines the competition.

Mamey (as in the tropical ingredient found in Cuban batidos) is a vinyl-loving disco freak whose weekly show for FIU radio is called Supernature. While some DJs fill airtime with self-indulgent chitchat, Mamey Disco lets his music do the talking by artfully blending Miami's disco classics with the rarest of gems from his crate-digging exploits. Featuring a massive collection of freestyle, Miami bass, soul, funk, R&B, and early dance hits, Mamey's two-hour block is a commercial-free ride through boogie music at its best.

Like his lifelong foe Fidel Castro, Armando Pérez Roura refuses to fade quietly into the annals of history. The 85-year-old radio commentator is still the loudest voice of El Exilio hardliners manning the Spanish-language airwaves. Born January 11, 1928, in Mantanzas, Cuba, Pérez Roura began his broadcasting career when he was 15 years old. After fleeing the island in 1962, he quickly became one of Miami's first Cuban-American rabble-rousers. In the 1980s, Pérez Roura founded Radio Mambí, where he still hosts morning and afternoon programs with a single goal: toppling his country's communist regime. Earlier this year, Univision rechristened Radio Mambí's studio the Armando Pérez Roura Studio as recognition for his contributions. He refuses to retire until Cuba is free. At a time when Univision, which now owns Radio Mambí, is broadening the appeal of its Miami AM Spanish-language stations, Pérez Roura is one of the lone voices keeping conservative Cuban-American radio alive in Miami. His diatribes are laden with questionable hyperbole, such as regularly comparing the Cuban plight to the persecution of Jews in World War II. But it's that spooky, conspiratorial tone that makes Pérez Roura a rare gem of originality on the radio today.

An outline of Jackie Nespral's perfectly coiffed bob might as well be the logo for NBC 6's news department. Just a year shy of her 20th anniversary at the station, Nespral is one of Miami's few longtime, on-air veterans left after a series of shakeups, firings, and retirements. She has anchored through a studio relocation, numerous co-anchors, and just about every major news story in South Florida over the past two decades. Perhaps she owes her longevity in this town to her Miami roots. She got her start in television as a model on Sábado Gigante, was an Orange Bowl queen, and has degrees from the University of Miami and Florida International University. She escaped for a few years in the early '90s to become the first Hispanic news anchor on American broadcast TV by hosting the weekend edition of Today. Ultimately, though, Miami pulled her back, and she's been here ever since. We all know what the J in WTVJ really stands for.

When it comes to adding levity to América TeVé's news-heavy programming, the independent Hialeah Gardens-based Spanish-language TV station relies on Cuban-American comic Jose Carlucho to make viewers happy with spicy music, eyebrow-raising skits, and one-on-one interviews with local Hispanic entertainers. For the past year, Carlucho has hosted El Happy Hour, a Monday-through-Friday live variety show in the important 7 p.m. lead-in spot before the station's prime-time news-oriented programs. He's been crucial to drawing younger viewers to América Tevé. In April, the station reported that people in the 18-to-49 demographic watching El Happy Hour grew by 13 percent and increased the number of people in the 25-to-54 demographic by 27 percent during the fourth quarter, compared with the same period in 2012. Carlucho is now pulling in bigger viewership numbers than his mentor, Fernando Hidalgo, who hosts his own variety show on rival station MegaTV. The pudgy, floppy-haired host has been a Miami radio and TV personality for more than a decade. Before El Happy Hour, Carlucho cohosted La Cosa Costra, a live show that tackled local political news with tongue-in-cheek humor. He's known for impersonating former Hialeah Mayor Raul Martinez and Fidel Castro — a damned valuable skill in this town.

It's not every day you get to watch a beauty queen turned off-Broadway star turned recording artist turned TV host turned meteorologist deliver the weekday morning forecast. Unless, of course, you tune in to CBS 4 News from 5 to 9 a.m. and at noon to watch Lissette Gonzalez do her thing. The brown-haired, svelte-figured beauty has been CBS 4's a.m. weather girl since 2007. Her bright smile, charismatic personality, and ease in delivering the weather in a simple yet thorough manner make it easy for Gonzalez to connect with her viewers. Prior to covering hurricanes on CBS 4, Gonzalez participated in the Miss University of Miami scholarship pageant and went on to be named Miss Miami, then Miss Florida, and was second runnerup in the 1998 Miss America Pageant. She later landed a gig as Maria in the off-Broadway production of 4 Guys Named José and una Mujer Named María. Her role caught the attention of RCA Records, and in 2001 Gonzalez signed a deal to record with Grammy-winning producers. With her beauty pageant and Broadway days behind her, Gonzalez is doing what she does best: forecasting the weather. Every now and then, the meteorologist is known to step out of the studio and into the streets, where she delivers the weather from major outdoor events such as the Fort Lauderdale International Boat Show. Who knows? Maybe one day she'll surprise South Florida and sing the weather forecast.

Don't let his nerdy looks fool you. Marc Caputo coming at you with a notebook, tape recorder, or camera means you get on a plane out of Miami. If he's writing about you, chances are you're toast. He owned the political beat in Florida last year with timely scoops and exclusives on the state's biggest political players, specifically U.S. Sen. Marco Rubio and his embattled pal, ex-U.S. congressman David Rivera. Conservatives and liberals bash his work with equal venom — solid affirmation that Caputo doesn't kowtow to either team. The reporter, who was raised in Key West, worked with El Nuevo Herald editor Manny Garcia to expose the nefarious campaign of Democratic congressional candidate Justin Lamar Sternad, the former hotel employee accused of being a ringer recruited by Rivera to run against the man who eventually unseated him, Joe Garcia. As a result of Caputo and Garcia's exclusive, the FBI opened a criminal probe that resulted in the recent arrest of Sternad and the temporary disappearance of his campaign manager, Ana Sol Alliegro, a close friend of Rivera's. A laid-back, existential Conch Republican, Caputo landed in journalism by necessity. He graduated from the University of Miami with a general studies degree, with a speciality in early-20th-century author James Joyce. Though penning a thesis on the mysticism in Chapter 10 of Finnegans Wake is certainly an ambitious writing endeavor, it doesn't pay the bills. So he took up news reporting, bouncing around his hometown to Naples, Arizona, and West Palm Beach before joining the Miami Herald in 2003. If you're holding elected office and planning any shenanigans in 2014, watch out for this watchdog.

Rosh Lowe must annoy the hell out of the Miami-Dade State Attorney's Office and have a really friendly relationship with the lawyers at his local coffee shop. The dude can summon the developing-news banner a week in advance of the release of an official affidavit with something as vague as "some cops are in hot water in the City of Miami." No TV reporter can cobble together more dramatic footage for a news package. He can motivate a victim to lie on the ground in front of the camera to reenact a mugging for the sake of the most thorough report. And no TV news journalist working the street beat seems as deeply in touch with mortality as Lowe. He knows the right words to not only get a distraught person on camera but also have that guy break down while considering his loss, adding the right context to remind 7News viewers that they better be grateful to still have their sorry lives.