American Mask, a Flag in the Shape of a Ku Klux Klan Hood, Shows in Wynwood

Kristin Bjornsen
A University of Miami faculty exhibit opening next week will include American flags fashioned into Ku Klux Klan hoods on a cart with wheels shaped like like a Nazi swastika.

Three of the hoods, which were created by UM Professor Billie Lynn, were placed in the window of the University of Miami gallery in the Wynwood Building, at 2750 NW Third Ave., this morning. They are called American Mask and are meant to be displayed "in the window like mannequins," gallery director Milly Cardoso says.

They are part of a faculty exhibition at the gallery October 23 through November 12.

Lynn, who has been an associate professor of sculpture at UM for 12 years, says she is "from Louisiana, and the Klan is really strong there. I am from the place where these people live. I am these people in some way." She earned a degree from Tulane University in New Orleans and a master of fine arts in sculpture at the San Francisco Art Institute.

Lynn says she was driven to create the piece after watching people walking with American and Nazi flags during the recent protests in Charlottesville, Virginia. "I consider myself a patriot," she says. "We have to wake up and see what is happening in our own country." 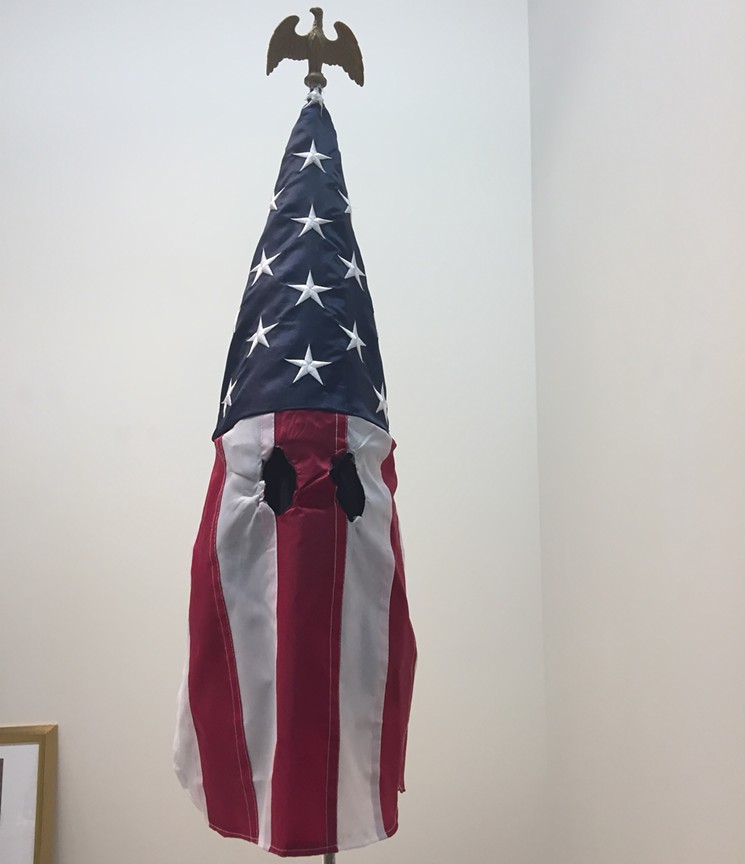 American Mask
Chuck Strouse
This is not her first controversial work. A decade ago, she created a dollhouse modeled after the Abu Ghraib prison and included GI Joe and Barbie figures. The piece was shown in Wynwood and Baltimore. Also ten years ago, she built Homeland Security Vehicle, a silver wheelchair equipped with a sphere that gave her "bionic listening," and rolled around the Capitol Mall while tailed by secret service. "I listened to people's conversations. Every 100 yards, we were stopped by security teams. They hated it because I had a Homeland Security insignia. They didn't like anyone protesting using their insignia." She also once showed a flag that bled at Art Basel.

"I have been really disturbed by all the things that have happened in this country, particularly since the election," she says. "People really felt they could hide their racism behind the flag... The flag is not sacred in itself."

Almost as soon as American Mask was placed in the window, arguments began. Miami New Times is located in the same building as the gallery, and an employee posted a picture on Facebook. Dozens of commenters called it everything from "disgusting" to "patriotic."