Leon Vitali on Working With Stanley Kubrick: "It Could Get Pretty Hairy" 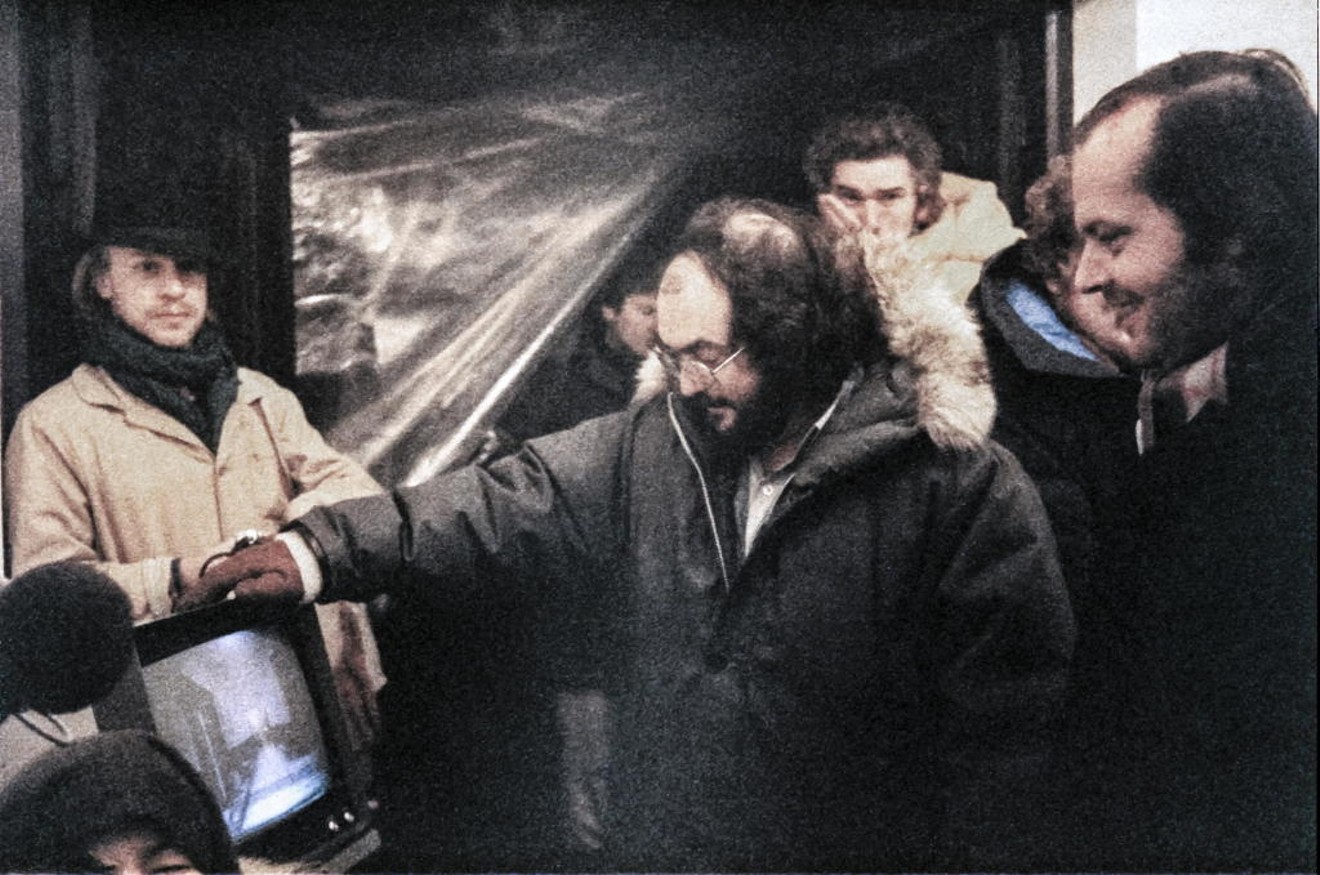 Leon Vitali, Stanley Kubrick, and Jack Nicholson on the set of The Shining. Courtesy Kino Lorber
Few movie buffs ever consider the relationship between the filmmaker and the filmworker. The first is often recognized above a movie’s title — names like Spielberg and Coppola. The other is the anonymous grunt on set often unknown to the common moviegoer. In fact, the term "filmworker" corresponds to a role so unacknowledged that it was made up for a documentary about one such person who worked for one of the most famous filmmakers, Stanley Kubrick.

Leon Vitali gave up acting around 1977 to be Kubrick’s right-hand man. Yet despite a comprehensive exhibition of the archives of Kubrick put on display at the Los Angeles Museum of Contemporary Art about five years ago, Vitali wasn’t even invited to the opening night. This fact is revealed toward the end of Filmworker, Tony Zierra’s documentary about Vitali, which will have its Florida premiere this Thursday as part of the Miami Jewish Film Festival.

Vitali, who still works in quality control of the presentation of Kubrick’s movies, remains humble about the idea that he could be the subject of a movie. “It’s a weird feeling because it’s almost like someone’s come and filmed all your therapy sessions and put them on the screen,” he says by phone from his home in Culvert City, California.

Zierra, he says, spent hundreds of hours with him over a period of three years to ask him what working so intimately with Kubrick was like, which actually comes across as harrowing at times. “Really, it could get pretty hairy — put it that way,” says Vitali, who often worked 16-hour days for the legendary director. This includes one Christmas Day when Kubrick kept calling him with requests while Vitali slugged whiskey to numb the pain of an abscessed tooth in order to power through the work.

Zierra also collected testimonials from an impressive cast of characters close to the films of Kubrick, including actor Matthew Modine, who played Private Joker in Full Metal Jacket, and Danny Lloyd, the onetime child actor who played Danny Torrance in The Shining. Many of the actors express sympathy for Vitali and what he gave up to become Kubrick’s assistant. At one point in the documentary, Modine, who Vitali says is a "dear, dear friend," expresses sadness for the sacrifices Vitali made.

Leon Vitali
Courtesy Kino Lorber
“It’s only really part of the picture, so to speak,” says Vitali, noting he was raised to be a worker after his father died. He and his two siblings had to pitch in to stay with their mother when he was just 8. “You would never be allowed to do that now. It couldn’t happen. It would be child abuse,” he says with a small laugh. “It never felt like that. It just felt like one of the lots of things we had to do.”

Vitali, who was born in the United Kingdom, was once an actor in British TV and film productions. He was inspired to audition for Kubrick after seeing the director’s 1971 film A Clockwork Orange and earned a key supporting role as Lord Bullingdon in Kubrick’s followup, 1975's Barry Lyndon. “It was such a huge, long project,” Vitali says of the period film, “and it was a lot of time of just hanging around and sort of waiting for the actual performing at the time, and the more I saw him setting up and working his lighting and stuff like that, stuff that I’d never given any conscious thought to whatsoever, it just began to be so interesting to me.”

He describes the special bond he formed with Kubrick, who allowed him on the set during days he wasn’t on the call sheet as an actor, something he says Kubrick wouldn’t normally allow. “We had such a wonderful communication that just felt so natural and so easy, from the very first time we met,” Vitali recalls. “It just became a wonderful fascination for me.”

Vitali would go on to work for free in the editing room of the next film he starred in, The Terror of Frankenstein, so he could learn more about the filmmaking process. With that experience, he was hired to be the young Lloyd’s acting coach in The Shining and was then by Kubrick’s side till the director's death in 1999.

This documentary brings Vitali out of Kubrick's shadow, yet he remains modest. “It still feels a little weird to me,” he reiterates. “It really does.” He then immediately turns it around to be about the other filmworkers who are hardly recognized for their behind-the-scenes work and devotion. “It was really about all the below-the-line people that work on a movie. It could be incredible what their contributions are. They’re all very painstaking and they devote themselves to the project, and nobody really knows much about that side of it at all.”