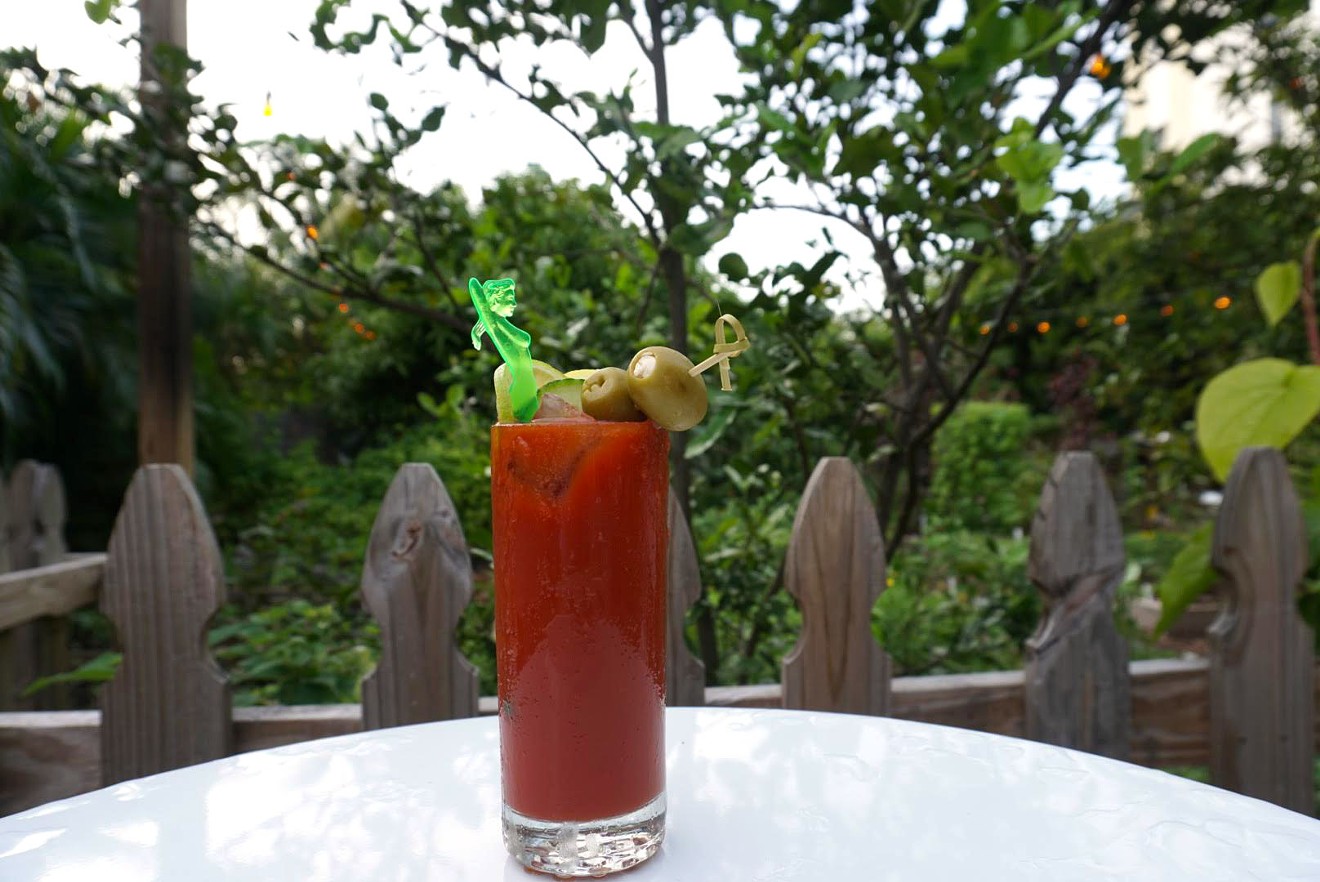 Courtesy of 27 Restaurant
After a week of partying hard to ring in the new year, Miami is need of a major recovery plan. A hearty carb-and-coffee-loaded brunch usually does the trick, but a bold, salty, and savory bloody mary works wonders no matter the time of day.

It’s a simple cocktail that starts with two main ingredients – tomato juice and vodka – and can practically function as a standalone meal, especially when it's garnished with bacon, horseradish, cocktail shrimp, deviled eggs, or various spices.

The trouble comes in figuring out where to find the best. After all, you can’t just let anyone whip up a bloody mary for your hangover cure. Here’s a look at the best variations the 305 offers: 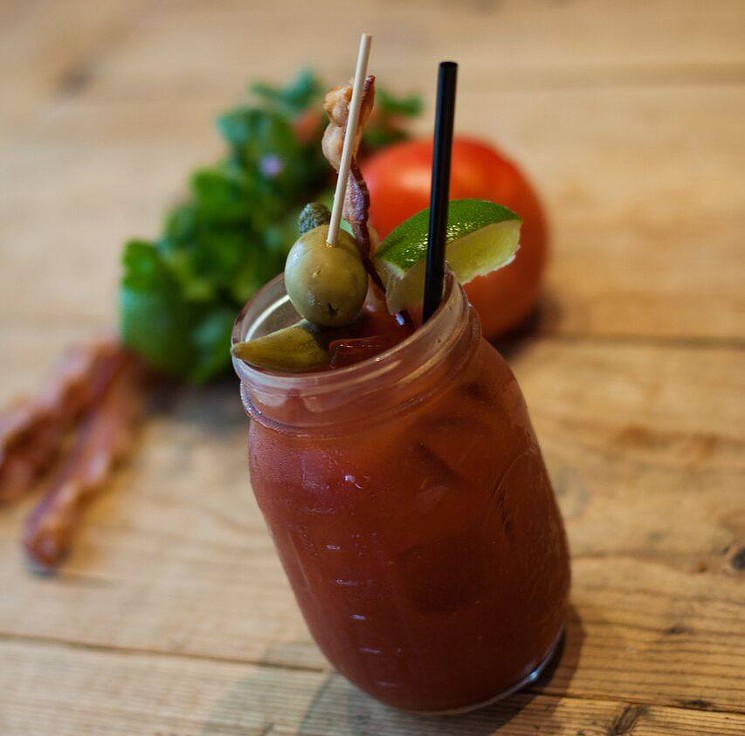 Courtesy of GreenStreet Cafe
2. GreenStreet Cafe
After a night of partying, the Grove’s brunch blockbuster never fails at curing your hangover with its crave-worthy plates and hair of the dog. GreenStreet’s bloody ($11) — featuring fresh tomato juice, horseradish, pepper, and a myriad of seasonings, plus a rim encrusted in celery salt and cayenne pepper — is all you need to bring you back to life. For an extra kick, try the organic green mary martini ($11), made with organic spicy green bloody mary mix and Crop organic tomato vodka. Courtesy Edge Steak & Bar
3. Edge Steak & Bar
Twenty bucks gets you unlimited bloody marys to pair with an impressive Sunday brunch spread, priced at $75 for adults and $35 for children aged 5 to 12, at Edge Steak & Bar. With a menu featuring tacos, cheese and charcuteries, raw bar selections, suckling pig dishes, grilled-to-order items, and decadent desserts, there’s nothing like Edge’s bloody mary to wash it all down. It boasts an extraspicy rim made from Edge’s own spice rub for a kick to start your Sunday funday at the Four Seasons. 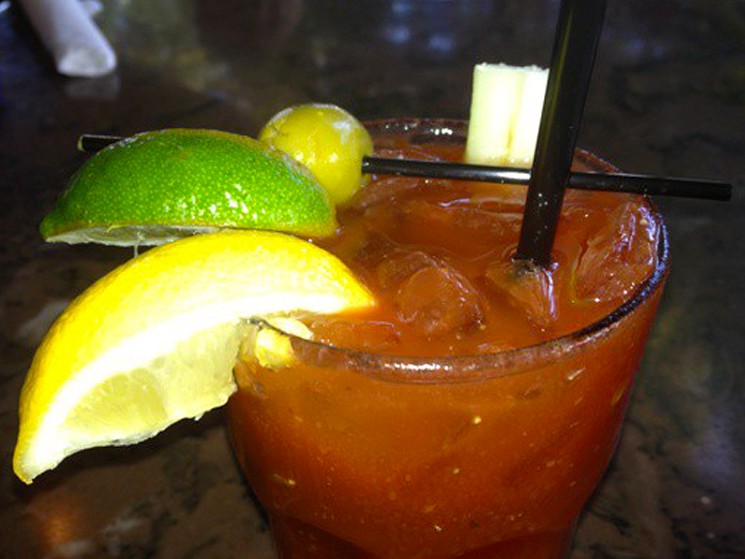 Photo by Laine Doss
4. Berries in the Grove
When perusing the drink menu at Berries, you'll be tempted by nonalcoholic beverages such as fresh smoothies, decadent shakes, and fresh-squeezed juices. But you’re here to imbibe. Order the bloody mary made with L’Chaim kosher vodka for a slightly spicy flavor profile, garnished with olives, celery, and lemon and lime wedges. For $5 each, there’s no harm in ordering five more. Courtesy of The Genuine Hospitality Group
5. Michael’s Genuine Food & Drink
Nestled in the Design District, chef Michael Schwartz’s James Beard Award-winning flagship prides itself on pure and simple dishes made from fresh local produce. The drink options also shine, with the kimchee bloody mary ($13) at the forefront. Made with Absolut Elyx, house-made kimchee, and bloody mary mix and finished off with rock shrimp, this glass shakes things up with each vibrant layer.

next
KEEP MIAMI NEW TIMES FREE... Since we started Miami New Times, it has been defined as the free, independent voice of Miami, and we'd like to keep it that way. With local media under siege, it's more important than ever for us to rally support behind funding our local journalism. You can help by participating in our "I Support" program, allowing us to keep offering readers access to our incisive coverage of local news, food and culture with no paywalls.
Make a one-time donation today for as little as $1.
Maureen Aimee Mariano is a freelance food writer for Miami New Times. She earned a bachelor of science in journalism from the University of Florida before making her way back to the 305, the city that first fueled her insatiable appetite.
Contact: Maureen Aimee Mariano
Follow:
Facebook: Maureen Aimee Mariano
Twitter: @maureenaimee