Gmartnx
III Points has always played outside of the traditional music festival rulebook. One way the fest has broken the mold throughout its half-decade in existence is by conscientiously booking artists who typically get shut out of festival lineups: namely, local acts, women, and gender-nonconforming performers. This year's edition — offering sets by cis and trans women of color spanning the genres of rock, R&B, electronic music, and many others — is no exception.

Until equal representation is achieved, there will be always room for growth. But III Points is doing well enough on this front to warrant a list of the must-see women performing at this year's festival. Here's a look at some of those top performers. 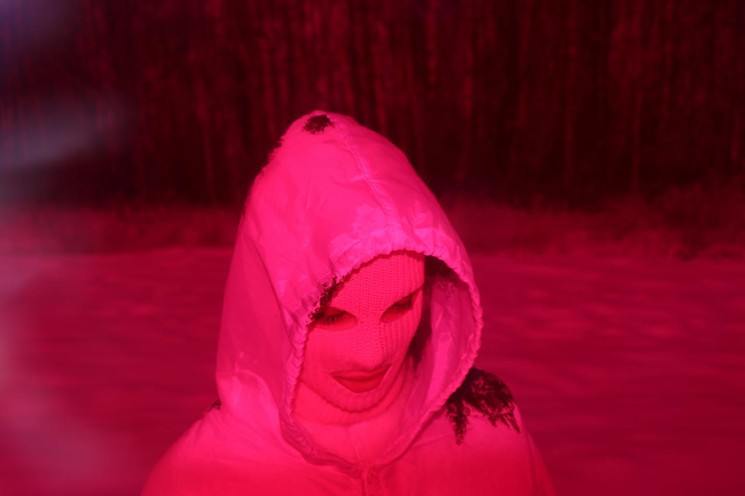 Nadya Tolokonnikova of Pussy Riot.
Chaika
1. Pussy Riot. Their name is Pussy Riot, but they've got more balls than the U.S. president in at least one demonstrable way: They've publicly pissed off Vladimir Putin. The feminist punk band from Russia has protested Putin's antifeminist, homophobic, and authoritarian policies for the better part of the past decade. The women of the activist collective have endured public beatings, imprisonment, and forced labor. Now, in the midst of a looming cold war, allegations of election interference and collusion, and receding rights for marginalized groups around the world, Pussy Riot will take the stage at III Points to show the power of art activism.

SZA
Courtesy of RCA Records
2. SZA. Just two years ago, R&B singer SZA was known as the first lady of Top Dawg Entertainment, an independent hip-hop label best known for introducing the world to the music of Kendrick Lamar and other artists, including Schoolboy Q and Isaiah Rashad. SZA — the only woman on the label — was a rising star in the alt-R&B scene after the success of her early EPs, but she exploded onto the charts after the release of her debut album, Ctrl. Its second single, "Love Galore," catapulted her to headliner status by the time the label embarked on its Championship Tour last summer. A vocal-cord injury forced her to cancel a slew of dates on the tour, including a May concert at West Palm Beach's Coral Sky Amphitheater, but she'll get her belated victory lap in South Florida during III Points. It will be the singer's first time back in Miami since her concert at the Ground in October 2017.

Christina Mendenhall
3. Beach House. If you've never attended III Points, you might erroneously think it's an electronic music festival. But III Points has always had a soft spot for guitars. This year's lineup is the fest's most musically diverse yet, with R&B making a strong showing and a Saturday-night headlining slot for jazz great Herbie Hancock. But experimental indie rock has always been part of the III Points experience, and that's what makes Beach House such a perfect choice for the festival's return. Lead singer Victoria Legrand's dreamy vocals will wash over a South Florida crowd for the first time since the duo's 2017 concert at Revolution Live. Miami has waited for the band since 2012, when Beach House played to a "quarter-filled" theater at the Fillmore. Seven years later, the group will return to the Magic City as a III Points headliner.
4. Erykah Badu. III Points' futuristic setting brings out the weird in Miami's music fans. So it's only fitting that Afrofuturist alien goddess Erykah Badu will lead the ranks to close out the three-day festival Sunday night. It's been a long time since she released an album — her most recent EP, But You Caint Use My Phone, dropped in 2015. But compared to her peers on the III Points lineup, Badu is a veteran with decades of boundary-pushing music under her belt. In an era of fleeting tastes and shortened attention spans, few artists can command the attention that Badu does without a steady stream of new material.

Honey Dijon
Courtesy photo
5. Honey Dijon. Miss Honey Dijon grew up in Chicago and later moved to New York to DJ in the city's underground clubs. But she's no stranger to Miami, where she visits and plays often. It makes sense that III Points would book a DJ as versatile and adaptable as Dijon. Her incorporation of various genres into her musically diverse sets mirrors the overall model of III Points. And as a vocal trans performer and activist, Honey Dijon is living proof the gatekeepers of the music world can and should practice inclusivity.

Laura Lee with her band Khruangbin.
Courtesy of Khruangbin
6. Khruangbin. The Houston-based trio Khruangbin has navigated the festival circuit for years, checking off appearances at blockbuster fests such as Bonnaroo, Austin City Limits, South by Southwest, and Glastonbury. The bandmates played Okeechobee Music & Arts Festival in 2017, and now they'll add III Points to that list a little more than a year after the release of their latest album, Con Todo el Mundo. The group's global approach to songcraft will surely be well received by Miami's melting-pot population.

Dracula
Photo by Karli Evans
7. Dracula. Acoustic folk might not be the first genre that comes to mind when one thinks of III Points, but this festival plays with all kinds of boundaries and expectations. Dracula is a homegrown acoustic duo signed to Miami's recently launched independent music label, Sweat Records Records. The duo made its mark this year with its stripped-down, melancholic cover of Selena's "Como la Flor," which was recognized as one of New Times' best Miami songs of 2018. Anchored by the mournful harmonies of Dorys Bello, the track is a promising preview of the work the pair will do at the new label. Dracula might not play what attendees expect to hear at III Points, but the band's calming tunes will be the perfect respite from the chaos of the weekend.

Suzi Analogue
Photo by Chelsey Croucher
8. Suzi Analogue. Singer, songwriter, producer, and DJ Suzi Analogue boasts an impressive resumé both in and out of the musical realm. Not only is she a musical quadruple threat, but also she's taught production master courses at Ivy League schools and around the globe. She was a cultural diplomat for the United States in Uganda as part of a hip-hop initiative, and her Temple University education in women's studies is reflected in her efforts to galvanize more women to join all facets of the music industry. Suzi Analogue is an undeniable force and the kind of artist who exemplifies the III Points ethos.

Donzii
Dani Miller
9. Donzii. Playing countless festivals and concerts all over Miami in 2018, postpunk outfit Donzii is one of the hardest-working bands in South Florida. Given III Points' penchant for spotlighting local talent, it's only right that the fest booked an act that's helped define the city's sound over the past year. The band's art-rock flair and lead singer Jenna Balfe's unique, guttural vocals will surely be an asset to this year's local lineup. Haute Tension
Photo by Jayme Gershen
10. Haute Tension. Last year was a kind of rock 'n' roll boot camp for the Miami-based psychedelic fuzz-rock band Haute Tension. The group played at least one show every day in August on its 31 Days in Dade Tour, and the endurance test led up to the release of Haute Tension's debut, self-titled album at the end of that month. Now, road-tested and with a new album to show off, the band is ready for prime time on the III Points stage.
KEEP MIAMI NEW TIMES FREE... Since we started Miami New Times, it has been defined as the free, independent voice of Miami, and we'd like to keep it that way. With local media under siege, it's more important than ever for us to rally support behind funding our local journalism. You can help by participating in our "I Support" program, allowing us to keep offering readers access to our incisive coverage of local news, food and culture with no paywalls.
Make a one-time donation today for as little as $1.