The Real Dragwives of Miami Delivers the Campy, Bravo-Inspired Show We Deserve 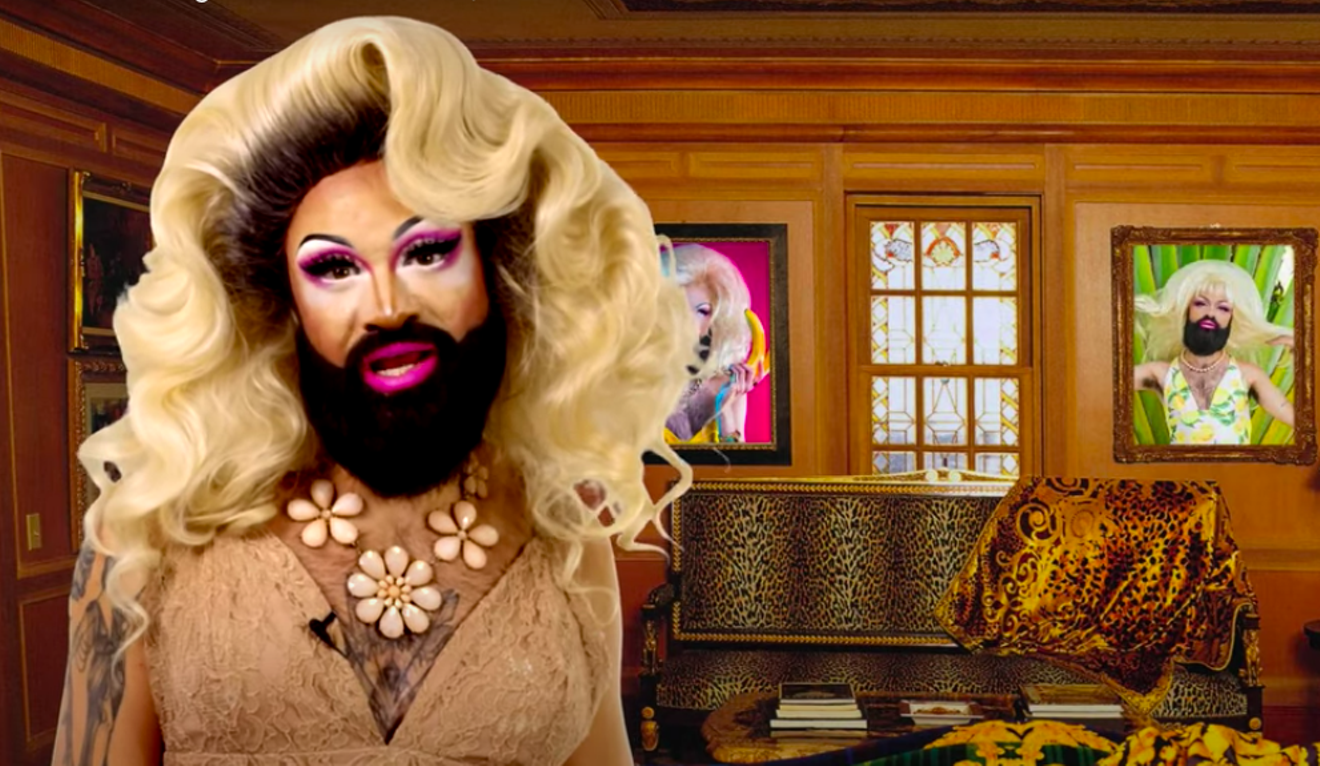 Queef Latina spills the tea in the confessional. Photo courtesy of The Real Dragwives of Miami
Long before Tina Fey joked about the fictional character Queef Latina on Saturday Night Live, Antonio Méndez was cruising Brooklyn with a friend when the name of his yet-to-be-fully-realized drag alter ego came to him in a flash of inspiration.

Fast-forward a few years, and Méndez’s drag persona, Queef Latina — a quipping, colorful ode to the 1950s housewife — is a mainstay of the Miami drag scene. Among the many strings to her bow, the 2019 New Times Best Drag Performer honoree is also the creator and director of the annual queer performance festival Wigwood, a fashion designer with a studio in downtown, and, now, a showrunner.

This Friday, April 24, Queef Latina and her collaborators will premiere the first look at their parody series The Real Dragwives of Miami at the second edition of the Cyber Distancing Drag Festival: 2Cyber2Distant, a remote three-day fest launched by New Orleans residents Tarah Cards and Laveau Contraire, who presented Queef with the serendipitous opportunity to tease the project.

Queef and company conceptualized Real Dragwives, which they plan to release as three-to-four-minute episodes every week on social media, in the summer of 2019, before COVID-19 rocked the world and before our sole means of escapism and fun lay in the digital realm.

“Like with everything I do, it started out as a joke," Queef admits.

While she was hanging out with friend and fellow drag performer Amal Kiosk, the two creatives began to riff on the potential hilarity of spoofing the consumerist reality-TV franchise The Real Housewives.
For those unfamiliar with the popular series from which Dragwives takes its inspiration, the premise revolves around the lives and relationships of a group of housewives who share the common denominators of region, great wealth, and obnoxious personalities.

The franchise has generated ten American iterations, 13 international editions, and countless spinoffs since its 2005 debut and is considered a pop-culture phenomenon.

Though one might have expected Miami to fit the bill as one of the series' success stories — the Magic City is widely viewed as a flashy incubator of big personalities and filthy-richness — The Real Housewives of Miami was a bust, and low ratings led Bravo to cancel the series after three short seasons.

Queef reimagines the show by following the dramatic relationships between four local drag queens: Amal Kiosk, Celia Booze, Opal Am Rah, and herself.

Dragwives is as tongue-in-cheek as they come, and its admiring ridicule is intentional: Queef wants to help Miami save face.

“I think the reason The Real Housewives of Miami failed as much as it did was that Miami should be treated differently," she says. "It’s so over-the-top and crazy anyway. I think Dragwives fits in more because we’re making fun of that. We’re campy; we’re pretentious; we’re superficial.”

The first season, which is as loosely scripted as the Housewives franchise, will serve as an introduction to the show’s outrageous characters, from Celia Booze — an heiress to a rum conglomerate — to Amal Kiosk’s pro-Trump persona. In one episode, Kiosk scams the other Dragwives into donating money at a Save the Manatee fundraiser, a front for her personal GOP political campaign.

“I know that sounds like a superserious topic, but it’s all supercomical, super-Miami, and just silliness,” Queef confesses.

Opal Am Rah (center) and Queef Latina got the juicy gossip.
Photo courtesy of The Real Dragwives of Miami
Finding the perfect Dragwives came as organically as the conception of the show. Queef credits Celia Booze, who has the dual role of Dragwife and series editor, for getting the project off the ground. The final addition was Opal Am Rah, with whom Queef had previously collaborated and “is just someone who brings a lot of sassy energy and is always down for any absurd adventure.”

The series was shot at various locations around Miami, including at parties and at Kiosk’s apartment, and made ample use of green screens. After sitting on the footage for nearly a year, the group was motivated by the current state of affairs to finish what it had started and offer viewers some much-needed comedic relief.

Dragwives is not Queef's first foray onscreen. She previously starred in several projects, including Karli Evans and Cassandra Keith's documentary, Emergence. But this marks the first time she has conceived and cocreated an original series from scratch.

“It's a project we've devoted a lot of time to the past few months," Queef says. "Everyone is so sick of Netflix, and they want something new. We thought the Cyber Distancing Festival was a great platform to get some movement going before we post it.”

The castmates hope to attract a national following for the show to complement their loyal and vocal Miami fan base. The goal is to attend events as the Dragwives, do meet-and-greets, and, Queef says, “basically [get] paid to cause drama at parties and film it for the show to bring more attention to the events themselves” once quarantine is lifted.

Queef adds there's plenty of behind-the-scenes drama for fans to sample in the form of gag reels, which will be posted on the Dragwives' Instagram page and YouTube channel in the weeks to come.

The Real Dragwives of Miami. Premieres 10 p.m. Friday, April 24, as part of the Cyber Distancing Festival, or catch up on the Dragwives' YouTube channel.
KEEP MIAMI NEW TIMES FREE... Since we started Miami New Times, it has been defined as the free, independent voice of Miami, and we'd like to keep it that way. With local media under siege, it's more important than ever for us to rally support behind funding our local journalism. You can help by participating in our "I Support" program, allowing us to keep offering readers access to our incisive coverage of local news, food and culture with no paywalls.
Make a one-time donation today for as little as $1.