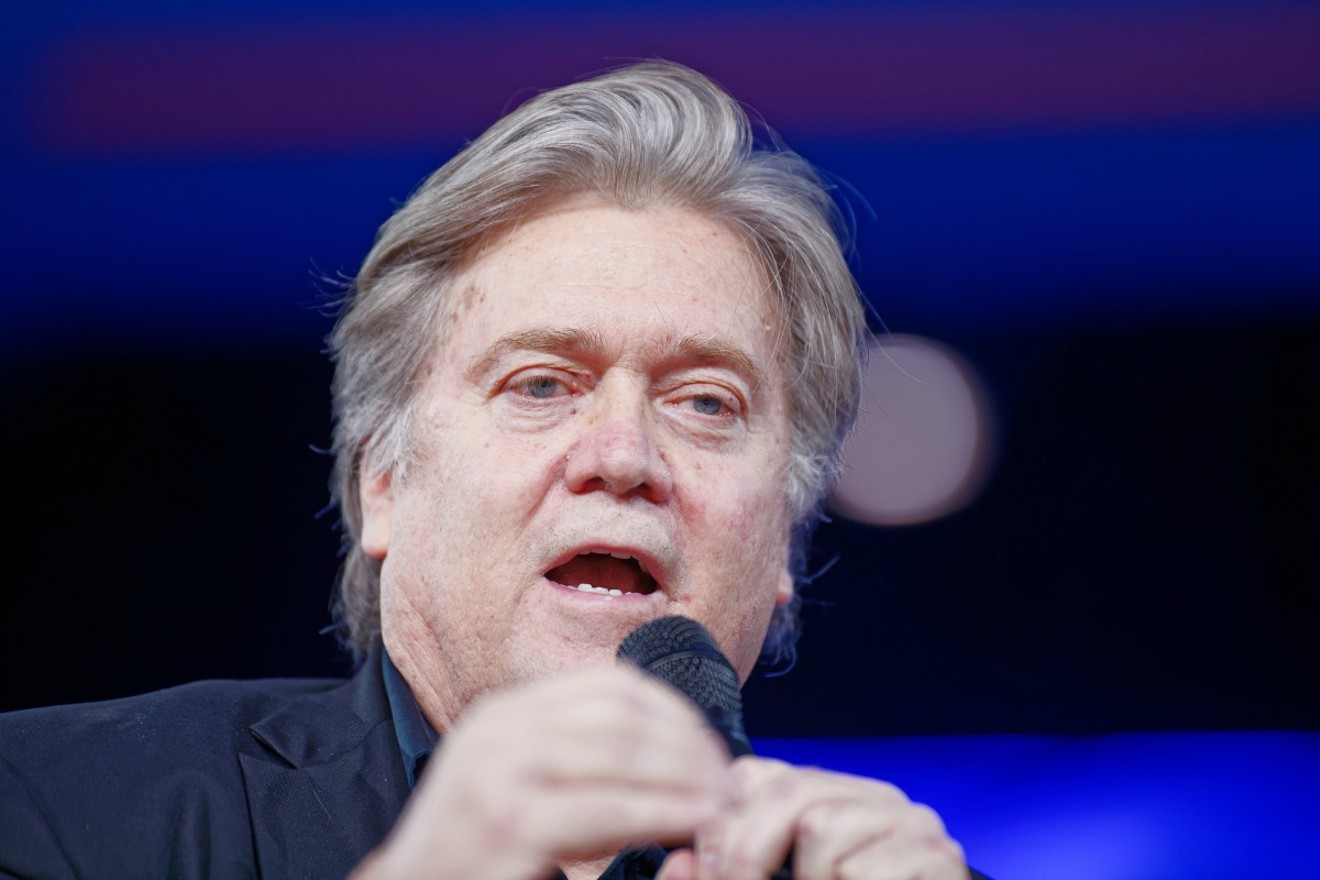 Some came from tenants in distress inside the home. Others were placed by neighbors concerned about loud arguing. All reflect back on White House chief strategist Steve Bannon, who rented the house for his most recent ex-wife in 2015 and 2016.

Police reports obtained this week by New Times, which show calls for everything from domestic violence to a stolen gun, are just the latest revelation of Bannon's odd Miami connection. The über-powerful Trump adviser has had a presence here since 2013, when he first rented a home on Opechee Drive for his ex, former Irish model Diane Clohesy. The new records come from a second house, on Onaway Drive, that Bannon rented for Clohesy when the first lease came to an end. Neighbors say Bannon never resided at either home despite listing the addresses as his residence on a voter registration form.

The new records cast more light on Clohesy's turbulent life in South Florida, where she struggled with drug addiction and alcohol abuse. Neighbors and a former housemate tell New Times the police reports are an accurate reflection of a truly dysfunctional household.

"That lady is crazy," one of Clohesy's ex-roommates says. "I'm scared of these people."

Though many of the police calls were in reference to Clohesy's roommates, Clohesy called police on at least two occasions. In one instance, she reported a possible break-in at the Onaway Drive home, where she said she heard footsteps at the door and believed someone was trying to hurt her. She placed another call, in December 2015, saying a silver Smith & Wesson revolver had been stolen from her safe.

When cops arrived at the home to investigate, Clohesy told them she suspected her two housemates had taken the weapon. Reports say she was unable to provide proof of ownership yet rattled off the gun's serial number by memory. To this day, the revolver remains on a state list of stolen weapons. 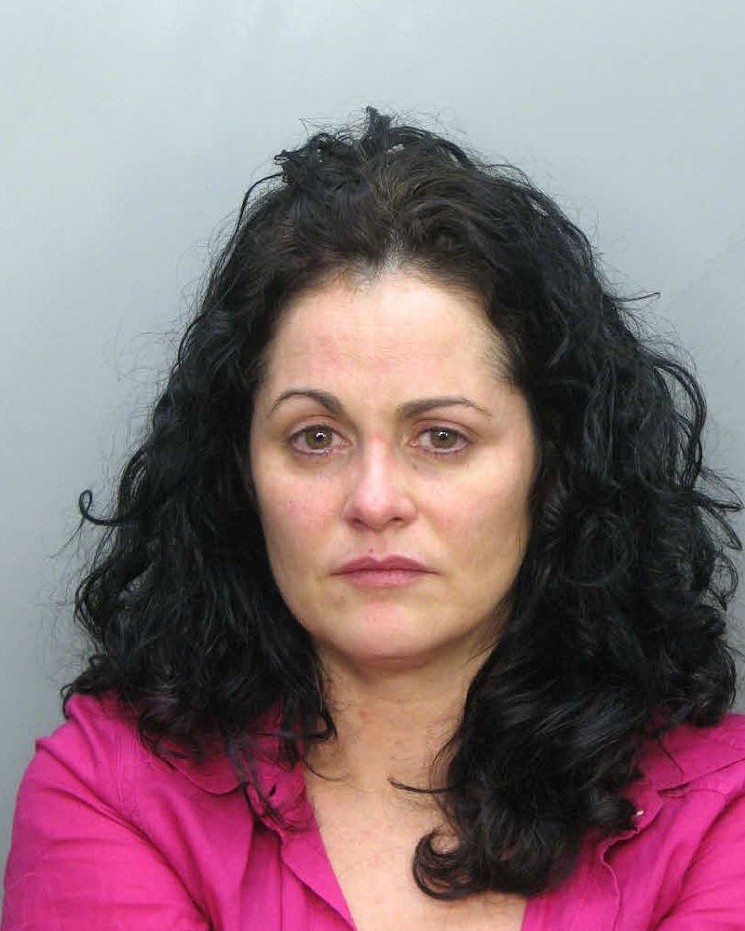 Diane Clohesy was married to Steve Bannon from 2006 to 2009.
via Miami-Dade Corrections
Clohesy first came to Florida sometime before she and Bannon, the white nationalist former editor of Breitbart News, divorced in California in 2009. The terms of their settlement have not been disclosed, but for some reason, he continued to pay for her housing after their split. The couple first cosigned a lease in Miami in February 2013, agreeing to occupy a three-bedroom home on Opechee Drive for two years.

Clohesy's exploits while living at the home were reported earlier this year by New Times and in further detail this past weekend by the Washington Post. After avoiding prosecution for attempting to smuggle marijuana and a cell phone to a Miami-Dade inmate, Clohesy apparently left the rental house in disrepair, causing $14,000 worth of visible and puzzling damage. When the couple's landlord discovered interior doors had been ripped off their hinges and a hot tub had seemingly been covered in acid, Bannon forfeited a $9,800 security deposit and moved his third ex-wife into the second rental home in the Grove.

According to neighbors, Clohesy moved into the house on Onaway Drive in early 2015, around the time Bannon began water and sewer service at the home. That June, she began subleasing a backyard guest cottage to a woman.

The new records show police began making frequent trips to the home just a week after Clohesy's tenant, a 41-year-old cook named Mercedes Negrete, moved in. On June 25, Negrete called Miami Police to report she'd been attacked by her longtime girlfriend after returning to the house with Clohesy following a Walmart run. When officers arrived, they found Negrete with fresh injuries to her elbows, knees, and forehead, according to an incident report. Negrete's girlfriend was arrested on a misdemeanor battery charge and released on a $1,500 bond.

The following evening, Negrete contacted police again, saying she had seen her girlfriend driving past the home she shared with Clohesy, potentially in violation of a no-contact order. At a Miami Police Department substation, Negrete sat with an investigator to file a report, but she left abruptly when one of his questions — whether the other woman had a key to the home — apparently rubbed her the wrong way.

"She demanded her license, assured me her lawyer knew who I was, informed me that I would be on TV, and stormed out of the station refusing any other contact with me," Officer Steven Johnson wrote in an incident report at the time. The girlfriend's battery charge was ultimately dismissed.

The Onaway Drive home rented by Steve Bannon and his ex-wife Diane Clohesy in 2015.
via Google Earth
Bannon apparently never lived at the house on Onaway Drive, but Negrete's girlfriend, who asked not to be named for fear of reprisal, tells New Times he was an active part of Clohesy's chaotic life. The woman, who lived with her partner in the cottage for about six months, says Bannon would take his ex-wife shoe shopping or stock her refrigerator with groceries while he was in town. Although they had been separated for years, she says, Bannon and Clohesy spoke daily because they worked together on films and other professional projects.

"He would call every day, and she had to be available for that phone call," the woman says. "He came to sleep, to be there, to see how the house was, to buy the groceries. He'd do his thing, and she'd do hers."

Bannon and his ex by all accounts got along fine, but trouble was brewing between Clohesy and her roommate. Just two months after Negrete moved in, officers were dispatched to investigate a domestic dispute between the two. Although it's not clear from reports which one called for help, notes from the call show that one of the women was accused of choking the other. Upon arrival, officers learned the two had been arguing about Negrete's pet bird when asked her to leave the home. Negrete drove off with her belongings while police were still at the scene. Neither woman was arrested in the incident.

Although no reports were taken, call logs show police investigated at least four other disturbances at the home before Clohesy moved out and Bannon shut the water off in March 2016. It's unclear if Clohesy remains in Miami; her brother Declan told the Post earlier this month that she "was recently institutionalized."

The home on Onaway Drive has since been knocked down. For neighbors, the demolition has been a headache and an eyesore but still an improvement over the problems from the time Clohesy and Bannon rented the home. Longtime residents tell New Times they won't miss the loud arguments coming from the house or the constant parade of cars pulling into the driveway at all hours of the night. A collapsible carport that kept falling over was a particular point of contention.

"It was horrible-looking," one neighbor recalls.

Though she never saw anything that led her to believe the relationship between Bannon and his ex-wife was toxic, Negrete's girlfriend says she questioned why the two continued to have such a close bond post-divorce.

"For a man to maintain a woman the way she was kept, there had to be something in the closet," the woman says. "Would you maintain a woman who wasn't worth it, wasn't the mother of your child, who was into crystal meth, in a mansion in Coconut Grove?"

Although she found the arrangement strange, the woman says Clohesy always spoke well of her ex-husband. Bannon, now 63, hasn't remarried, and in Clohesy's eyes, that apparently meant something.

"She'd say, 'That's my ex-husband,' but to her, that's still her husband," Negrete's girlfriend says. "To her, she was the last woman in his life."