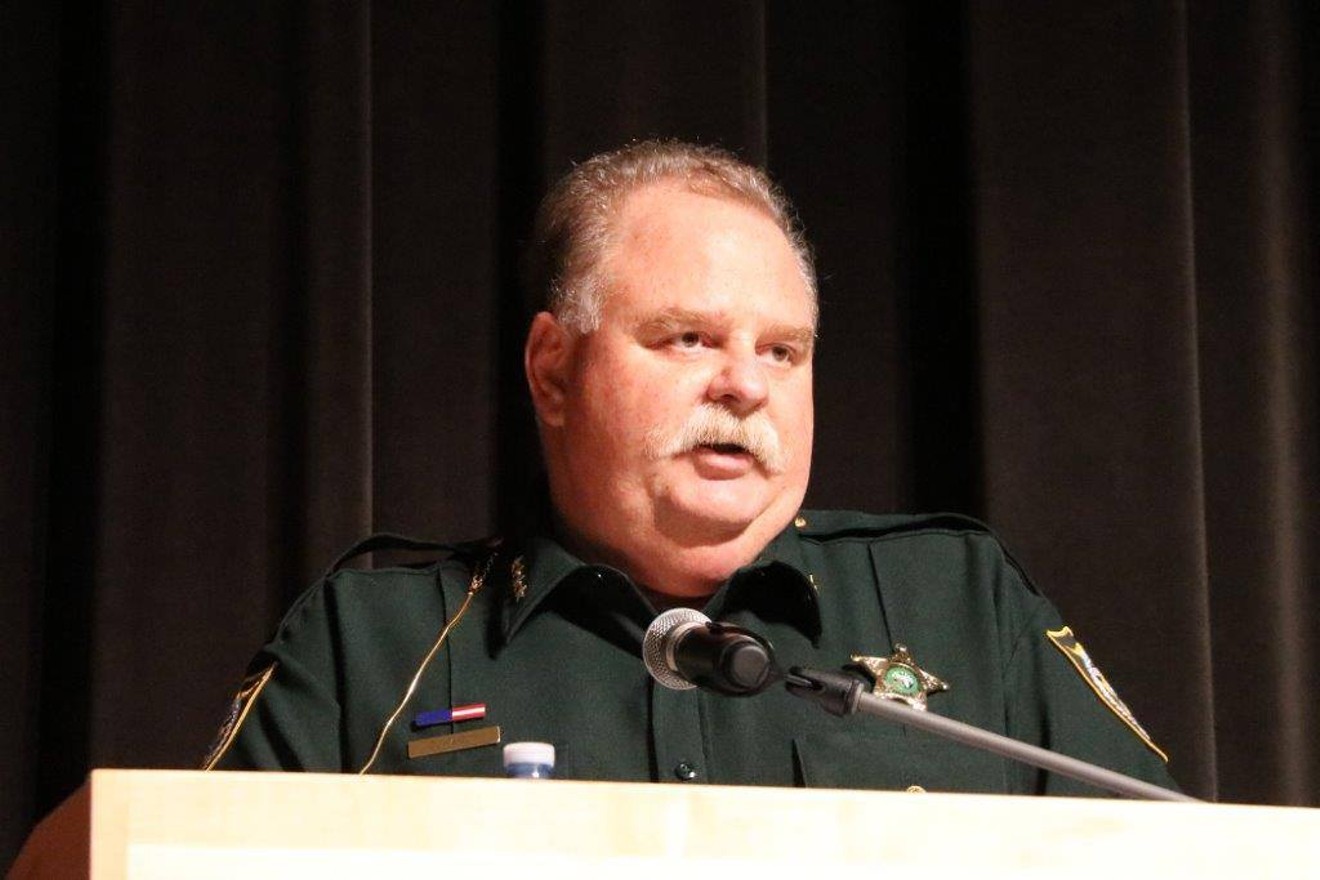 Glades County Sheriff David Hardin Glades County Sheriff's Office
When 92 Somali detainees were flown from Louisiana to Dakar, Senegal, and then inexplicably taken to Miami at the end of 2017, immigration lawyers representing the group were particularly worried about one thing: While some of the detainees were being held at Immigration and Customs Enforcement's Krome Processing Center in West Miami-Dade County, others were shipped slightly north, to the Glades County Detention Center west of Lake Okeechobee. Though staying at Krome is far from a cakewalk (New Times uncovered shocking allegations of abuse there in 2015), Lisa Lehner, a lawyer for Americans for Immigrant Justice, told New Times earlier this year that conditions at the Glades facility are worse. Many Somali detainees at the facility were being abused, denied medical care for gruesome injuries, and pepper-sprayed.

Now, in a disturbing letter sent to Glades County Sheriff David Hardin, who runs the jail, and Miami's ICE office, immigration and civil rights lawyers contend that Muslim detainees at Glades are being forcibly prevented from observing Ramadan. The legal advocates say this treatment is a violation of the detainees' human rights.

"All of us are guaranteed the freedom to worship, but GCDC is denying that basic right to the people in their custody,” Yusuf Saei, a lawyer working with the civil rights group Muslim Advocates, said today in a news release. “People who are incarcerated at GCDC have the right to observe Ramadan, and the detention center must act immediately to rectify these violations.”

The seven-page letter, addressed to both Sheriff Hardin and Miami's Assistant Field Office Director Juan Acosta, says that although the facility maintains a so-called Ramadan list of detainees who observe the Islamic rite, at least two men have been "arbitrarily denied" being added to the list. More troubling, the lawyers say people on the list are treated even worse: Some men are (1) forced to eat leftover meals that have been sitting out for as long as eight hours at a time,( 2) denied halal food, (3) prevented from praying five times a day, and (4) denied access to the Koran. Lehner, the aforementioned lawyer from Americans for Immigrant Justice, also signed the letter.

The lawyers say some men wearing Muslim kufis have had the caps forcibly knocked off their heads. One man even says he was sent to solitary confinement for wearing a kufi.

On behalf of Americans for Immigrant Justice and Muslim Advocates, we write to bring to your attention violations of the religious free exercise rights of several Muslim men currently detained at the Glades County Detention Center (“GCDC”). Specifically, employees of the Glades County Sheriff’s Office working at GCDC have unreasonably hindered individuals from observing the holy month of Ramadan by denying them access to the Ramadan list and by also providing inedible and insufficient quantities of food to those who fast. Moreover, there are a number of other GCDC policies and practices—including lack of access to halal meals and frequent cancellations of weekly congregational prayer services—that prevent Muslim men detained in the facility from practicing their faith. These actions by Glade County Sheriff’s Office employees and other GCDC staff are in clear violation of federal and state law.


The facility houses both Glades County criminal inmates and immigration detainees held on ICE's behalf, who may not have even been convicted of crimes. (Immigration violations, such as visa overstays, are civil infractions similar to traffic tickets.) ICE ships detainees to the facility from all over Florida — and, in the case of the Somali detainees, from other parts of the country too.

Hardin and spokespeople for the Glades County Sheriff's Office did not immediately respond to messages from New Times today. A spokesperson for ICE's Miami office, Nestor Yglesias, said via email that "accusations of misconduct involving agency employees and... contractors are taken seriously and will be investigated thoroughly. Should these allegations be substantiated, appropriate action will be taken. ICE employees and contractors are held to the highest standard of professional and ethical conduct.”

Sheriff Hardin has previously made glowing comments about both ICE and the Trump administration. According to the hometown Okeechobee News, the entire facility was nearly forced to shut down in 2015 because it wasn't receiving enough federal prisoners. ICE and the Trump administration have instead revived the jail: Hardin told the newspaper in March 2017 that President Trump's executive orders giving ICE more leeway to detain people have sparked a huge uptick in business at his facility. (According to ICE's arrest figures, Florida saw the largest spike in ICE arrests nationwide from 2016 to 2017.)

"President Trump... put people back to work," Hardin told the newspaper. "What that means, they are picking up more illegal aliens." He also added that he was "happy with the progress."

But that "progress" has also included accusations of horrid abuse at the jail during the Trump era. Lawyers  (including Lehner) for the aforementioned Somali detainees filed legal petitions and sent letters to politicians earlier this year detailing what they say is abuse: The detainees claim Glades County guards are denying detainees medical care, subjecting them to racial slurs including the N-word, illegally throwing men into solitary confinement, and even excessively pepper-spraying people who've asked for simple items. Detainees say they've been left bruised and bleeding in their cells, pepper-sprayed so much they've vomited, and been denied care for ailments including broken bones. One man said that after guards pepper-sprayed him, he was denied a shower for two days and forced to live with stinging, irritated skin.

"Quite frankly, if these circumstances existed in another country, the Glades County Detention Center would be on a 'watch-list' for humanitarian rights organizations, and yet, this is occurring in your district," the letter read.

Now, with only eight days left of the holy month of Ramadan, lawyers for the Muslim detainees are demanding the guards provide hot halal food for detainees and stop abusing them for no reason. Muslims celebrate the end of Ramadan with the Eid al-Fitr holiday — the lawyers are also asking the prison to prepare food for that event too.

The letter notes that Christian detainees have not been treated with the same level of cruelty. But the lawyers say that when Muslim detainees have asked for help, guards often respond with one sentence: "This is Glades County."
KEEP MIAMI NEW TIMES FREE... Since we started Miami New Times, it has been defined as the free, independent voice of Miami, and we'd like to keep it that way. With local media under siege, it's more important than ever for us to rally support behind funding our local journalism. You can help by participating in our "I Support" program, allowing us to keep offering readers access to our incisive coverage of local news, food and culture with no paywalls.
Make a one-time donation today for as little as $1.