Update 9/8: GoFundMe spokesman Bobby Whithorne says the online platform has established a separate link at gofundme.com/Irma for all verified fundraisers. His statement to New Times has been posted below.

Hurricane Irma is still a few days away from making landfall in Florida, but plenty of meteorologists are already predicting the worst. If the Category 5 storm does hit Miami directly, as some models anticipate, the damage could be astounding. One estimate says the tab could reach as high as $300 billion.

With all of that destruction, there would be plenty of need for charitable donations. But as Miami and the rest of Florida  for a hit, scammers are already positioning themselves for a piece of the pie. Over the past couple of days, hundreds of sketchy crowdfunding pages have cropped up from anonymous users hoping to cash in big on the pending disaster.

On GoFundMe, a page purporting to be from singer Jason Derulo has set a fundraising goal of $1 million for Irma victims.

"Hey Guys it's Jason Derulo, I'm here using my platform to help raise money for Hurricane Irma," the page says. " [sic] devastating what mother nature is doing to us right now, but we cannot question God only answer his calling. Which right now is to pray and donate if you can." (The real Derulo hasn't posted about the fundraiser from any of his social media accounts, so it's extremely unlikely he's behind the account.)
click to enlarge 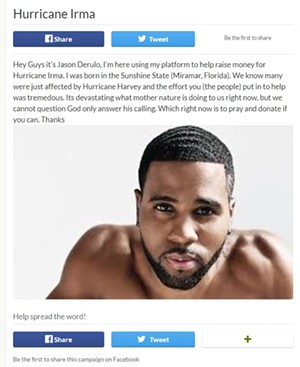 
Another page supposedly set up from Miami Beach says it hopes to raise up to $25,000 for hurricane relief on behalf of something called the Direct Impact Fund, which is described as "an independent, registered 501(c)(3) non-profit organization, to deliver tax-deductible donations to support Hurricane IRMA victims." But according to state business records, no such organization exists.

While some online fundraisers are obvious scams, others are more difficult to verify. New Times emailed ten people who have created faceless accounts on GoFundMe for Hurricane Irma to ask exactly how the money would be spent and how the organizer would account for his or her expenditures. Not one of them has emailed back.

Fundraising scams have already been milking people in Texas after Hurricane Harvey; the attorney general there has warned people not to donate to unfamiliar organizations or people. The attorneys general in Michigan, Arizona, Colorado, Ohio, Kentucky, and California have issued similar warnings.

Thankfully, GoFundMe has a policy of returning donors' money if fundraising pages are shown to be fake. See a suspicious page? The site has a button you can click to report a campaign, or you can file a complaint with the Florida attorney general at 1-866-9-NO-SCAM or myfloridalegal.com.

All donors and campaign organizers should feel confident in making a donation on GoFundMe. GoFundMe is the safest place to give and users are fully protected by the GoFundMe Guarantee (refund policy). GoFundMe created a central hub for verified GoFundMe campaigns: www.gofundme.com/Irma.

If a donor has a question or wants to know more about a campaign before they donate, they can reach out to our team or the Campaign Organizer directly through the GoFundMe page.

Here is a Medium post we posted about our safety measures to protect donors during the recovery:
https://medium.com/giving-matters-notes-from-gofundme/preparing-for-hurricane-irma-d9741ecd2bb9

One of the main points we stressed is the fact that GoFundMe has the ability to transfer funds directly to those in need. When a campaign is created to help another person or family, the funds are collected, held, and then transferred directly to the beneficiary of the GoFundMe rather than to the campaign organizer. That’s just one of the many ways we secure the platform and make sure the money quickly gets to the right party.

Our team is providing around-the-clock support. We will continue to stay in close touch with all organizers and beneficiaries to ensure the resources get to people in need as soon as possible.