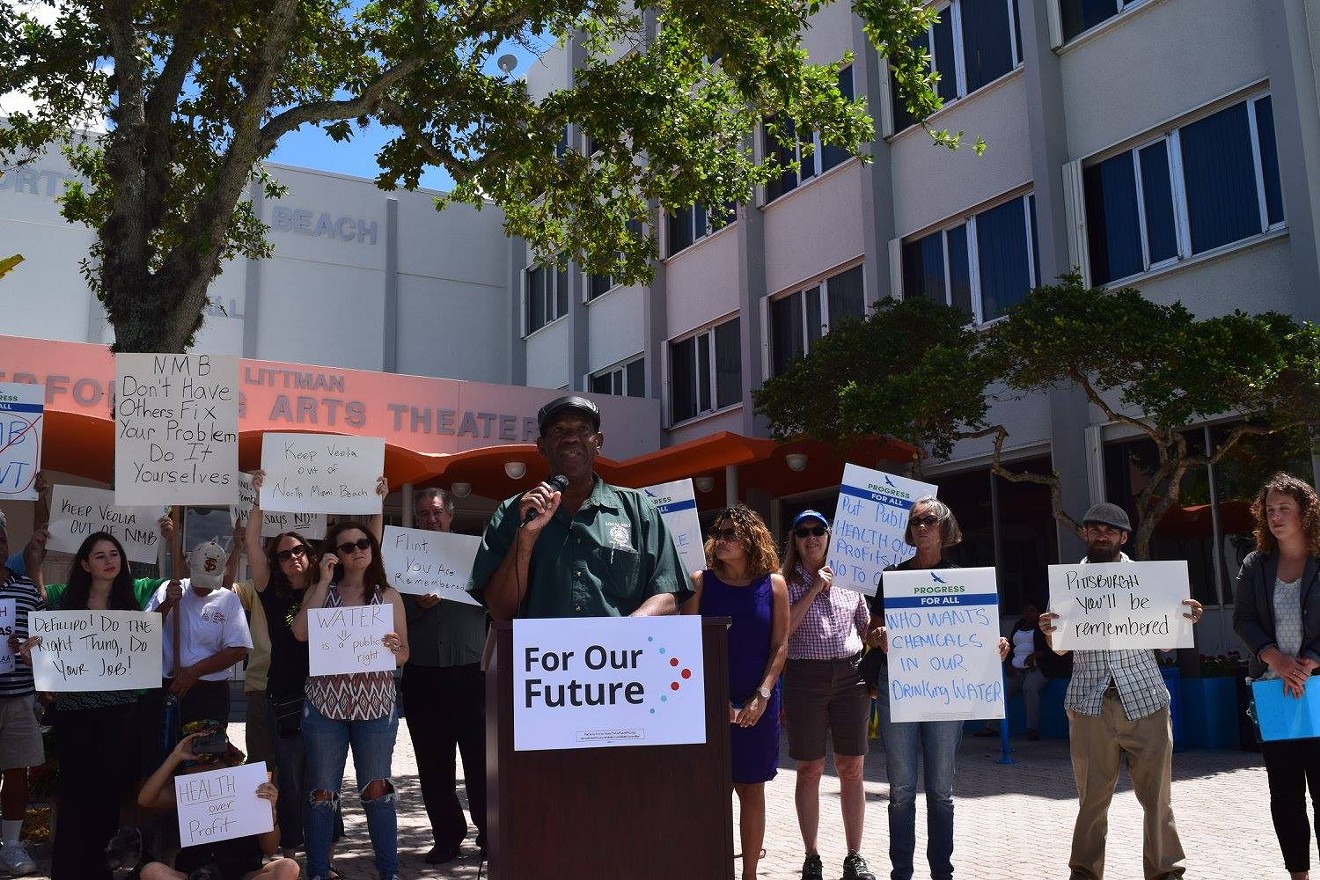 Courtesy of AFSCME Florida
On April 3, the City of North Miami Beach began negotiating with a global engineering firm to take over the city's water utility, which services close to 200,000 people in North Miami-Dade. Clean-water activists vehemently opposed the move, citing research that water utilities run by private companies tend to get much more expensive over time and typically provide services at "cheaper" rates by cutting staff or services.

Plus, New Times confirmed the FBI had been interviewing people about the deal as part of an apparent government corruption probe, which closed in February.

But those facts have not mattered to North Miami Beach's elected officials. Tomorrow the city commission will vote on whether to hand the utility's operations over to CH2M Hill Engineering for an annual fee of $18.8 million per year. (The city would retain ownership of the utility, but CH2M would handle the plant's day-to-day operations. The city would also pay CH2M $19.3 million in the first year to cover startup costs.)

There are genuine questions as to whether the bidding process was carried out fairly. Last October, a CH2M subsidiary was awarded an emergency contract to take over some plant operations in a hushed, no-bid deal. The next month, the city sent out its request for qualifications for a company to take over the entire plant — and CH2M was ranked the most qualified company. The firm is now in line for a fat city contract paid out with taxpayer dollars, while questions over the deal's safety, financial prudence, and a possible criminal probe remain.

"I want to reiterate that the City of North Miami Beach remains in full ownership and control of our Water Utility," City Manager Ana M. Garcia wrote in a memorandum that will be presented to the commission Tuesday. "Our Public Utilities Committee (PUC) will continue to recommend the Water Rates that will be set by our Mayor and Commissioners. The City’s Utilities Director Jeffrey Thompson PE will maintain oversight over CH2M."

The city contends that its water utility — which also provides water to Sunny Isles Beach, Aventura, and Miami Gardens in addition to North Miami Beach — is a rundown mess and that hiring a private company to take over the plant and overhaul the facility is cheaper than having the city do so itself. But during the April 3 city commission meeting when negotiations were authorized with CH2M, multiple utility employees accused the city government of intentionally underfunding the utility in order to come up with an excuse to privatize it.

New documents claim the city will save roughly $3.5 million a year — totaling $56 million over 15 years — if the plant is handled by CH2M. But former water plant employees in front of the commission dais last April questioned if the city's figures were accurate.

Likewise, an avalanche of research warns that privatizing one's water system is rarely, if ever, cheaper in the long haul. The nonprofit Food and Water Watch warns that rates in the ten largest cities with private water facilities tripled after privatization. Likewise, rates with private firms tend to increase three times faster than the rate of inflation, and corporate profits, dividends, and income taxes can add 20 to 30 percent to utility maintenance costs. Since 2010, the number of municipalities trying to buy their water plants back from private firms has rapidly increased.

North Miami Beach says any rate increases must first be approved by the city. Though this is true, regulatory oversight from similar boards across both Florida and the nation tends to be lax, and utilities that ask for rate hikes in Florida tend to get what they want. (See: Florida Power & Light.)

The utility workers' union, the American Federation of State and County Municipal Employees, warned that up to 80 plant workers could be affected by the privatization deal. The city's new agreement with CH2M does state that all union workers who pass physicals and drug tests will be rehired by CH2M at their current rate of pay. But there are concerns that simply rehiring the workers won't be enough to keep their jobs safe for long. The union does not have an active contract with the city, which means CH2M could choose to slash wages, benefits, or jobs in the near future if it wants to cut costs quickly.

In fact, the new documents bragging about the deal's money-saving measures include projected cuts to "staffing costs," as well as "labor savings of $2.4 million starting in year two." The report says CH2M's labor will cost $2.2 million less than what the city could afford on its own. It's not immediately clear where those cuts would be made.

There are also questions as to whether cities that privatize their utilities give up critical oversight of their own drinking water. Veolia, one of the other private companies that bid on North Miami Beach's contract, has been accused of causing a massive lead crisis in Pittsburgh. The Veolia-run water utility there pumped a new, cheaper chemical through the city's old pipe system, only to find out that chemical eroded the lead from the pipes. More than 80,000 households lost access to safe drinking water.

CH2M has its own serious problems elsewhere around the world. The firm is the program manager for the 2022 FIFA World Cup construction site in Qatar. Amnesty International has accused the people running the construction project of exploiting migrant workers, forcing them to live in squalor in near-slave conditions, and lying about their salaries or refusing to pay workers altogether. In 2013, the International Trade Union Confederation warned that the construction practices in place at the time could "claim the lives of 4,000 migrant workers," and a separate think tank called on CH2M to do something about the appalling conditions.

“As we do in all areas of our operations we will conduct ourselves and deliver our work as a company that is committed to ethics and social responsibility," a CH2M spokesperson responded.