North Miami Beach Mayor George Vallejo via Twitter
North Miami Beach Mayor George Vallejo pleaded guilty in April to a raft of campaign-finance violations, including diverting at least $5,000 in campaign money to shell corporations he and his family used to pay off personal expenses. Vallejo, age 51, stepped down as mayor and received three months of house arrest plus probation.

But in a previously unreported deposition obtained by New Times, Vallejo admitted to perhaps an even greater ethical violation: He said in a sworn statement that, for virtually the entirety of his time in office, his wife was quietly employed by the infamous, Trump-tied Dezer family, who are among the city's most prominent developers. Vallejo told attorneys in an April 5 interview that he and his wife created two shell companies, including one LLC headquartered in Wyoming, to hide the payments from the public. While his wife was taking publicly undisclosed payments from the Dezers, Vallejo voted on issues related to Dezer properties.

"I wanted something that not everybody could sit there and look [it] up... and be all up in our business," Vallejo told investigators probing the Wyoming LLC.

Reached by phone, Michael Dezer asked New Times to send him questions in writing. He did not immediately respond to a follow-up email. 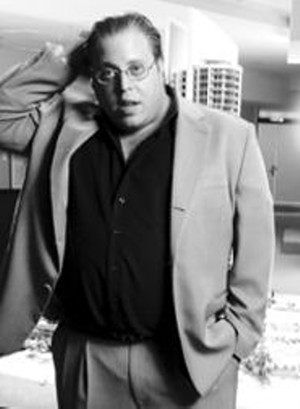 Gil Dezer posing for New Times in 2004.
Jonathan Postal
The billionaire Dezers — headed by father Michael and son Gil — have a long history in South Florida real estate. In the '80s, they teamed up with Donald Trump to build multiple Trump-branded properties. Gil Dezer is a noted friend and fan of Trump's. He told Bloomberg he was so enamored with the president's memoir, The Art of the Deal, that he wrote a book report on it when he was in high school. In 2017, Brazilian authorities launched a money-laundering probe tied to the Porsche Design Tower, a recently built luxury Dezer complex in Sunny Isles Beach. (The Dezers themselves are not targets in that criminal probe.)

Vallejo's statements raise new questions about the billionaire family's influence over South Florida politics. In 2015, the City of North Miami Beach unanimously passed sweeping zoning changes that benefited the Dezers, who own most of the Intracoastal Mall property and hope to redevelop the site into a mixed-use complex with shopping areas and thousands of living spaces.

"Our city had been held back for years by people who will come up and complain about any change,” Vallejo said from the dais.

Vallejo told investigators this year that his wife was getting paid by the Dezers at the time.

The City of North Miami Beach, a community of 44,000 people, has basically been one walking ethics violation for much of the past decade. Vallejo was the second consecutive mayor indicted on corruption charges. (Myron Rosner was charged after leaving office.) A 2017 deal to sell off the city's public water utility to private managers resulted in a brief FBI investigation. Another city commissioner, Frantz Pierre, was recently found guilty of ethics violations for a 2015 incident and was briefly removed from office this year for missing too many meetings. (Pierre blamed the absences on a health issue and says he was railroaded off the dais by political enemies, but he remains under a public corruption investigation for a different matter.)

But Vallejo's April deposition paints a picture of a city strongly influenced by the Dezer family's billions. Vallejo told Miami-Dade State Attorney Katherine Fernandez Rundle's investigators the Dezers hired his wife as an employee at their Dezer Auto Museum just off Biscayne Boulevard. As of the April 5 deposition, Vallejo said his wife was still working for the Dezers.

Vallejo said his family set up two accounts to stash the payments: one called "JATC" and another named "Creations Unlimited." Vallejo said the companies were created to receive payments from the Dezers to his wife — the latter was based in Wyoming. Prosecutors said the Dezers were paying JATC at least $5,000 per month.

(JATC and Creations Unlimited were also the two shell-corporations Vallejo said he used to funnel away campaign money.)

At one point in the interview, investigators asked why Vallejo never disclosed that while he was campaigning to help the Dezers redevelop the Intracoastal Mall, his wife was also taking payments from the real-estate magnates.

"Have you ever told the commission or the taxpayers, or disclosed at the same time that you were pulling for that [project], that you were taking money from the Dezers through all these things that you didn't want , through JATC and all that?" a prosecutor asked the mayor. "Do you think that's something that people would be interested in, that you're paying your personal expenses with part of their money?"

Vallejo responded that he didn't think there was anything unethical about that situation. Later in the deposition, investigators again asked him if he thought the payment scheme was on the up-and-up.

STATE ATTORNEY'S OFFICE: "You didn't see any conflict that was coming up? By her working —"

VALLEJO: "You know what, I — I actually looked up, myself, in the actual Dade County Commission on Ethics stuff, and I couldn't — I don't know, maybe I'm reading it wrong, but I could not find where there was a conflict."

SAO: "Well, had you written...I'm thinking about opening up a Wyoming corporation and a corporation here and I want to wash this money through two different corporations.' What kind of answer do you think you'd get to that?"

Prosecutors also say that, right when the Dezers began paying Vallejo's wife, they also struck up a "consulting" deal with Donner and Cayard, who used a company called "Caydon" (likely a portmanteau of their last names) to receive the funds. (Cayard, an infamous political figure in Miami's Haitian community, was arrested in 2008 on racketeering charges, but they were dropped after he entered a pretrial diversion program.) Vallejo said Cayard was brought in to help persuade the city's Haitian-American community to support the Dezer family's development ideas. Vallejo also told the State Attorney's Office that Donner was paying for the mayor's subscription to an email-blast/campaign data service used for campaigning while he was in office.

Reached via phone, Donner denied he or Cayard had any knowledge of the Dezer family's payments to Vallejo's wife. He said the Dezers simply hired the two men as lobbyists on the Intracoastal Mall rezoning project and were quickly let go once the zoning changes were approved in 2015. Donner said the "payments" for the email-blast/campaign data program were just $80 per month and were an essential tool his political action committee needed.

"Half of what George did was just silly," Donner said of Vallejo's campaign-finance violations. "What I counseled George on was how to stay in compliance with the laws. Compliance is not that hard. But unfortunately, George did not do that."


The truth will come out when the process is complete. The investigation has our full cooperation. #IamNMB #NMB pic.twitter.com/DKOiCLdhnj

Vallejo admitted to investigators that money donated to some of his political action committees was spent on groceries, clothing, personal items, and even a bat while Vallejo and his son were at a baseball tournament in Sarasota.
KEEP MIAMI NEW TIMES FREE... Since we started Miami New Times, it has been defined as the free, independent voice of Miami, and we'd like to keep it that way. With local media under siege, it's more important than ever for us to rally support behind funding our local journalism. You can help by participating in our "I Support" program, allowing us to keep offering readers access to our incisive coverage of local news, food and culture with no paywalls.
Make a one-time donation today for as little as $1.