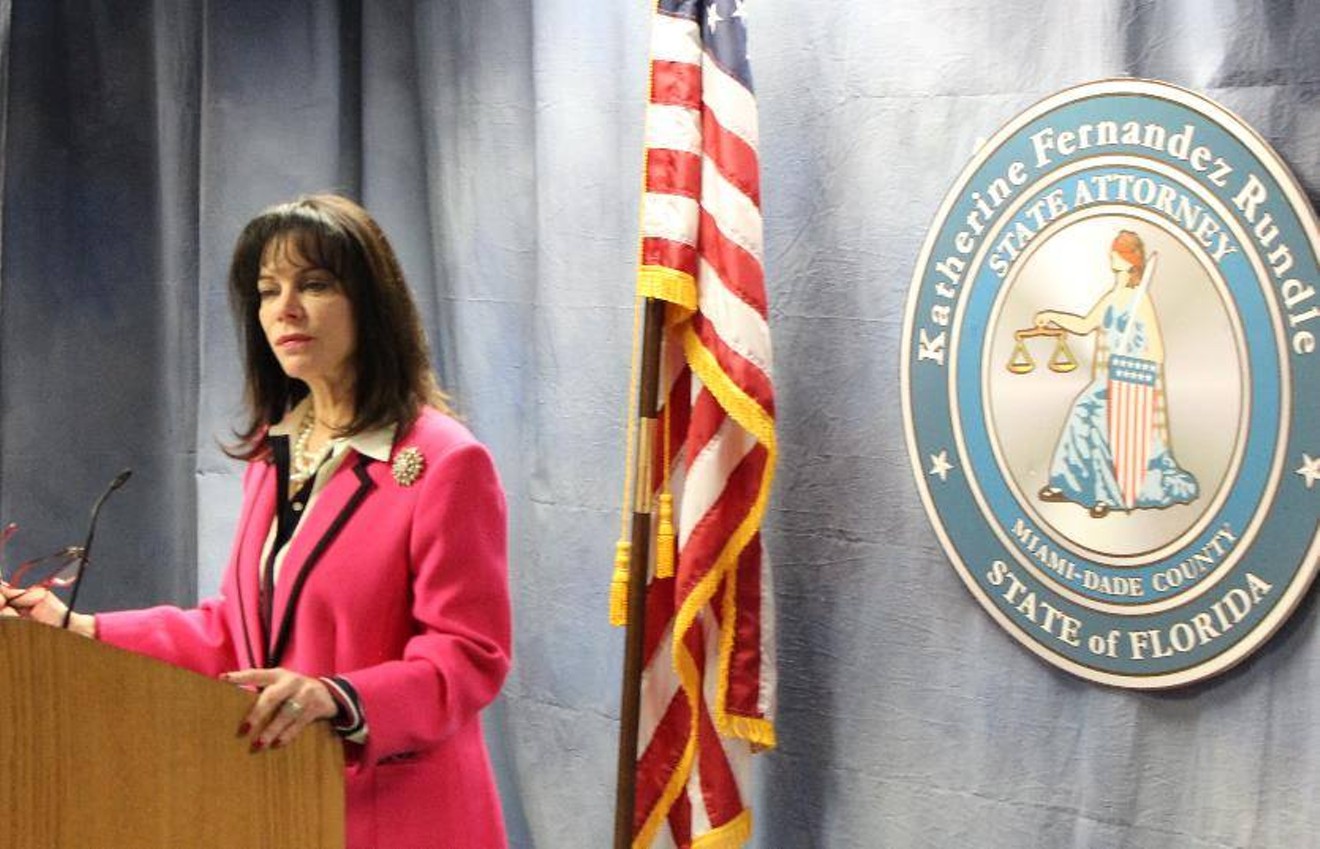 Katherine Fernandez Rundle Miami-Dade County State Attorney's Office
"Excited delirium" is not an officially recognized medical condition. The term was invented in Miami to describe why so many and crack addicts were dying in the city's streets during the 1980s, but many medical experts say the condition — when someone's brain basically short-circuits due to a combination of drugs and stress — was simply invented to help cover up police officers in misconduct cases. The company that manufactures the Taser even pays the University of Miami's top excited delirium researcher.

But in a case the Miami Herald first reported earlier today, Miami-Dade State Attorney Katherine Fernandez Rundle cited the condition to clear a group of ten Coral Gables Police officers involved in the surreal death of Aviel Gutierrez, who died in police custody in 2016 after being repeatedly tasered by Gables cops.

"The use of a Taser was reasonable under the circumstances and there were no life-threatening injuries caused by any of the police officers in lawfully detaining and arresting Mr. Gutierrez," the close-out memo from Rundle's office says. "Based on the autopsy report prepared by Dr. Hutchins and upon Mr. Gutierrez's extremely erratic behavior at the scene, Mr. Gutierrez died from drug-induced delirium and not from police misconduct."

(For what it's worth, some legitimate medical groups — like the National Association of Medical Examiners — do believe excited delirium is a real syndrome, and some emergency-room doctors say they see signs of delirium in patients on a somewhat regular basis.)

"It's overused by medical examiners across the country to hide brutal murders by law enforcement," Ronald J. Kurpiers, an attorney who once challenged the diagnosis in a U.S. Supreme Court lawsuit against West Palm Beach Police officers, told New Times in 2010. "It's bullshit."

It's worth noting that Rundle has been Miami-Dade's top prosecutor for 25 years and has never charged an on-duty officer for killing someone. This also marks another case where Rundle's prosecutors have leaned on a questionable report from a county medical examiner. When Rundle cleared the officers accused of scalding mentally ill inmate Darren Rainey to death with boiling water in 2017, Rundle cited a medical examiner's report that said there were "no burns" on Rainey's body after he died. The Herald subsequently poked a laundry list of holes in that autopsy report. The paper also obtained gruesome photographs that sure seem to suggest that Rainey was burned.

It is clear that in Gutierrez's case, police needed to subdue the man somehow. Police say Gutierrez was attacking his girlfriend because he believed she had become possessed by "evil spirits." Video evidence taken from a security camera at the nearby Big Game Liquors shows Gutierrez pulled his dark-colored BMW to the side of the road near 930 LeJeune Rd. and began attacking his girlfriend, who was wearing only a towel. He kept ripping the towel off her body.

The Herald obtained video that shows the officers repeatedly tried to force Gutierrez to the ground, but the 38-year-old former pest-control worker continued fighting the cops and trying to get his hands on his girlfriend. At one point in the clip, he fought off multiple officers and ripped the towel off his girlfriend once more. Eventually, a group of officers encircled Gutierrez and unloaded their Tasers on him:
Gutierrez later died in police custody, and questions now remain as to what exactly killed him. Coral Gables Police initially refused to release reports to the Herald when reporter David Ovalle began writing about the case last year. Now that the information is out, the excited delirium verdict deserves more scrutiny.

According to the close-out memorandum, Miami-Dade Fire Rescue personnel arrived at 1:58 a.m., just after Gutierrez had been tasered. Paramedics administered midazolam, a benzodiazepine sedative, at 2:05 a.m. because Gutierrez continued to act "erratically." He had a heart attack ten minutes later and was pronounced dead at a hospital at 3:08 a.m.

"At the hospital, Mr. Gutierrez was observed with two electronic control device prongs on the left side of his back," the close-out reads.

The medical examiner's report shows Gutierrez was not suffering from any other underlying conditions. According to the report, Gutierrez was an "otherwise healthy 38-year-old" who had not been beaten, strangled, or trampled to death by the officers. But the medical examiner ruled out death by Taser, claiming the devices can kill only if the prongs are shot close to or directly into the heart.

The report instead says decreased dopamine levels in his brain and "elevated heat-shock protein levels" were "consistent with that found in cases of drug-induced excited delirium."

The only problem, of course, is there is no official medical definition of excited delirium to point back to — it's not a term recognized in any official medical journals. As New Times reporter Gus Garcia-Roberts laid out in a 2010 feature story, the condition seems to arise only when suspects who have huge amounts of cocaine are subsequently tasered by police. By the telling of UM's Deborah Mash — who often testifies in such cases — people's bodies overheat, their brains cook, and they finally die of heart attacks.

Of course, it helps that Axon, the company that manufactures the Taser, routinely pays Mash tens of thousands of dollars to testify in its favor in police-tasering cases across the nation. When teenage graffiti artist Israel Hernandez died in 2013 after Miami Beach Police tasered him, the company rushed to send brain-tissue samples to Mash for testing, according to Reuters. In that instance, the Miami-Dade Medical Examiner's Office said it was clear Hernandez's death was due to the shock the Taser. (There is no evidence that Axon was involved in the investigation surrounding Gutierrez's death.)

Police-misconduct reporter Radley Balko has also convincingly argued that people are not absolved of liability even if "excited delirium" is real. If Tasers are known to cause the condition, police or Axon can still be held responsible for knowingly shocking people into bouts of delirium.

In the vast majority of cases, however, people exhibiting excited delirium died after violent confrontations with cops: In a 2010 review of Miami-Dade deaths due to excited delirium, 28 of 35 suspects died after struggling with police.