via Twitter
Lt. Javier Ortiz, the head of Miami's police union, was briefly removed from street duty earlier this year after he harassed a woman, posted her private phone number online, and earned himself a temporary restraining order that landed him on desk duty and stripped him of his gun. Despite facing next to zero accountability for years of use-of-force lawsuits, allegations of improperly written police reports, and regular racist and Islamophobic bile posted on his social media accounts, it seemed as if the restraining order might finally force Ortiz out of a City of Miami Police uniform earlier this year.

Instead, he not only got his job back but also — at a 10 a.m. ceremony at the James L. Knight Center today — will be promoted to captain.

"Big promotion ceremony tomorrow," police spokesperson Esther Farmer tweeted yesterday. "Congrats to all our superstars." Fellow spokesperson Yelitza Cedano, who herself will be promoted to lieutenant today, tweeted out a list of every officer who will earn honors. Ortiz is the only lieutenant making the jump to captain.

Big promotion ceremony tomorrow. Congrats to all of our superstars https://t.co/jLkZD8NAg7

MPD Chief Rodolfo Llanes did not respond to a message from New Times asking why he signed off on promoting the most controversial cop in Miami-Dade. But Ortiz's promotion is simply a sign that the most rudimentary police-accountability protocols at MPD don't work at all. Ortiz garners so much bad press that many cops in his own union are sick of his conduct, anonymous police forums such as LEO Affairs are full of complaints about Ortiz, and other officers have anonymously complained to New Times over the years about how poorly he paints the force in the media.

In 2015, the Miami Community Police Benevolent Association (MCPBA), the city's oldest black police organization, accused Ortiz of racism. Ortiz yelled at his own superior, Assistant Chief Anita Najiy, a black after she failed to place her hand over her heart during the Pledge of Allegiance; Ortiz demanded she fired and circulated a letter about a "rumor" that she was Muslim. The MCPBA called his comments "hateful" and "racism cloaked in patriotism."

Ortiz has had his hands in so much funny business — including writing allegedly incorrect police reports, insulting dead children, storming city hall and terrifying commissioners, blaming immigrants for crime, and calling Islam a "religion that enslaves and allows the beating of women" — that New Times compiled a 12-part list of his "greatest hits" in March and somehow didn't have the space to cover every shady thing he's done over the years. The fact that publicly harassing a random woman who simply criticized cops didn't cost him his job is astounding.

Ortiz also doesn't seem to like public health all that much: He openly hates the city's needle-exchange program, which gives heroin addicts clean needles to prevent the spread of HIV and hepatitis. 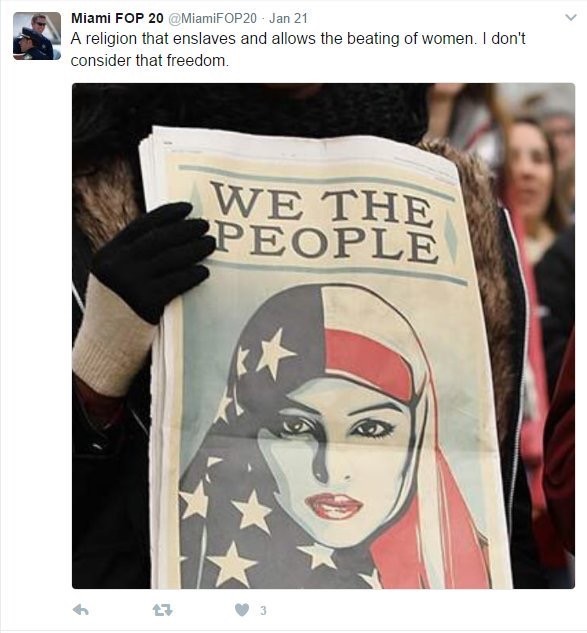 via Twitter
One of his major goals as a union president has been to fight basic departmental oversight: He has fought to strip the city's Civilian Investigative Panel, a citizen-led watchdog that Ortiz's Fraternal Order of Police has basically browbeaten into toothlessness. But Ortiz's promotion technically is supposed to stem from his on-duty work.

The promotion debatably reflects more on Chief Llanes than it does Ortiz. Llanes "retired" in October 2016 but has stayed on as chief and is collecting both his salary and pension in a move informally known as "double-dipping." The move technically does not cost the city any extra money, but it does saddle Miami with a lame-duck chief who appears unconcerned with holding Ortiz accountable. A U.S. Department of Justice civil rights investigation into the Miami Police Department ended only in 2016. Promoting Ortiz does not signal to anyone that the department is changing course.

Llanes recently signed an extension to remain chief through the end of March 2018. Within the next five months, he needs to explain to the public why he's promoting Ortiz instead of giving him the boot.

Update: Ortiz on Thursday kindly sent New Times a photo of himself holding his promotional certificate.

"Here is a new picture," he added.

Courtesy of Javier Ortiz
KEEP MIAMI NEW TIMES FREE... Since we started Miami New Times, it has been defined as the free, independent voice of Miami, and we'd like to keep it that way. With local media under siege, it's more important than ever for us to rally support behind funding our local journalism. You can help by participating in our "I Support" program, allowing us to keep offering readers access to our incisive coverage of local news, food and culture with no paywalls.
Make a one-time donation today for as little as $1.