Two tourists ride LimeBikes around Seattle. Courtesy of LimeBike
Miami Beach's Citi Bike rental program is extremely simple: You pay a small fee, pick a bike off a rack, and ride it to another rack and leave it there.

LimeBike, a Silicon Valley startup, is trying to streamline that process even further by removing the need for . You simply leave the bike on the sidewalk when you're done, and the brakes lock automatically.

But if you leave a LimeBike on the street in Miami Beach, there's a good chance the city might confiscate it.

According to a letter City Manager Jimmy Morales sent the city commission July 7, LimeBikes have increasingly popped up across Miami Beach. And rather than welcome a bit of new competition and applaud the company's attempt at technical innovation, city code enforcement has already begun issuing LimeBike $1,000  and is threatening to seize the company's bikes if they're left out in public.

It's unclear how the LimeBikes ended up in Miami Beach, but signs point to nearby Key Biscayne, which last month became the first U.S. city to officially roll out a LimeBike program.

But as new bike-sharing companies sprout around the nation, the battle shows that the bike-sharing world, much like the ridesharing and home-sharing "industries" before them, are becoming increasingly crowded, and more than a few turf wars might be imminent.

The Beach's Citi Bike — which launched as Deco Bike in Miami Beach in 2011 before being renamed in 2014 — is a private company that contracts with Miami Beach and the City of Miami, and likely isn't too happy to see an allegedly cheaper bike-sharing program pop up in town.

According to Morales, because Citi Bike is Miami Beach's "duly authorized exclusive bike-sharing provider," any other service that tries to operate a similar program is apparently illegal. Any new bike-share, after all, would cut into the Citi Bike business model and sap tax revenue from Miami Beach.

Also, LimeBike's cycles just sit in the middle of sidewalks, parks, and city streets when they're not in use. Their presence makes it difficult to walk through town, especially during events. And it's against the city's laws to block sidewalks with parked bikes. According to city documents, this counts as a "right-of-way" violation and will earn you a $1,000 fine. Morales' letter also accuses LimeBike of operating without proper business tax receipts. Violating those rules also brings a $1,000 code-enforcement fine.

The city warned that any LimeBikes left loitering in the public right-of-way will be impounded.

Someone snapped a photo of LimeBikes congregating conspicuously near a Michigan Avenue Citi Bike stop. 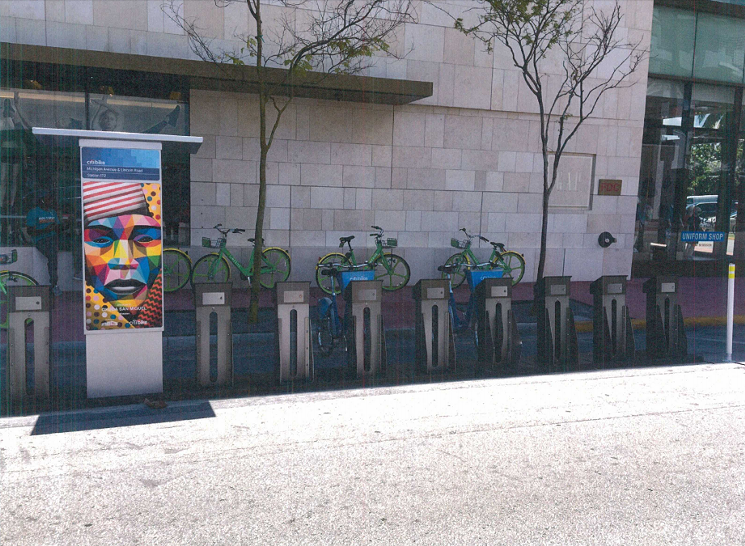 City of Miami Beach
LimeBike's spokespeople didn't immediately respond to messages from New Times. But the startup has garnered tons of positive press lately: LimeBike received an influx of cash from billionaire Silicon Valley über-investor Marc Andreessen and has been partnering with other Silicon Valley buzz-companies such as the office-sharing company WeWork, online shopping site Zulily, and web-development teaching academy Galvanize to provide bikes for their workers.

According to Miami's the New Tropic, two Key Biscayne moms who lived in high-rise apartment complexes — and found it too annoying to cart their bikes up and down the elevators — were the ones who pushed the city to partner with LimeBike. (Key Biscayne will use the LimeBike revenue to fund charity programs in Liberty City.)

LimeBike claims its system is cheaper for cities to  municipalities need to pay for only the bikes themselves, not to install and maintain locking . Riders instead find usable bikes via the LimeBike app, unlock the bikes with their phones, and then pay at the end of the ride based on the amount of ground they covered. LimeBike is battling another, nearly identical sharing startup, Spin, for an operating license in Seattle.

Somehow at least five LimeBikes made it into Miami Beach, according to the city's photograph. But if you cross into Miami Beach's NIMBY-reactionary confines and begin blocking off a sidewalk or two, you can expect a visit from the city's overzealous code enforcement department. (That's also the group tasked with issuing $20,000 fines to homeowners caught renting out their properties on Airbnb.)

The city also hasn't always endeared itself to regular cyclists since the Citi Bike program was rolled out. Miami Beach has tried to paint itself as a bike-friendly but it began threatening to confiscate bikes locked onto city street signs or . The city started tweeting out photos of illegally (but reasonably) parked bikes, warning riders to "Move it or lose it!" The city later said it was threatening only riders who had locked their bikes near Lincoln Road, where biking is banned, but that didn't stop a stream of residents online from complaining there aren't nearly enough around the city.