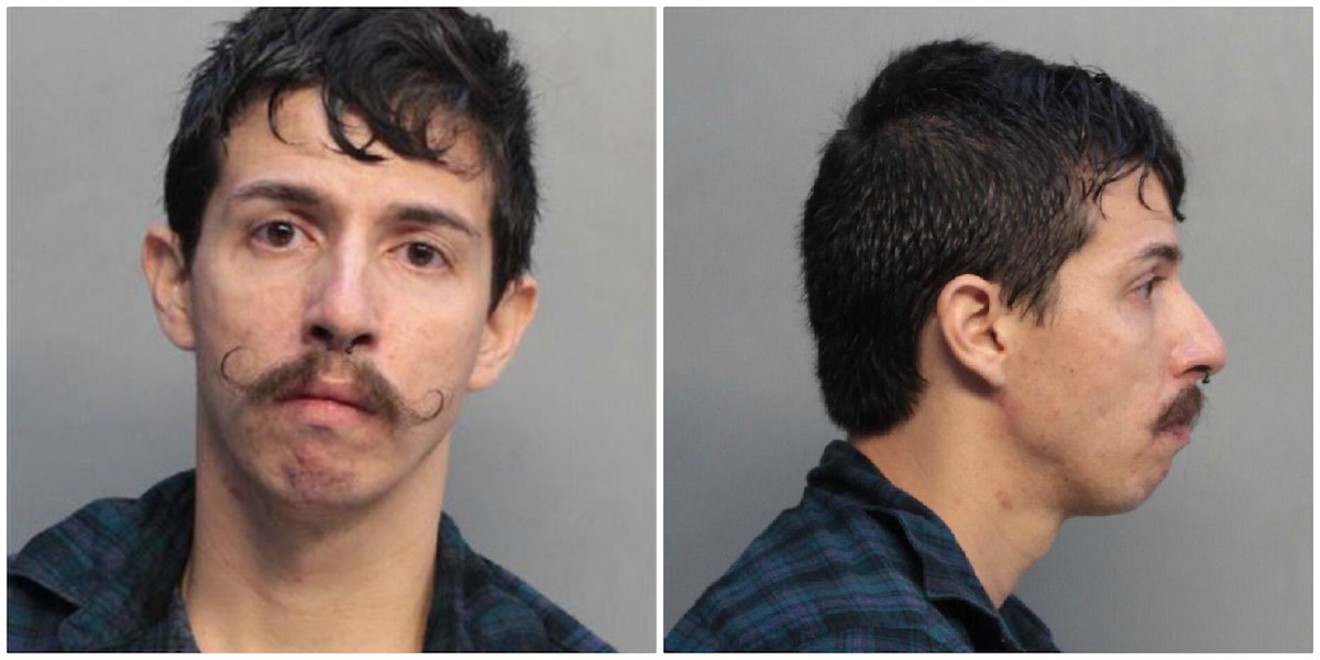 Jacob A. Garcia Miami-Dade Corrections
As fellow passengers record on their cell phones, a young man with a waxed mustache struggles with three Miami-Dade Police officers on an American Airlines plane sitting on the tarmac at Miami International Airport.

"What is the reason why you are removing me from this plane?" he demands, pulling at the officers trying to put handcuffs on him.

"You just assaulted a lady, for one," another passenger said. "You're a racist, for two."

The dramatic, violent arrest onboard an American flight last night began with another passenger claiming that 28-year-old Jacob A. Garcia had groped his girlfriend and ended with Garcia struggling violently with the Miami-Dade cops, who repeatedly tasered him in the chest and back to no avail.
According to an arrest report, Garcia, who lives in Chicago, was accused by another passenger of touching his girlfriend. Flight attendants tried to defuse the situation by moving Garcia to another seat, but the Chicago resident "began to scream and insult [the woman]... and her boyfriend."

That's when the flight crew announced passengers would have to deplane and called police to arrest Garcia onboard. When the three cops made their way to seat 13C, Garcia "began to resist and pull away," the police say in their report.

One of the officers zapped Garcia ten times with a taser for a full 50 seconds, the report says. Still, they couldn't get him off the plane because he "wedged his legs and body in the seat" and "locked his feet around the legs of the seat."


A little excitement caused delay.. Miami PD had to TASE & forcibly remove this asshole from my flight home pic.twitter.com/GhihpmcCiJ

Eventually, they were able to haul him off. But once inside the terminal, they say Garcia "collapsed to the ground" to hamper the cops and then reached for one officer's gun several times. Finally, they got him into a police cruiser, where officers say he "kicked the driver-side rear window out of alignment," causing $150 in damage to the car.

"American began the process of deplaning the entire aircraft. During that process, a physical altercation between the same two passengers took place. Once law enforcement was on the aircraft, the passenger then became combative with the officers from the Miami-Dade Police Department," says a statement from American Airlines on the incident.

Miami-Dade court records show Garcia was charged with one felony count of battery and taken from MIA to Turner Guilford Knight Correctional Center last night. He remained in custody there this morning.