photos: World Police Vehicles via Flickr CC/Fort Lauderdale Police Department
John Jackson, a 50-year-old fast-food employee from Fort Lauderdale, was working on a broken-down car at a convenience store around 1 a.m. on October 21 when a tall, lanky man in a white tank top approached. The two talked for a few minutes until the man suddenly pulled out a gun, shot Jackson once in the head, and calmly jogged away.

But the gunman didn't know his crime was captured on surveillance video — a key clue that police now say helped them find a serial killer would eventually murder three and scrawl a disturbing message in blood. Nathaniel Petgrave, a 22-year-old security guard, is now charged in all three homicides plus an attempted murder.

"[He] did kill all three," Fort Lauderdale Police Chief Rick Maglione told reporters. "He would qualify as a serial killer.”

Jackson's videotaped murder helped set police on Petgrave's trail. As they investigated the scene — a convenience store just a few blocks south of Fort Lauderdale Police headquarters — and reviewed the video, they noticed the killing seemed similar to another one barely 24 hours old.

The previous day around 4 a.m., someone had walked up to two sleeping homeless men outside a gas station in Lauderhill and shot them at close range. One of them, 65-year-old Larry Scott, died on the scene; the other, who hasn't been identified by police, was rushed to the hospital with a gunshot wound to the neck.

In downtown Fort Lauderdale, police found a single 9mm shell casing imprinted with "S&B 9x19 17," according to court records. When detectives called their counterparts in Lauderhill, they discovered that identical shells had been found outside the gas station where Scott died.

Police now had a link between the murders. But who was the gunman? Armed with the surveillance footage from the convenience store, detectives began combing local homeless shelters to see if anyone recognized the shooter. 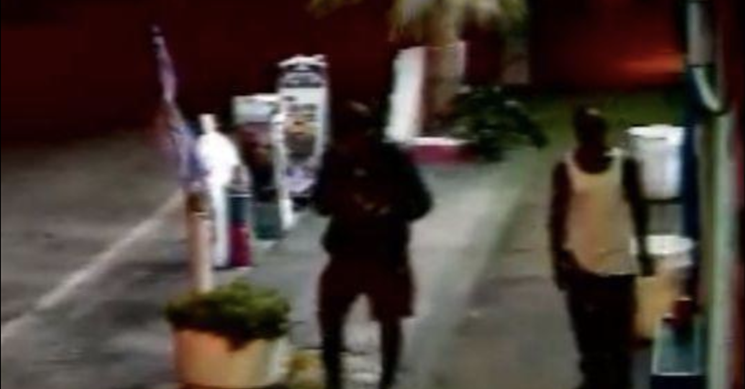 Surveillance footage shows the moment before John Jackson (left) was shot by the man in the white tank top.
via Fort Lauderdale Police Department
At the LifeNet 4 Families shelter in Lauderhill, they got a hit.

"Rose Johnson, one of the employees, stated she believed the still photo was of a subject who frequented the feeding program," police write in charging documents.

Johnson said he looked like Nathaniel Petgrave, a native of Jamaica who had been charged in 2015 with felony aggravated assault when he threatened his brother with a knife and a metal bat during an argument; those charges were later dropped.

Just a month before the killings, police had confiscated a Ruger P95 9mm handgun from Petgrave that he'd been caught using for "target shooting." But five days later, police returned the gun — Petgrave had a valid state license for the weapon, they said. Ammo they confiscated that day matched the bullet casings from both murder scenes.

Police moved in and, on October 24, found Petgrave driving a stolen black Chevy truck. They took him in for questioning, where he told police he lived in a lean-to he'd built in the woods near State Road 7 and Sunrise Boulevard and that he'd buried the gun nearby. Where? "You'll never find it," he told police.

Police found his makeshift shelter and, indeed, had no luck uncovering the Ruger. But they did find more than 30 casings identical to those at the murder scenes and paperwork showing Petgrave owned the gun.

Petgrave was released on the auto theft charges while police tested the rounds. On October 27, the results came back from Scott's murder: inconclusive but likely a match for Petgrave's weapon. They moved in to arrest him.

But in the 12 hours he'd been free, police say, Petgrave struck again. This time, they found his victim in a storage unit — 46-year-old Derick Westley Tucker, a homeless man who'd been sleeping there. He'd been brutally killed with a nine-pound vise, a machete, and a hacksaw, and a message had been scrawled in blood nearby: "4 STOP WAIT TIME."

When police arrested Petgrave later that day, he confessed to using tools he'd stolen from a nearby truck to kill Tucker, they say. The cryptic message referred to the number of victims he thought he'd killed, apparently unaware that one of the two homeless men he'd shot in Lauderhill had survived. Petgrave also confessed to Jackson's murder, the cops say.

His motive? A desire to kill at least five people, police say. He seems to have attacked homeless men simply because they were easy targets.

"In his conversation with detectives, he said his intention was to kill five people,” Maglione told reporters.

Petgrave is charged with multiple counts of murder and attempted murder. He has pleaded not guilty.