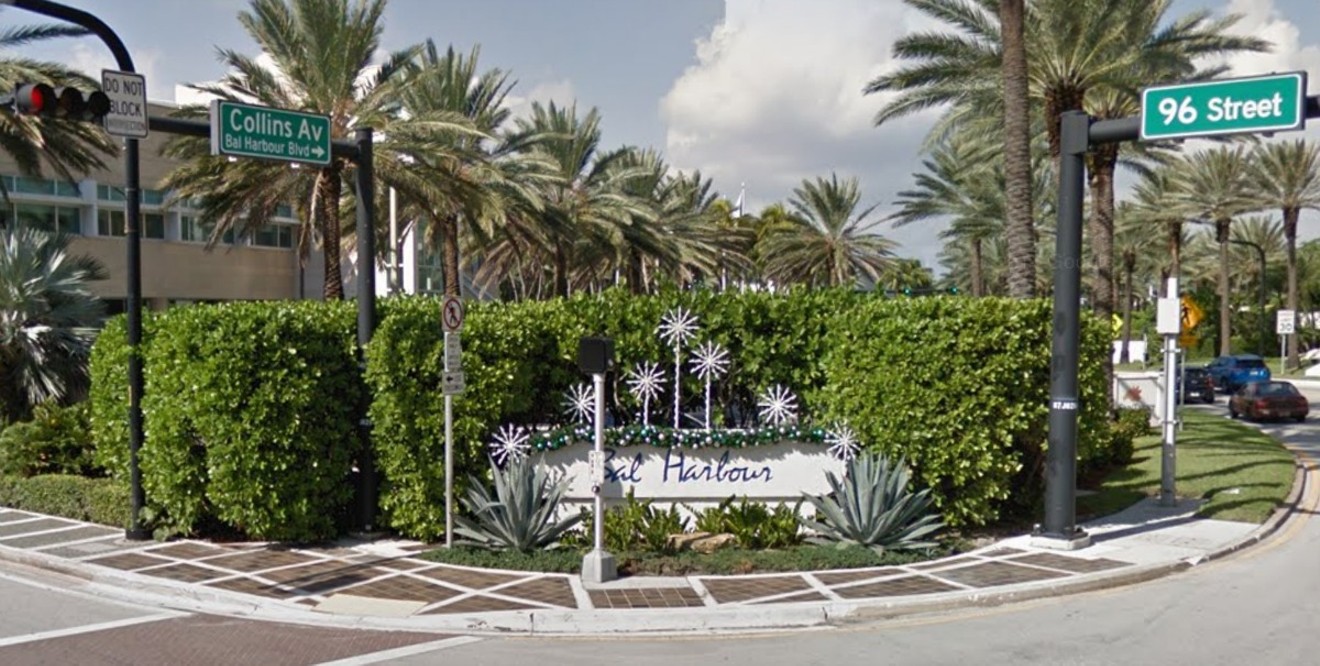 Bal Harbour is known for luxury shopping, not drug crime. via Google Street View
Mention Bal Harbour to a random Miamian, and two things come to mind: an über-luxury shopping mall and one of the most notorious speed traps on A1A. Violent drug-related shootings would certainly not appear on that list.

Yet that's exactly what Bal Harbour's small police force — fresh off a house cleaning over a major international money-laundering scandal — has been grappling with for the past two weeks since a 49-year-old man was shot twice in the parking lot of a beachfront condo building.

Bal Harbour's interim police chief says he's confident the attack, which has so far flown below the radar of Miami's news media, was related to a drug deal gone bad and wasn't a random act of violence.

"All indications are that this was a drug-related shooting," Capt. Miguel de la Rosa says.

The shooting rattled the quiet neighborhood around 1:15 the morning of April 15, according to a police report and a witness who spoke with New Times.

Derrick D. Blake pulled into the lot of the Carlton Terrace, a towering white building at 102nd Street and Collins Avenue, and found a car in his parking space, a witness says. When Blake stopped near the spot, someone jumped out and shot him twice, including once in the face.

Blake staggered into the lobby, where Bal Harbour Police soon found him. "Blake was covered in blood and appeared to have a gunshot wound to the left side of his face, cheek area," police wrote in a report that night.

He told police the shooter had fled north on Collins over the Haulover Bridge, but cops weren't able to track down the car. Blake was taken to Aventura Hospital with non-life-threatening injuries.

The gunshot victim has an extensive criminal record in Miami, court documents show. His multiple felony charges include grand theft, burglary, and cocaine possession, though his most recent serious charges — for possessing firearms as a felon — were dropped by prosecutors in 1997.

For a small village defined by its ritzy mall, Bal Harbour has found a way to make jaw-dropping news in recent years. In 2013, then-Police Chief Thomas Hunker was forced to resign amid a Miami Herald investigation into massive money-laundering operations run through the tiny force, which is actually housed inside the mall.

Bal Harbour cops laundered $71.5 million from criminal groups with the supposed goal of infiltrating them but never took a single case to court. The officers, meanwhile, spent thousands on travel and lodging and funneled $2.4 million into their department's budget.

A grand jury in Chicago opened a probe into the force last year.