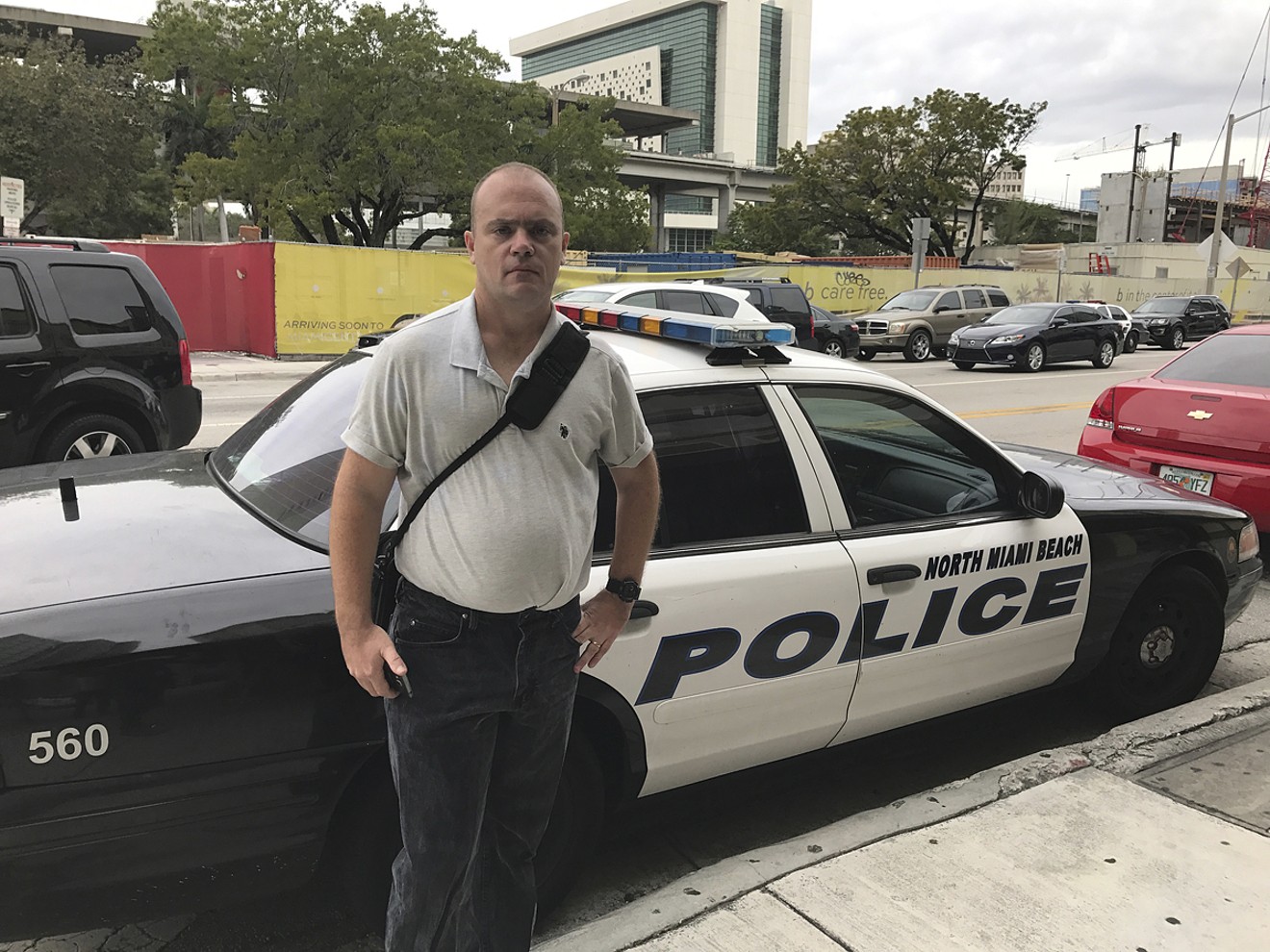 Glen Carr: "They have to be accountable." Photo by Tim Elfrink

Glen Carr pulls out his cell phone as soon as he rounds the corner outside the Miami-Dade County Courthouse. He knows he'll spot them soon.

Then, after he walks just a half-block more, the 40-year-old with a military buzzcut stops and points.

"Look, there are two I can see right now that are illegally parked," he says, chuckling softly and gesturing up NW First Avenue.

Sure enough, two black-and-white Miami Shores Police cruisers sit on either side of an intersection. Both are in crosshatched areas directly in front of no-parking warnings. Carr crosses the street to snap photos that show the signs and the cars' license plates.

"They always park right here," Carr says. "You can see the signs. It's clearly no parking."

For the past six months, Carr has been waging a one-man war on cops who flout parking laws. He hasn't struggled to find scofflaws. Every morning, he walks from his downtown apartment to the Metromover stop outside the courthouse. And nearly every day, he documents a half-dozen police cars hanging out in illegal spots.

"I feel like I'm doing the most I can to help the police officers."

Since August, Carr has sent at least 125 complaints, with photographs and details of where and when he found the illegally parked vehicles, to departments around Miami-Dade County. He's been berated by some officers, ignored by internal affairs investigators, and, more recently, validated by the independent Civilian Investigative Panel (CIP), which ruled that 15 Miami Police Department cops had broken regulations. 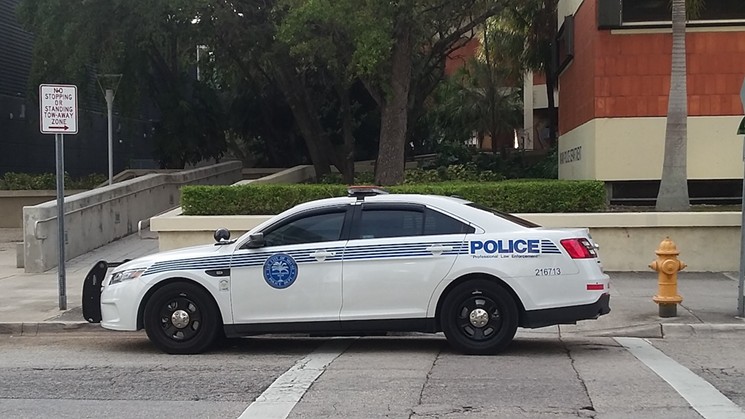 One of the many illegally parked police cars that Carr has caught on camera.
Photo by Glen Carr

But Carr is far from a bomb-throwing, anti-cop anarchist. He's an active-duty Army major working toward an MBA at the University of Miami who says he just wants police to follow the rules like everyone else.

"It's not like I'm against them. I just want them to be better at what they do," Carr says. "I feel they don't hold each other accountable."

Carr grew up in Montana and attended Montana State University for two years before he dropped out to join the Army. "I decided to join the military to finish my degree in there," he says.

He specialized in logistics, serving in Colorado, Georgia, and Alaska before being deployed to Afghanistan in 2002. He served nine months at Forward Operating Base Salerno, a remote, battle-scarred base near the Pakistan border that later gained fame when former NFL star Pat Tillman was killed there by friendly fire in 2004. "It was a rough assignment just a few months after 9/11," Carr says. 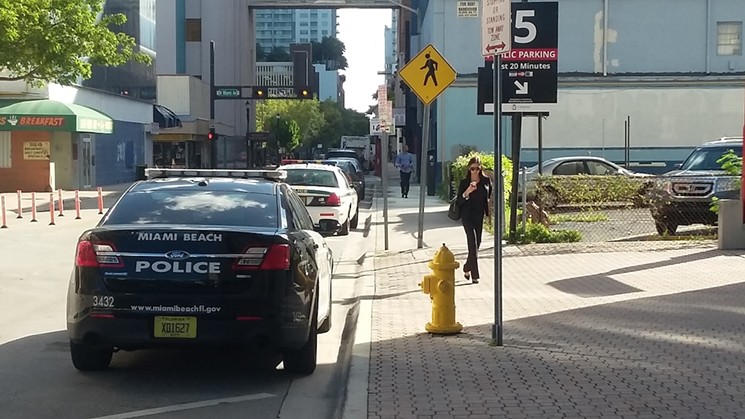 But he loved his work in the Army. He returned to the United States to train as an officer at Fort Bragg, where he joined the 82nd Airborne Division and spent seven years "jumping out of planes," he says. He later served two stints in Iraq and an assignment at the Pentagon.

One day in Maryland about four years ago, Carr was teaching his 16-year-old daughter how to drive when two police cars went rocketing by on the interstate, doing 80 in a 55 mph zone without lights on.

Carr began looking into state law and couldn't find any reason a police officer should speed on the interstate without emergency lights. So he and his daughter complained, and the local police promised to look into it. "I was able to show my daughter, hey, they were wrong; the police can be wrong too," Carr says. "But they have to be accountable."

Thus was born his new obsession: As he traveled around Virginia and Maryland on his way to and from the Pentagon, he began snapping photos of cops breaking parking and traffic laws and then filed complaints. He knows the infractions are minor, but Carr believes they hint at a larger problem.

"If a police officer is parking in a handicapped spot or in front of a fire hydrant because he's running late," he says, "then what else is he doing wrong?" 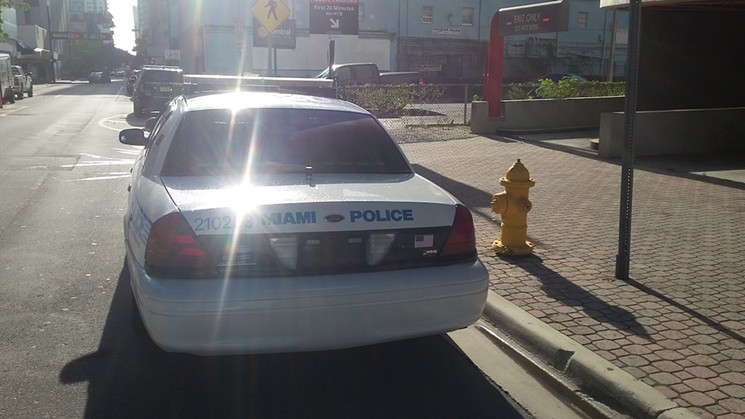 When Carr moved to Miami in August to study at UM, he wasn't prepared for cops' blatant disregard for the letter of the law. "It's much worse here than anywhere else I've lived," he says.

Local cops haven't been entirely receptive to his photos and complaints. Some have jumped from their cars, demanding to know why he's photographing them.

"I've had a bunch of lieutenants and captains call me, arguing that police officers are allowed to park in no-parking zones if they want to," Carr says. "I asked them for the statutes that say so, and they can never produce any."

Carr does have the statute, though: Florida 316.072, which says all government vehicles — including police — must obey traffic and parking laws unless they're in pursuit of a suspect, responding to an emergency, or dealing with a fire. Neither being late for court nor desperately needing Starbucks coffee is a legal exception. 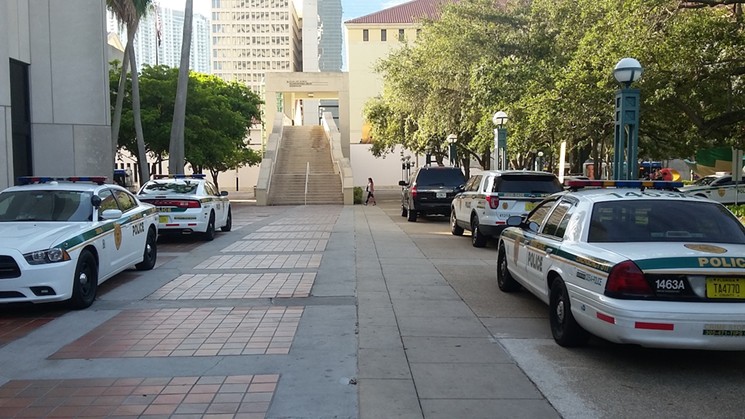 Some smaller police forces have quickly responded to his complaints, Carr says, and promised to counsel officers to obey parking rules. But others have gone to comical lengths to ignore him. After submitting dozens of complaints to Miami Police, he began calling the internal affairs officers for an update on his cases. Magically, all the complaints had disappeared.

"I don't know if they were losing them on purpose or by accident," Carr says.

That's when he went to the CIP, the independent board that investigates complaints against Miami cops. In January, the board found that 15 city officers he'd photographed in no-parking zones had broken state law and department rules by illegally parking. (The CIP did clear the IA of any wrongdoing in its investigation of Carr's complaints.)

The ruling was a validation of Carr's work — but the CIP's judgments are only recommendations.

But that won't dissuade him from calling out the police. After he finishes photographing the two Miami Shores cruisers outside the courthouse, he notices a North Miami Beach Police SUV sitting at the other end of the block in a no-parking zone. He angles for the perfect photo of the violation.

"I feel like I'm doing the most I can to help the police officers," he says. "I want them to follow the rules."