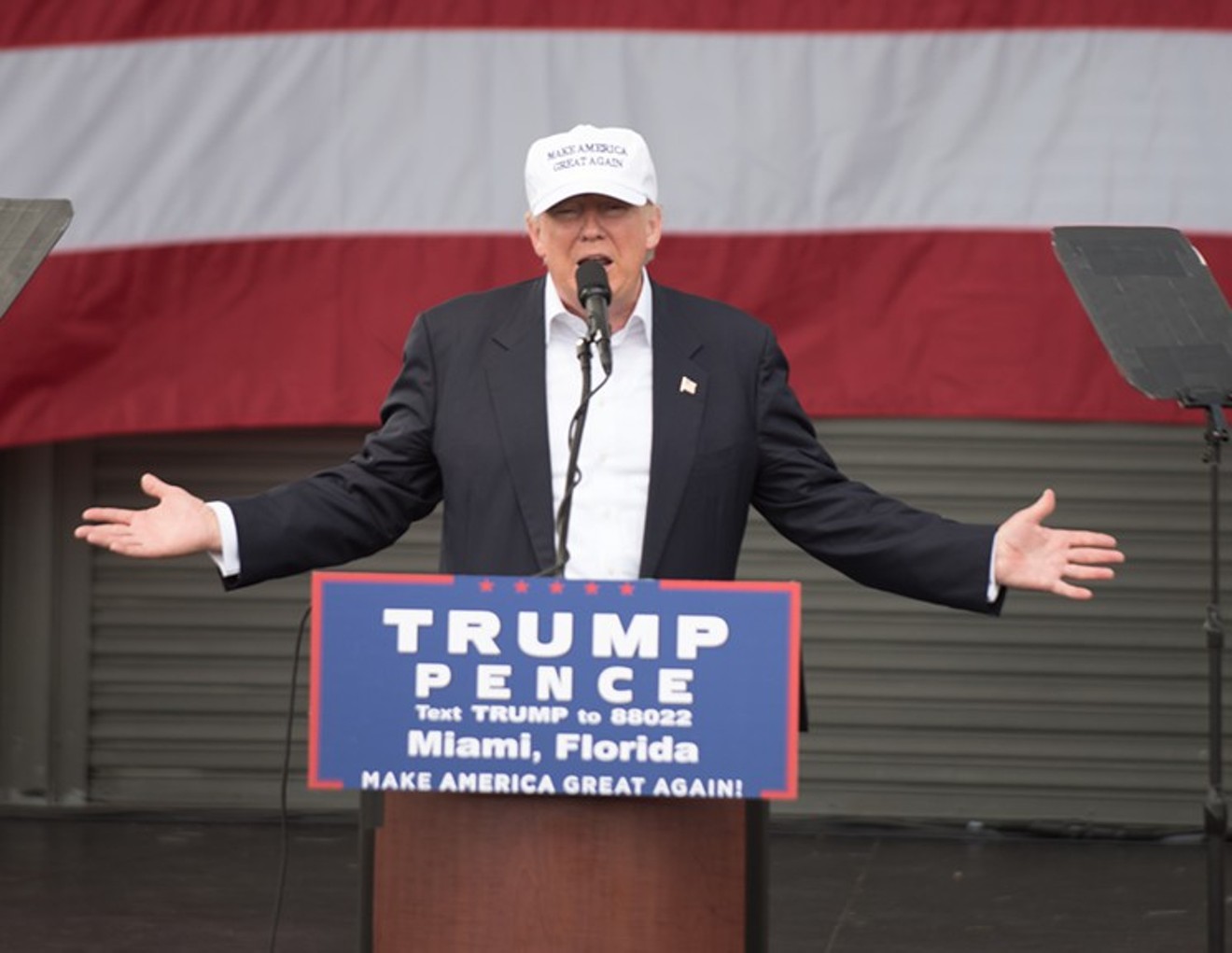 Photo by Michele Eve Sandberg
Donald Trump is, contrary to his own daily assurances, despised by those around him. His White House is a cesspool of cynical weasel-people sniping at one another in the press and ratting him out to federal law enforcement. His own kids barely like him.

His business acquaintances in Miami apparently share that feeling. According to recent deposition transcripts New Times has obtained, Miami-area megadeveloper Michael Dezer, who owns Trump Towers III in Sunny Isles Beach and built the property with Trump, said he avoided building a personal relationship with the Donald over the many years the two worked together.

Why? Dezer testified he was afraid Trump would ask him for cash.

"Donald Trump was also my associate for many years, and we didn't want to talk personal because I was afraid he was gonna ask for money," Dezer told Miami-Dade County prosecutors June 8, 2016. He added that "as much as Donald Trump [has], and I'm the little guy from here, you keep the conversation — I learned it a long time ago, don't go personal."

The elder Dezer, an Israeli immigrant whose full last name is "Dezertov," was speaking to prosecutors as part of an investigation into North Miami Beach Mayor George Vallejo, who earlier this year was sentenced to house arrest after getting caught using campaign money to pay for personal expenses such as clothing and groceries. New Times later obtained Vallejo's sworn testimony, in which he admitted that the Dezer family had paid off Vallejo's wife for years and that the Vallejo family created shell companies to hide those payments from the public. (One LLC was even headquartered in Wyoming.) At the same time, Vallejo voted on zoning changes that affected Dezer properties, including the massive Intracoastal Mall site that the Dezers hope to redevelop. (Reached by phone earlier this year, Dezer demanded questions from New Times be sent via email but has never responded to any follow-up messages, nor did he respond to a message left this afternoon.)

Records show many members of the Dezer property empire were interviewed as part of the Vallejo probe. Miami-Dade State Attorney Katherine Fernandez Rundle's office spoke with not only the patriarch, Michael Dezer, but also Michael's wife, Naomi, who effectively acts as the company bookkeeper. Son Gil Dezer also spoke with state prosecutors, as did multiple other Dezer business associates.

The family has long been known for being close to the Trumps. Gil Dezer infamously wrote a high-school book report about Trump's Art of the Deal and has told multiple news outlets that he modeled his business style after the Donald. In 2004, the younger Dezer bragged to New Times about being able to get Trump on the phone whenever he wanted.

Much like Trump's empire, multiple Dezer properties have been involved in money-laundering probes, though there is no evidence the Dezers have ever broken the law. One Dezer building, Sunny Isles Beach's Porsche Design Tower, is linked to both a criminal probe in Brazil and a major U.S. money-laundering investigation involving Venezuelan officials. A Russian prostitution ring was also recently busted inside Miami's Trump Towers III, though there's also no evidence the ring was related to either Trump or the Dezer family.

The latest Trump disclosure perhaps hints that the president's self-reported net worth might be a bit inflated. Trump himself claims he's worth upward of $10 billion, though most outside analysts assume he's worth far less and might not even be a billionaire. (Trump has also repeatedly filed for bankruptcy.) Maybe Michael Dezer's comment was just an offhanded joke — or maybe the barb was yet another sign that a sitting lawmaker should obtain Trump's tax returns already.
KEEP MIAMI NEW TIMES FREE... Since we started Miami New Times, it has been defined as the free, independent voice of Miami, and we'd like to keep it that way. With local media under siege, it's more important than ever for us to rally support behind funding our local journalism. You can help by participating in our "I Support" program, allowing us to keep offering readers access to our incisive coverage of local news, food and culture with no paywalls.
Make a one-time donation today for as little as $1.