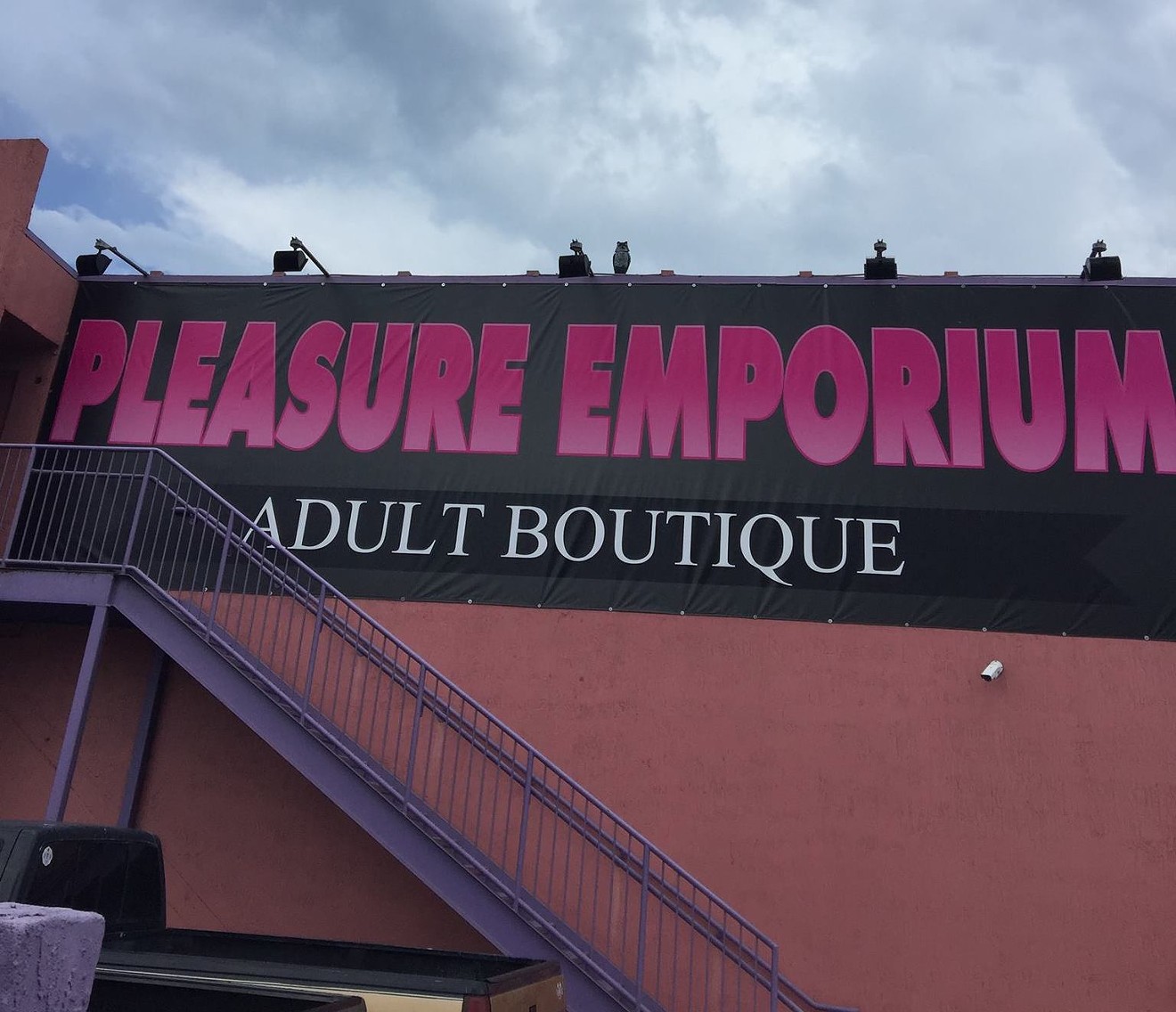 Pleasure Emporium / Facebook
Update: A lawyer for one arrested man confirmed to New Times that her client was outed due to his arrest and subsequently fired from his job.

Rather than use their platforms to ask why Hollywood PD is wasting its time and taxpayers' money harassing consenting adults, virtually every major news organization in South Florida — including WPLG, WFOR, and the Miami Herald — chose to publish the names, ages, and mug shots of the men arrested yesterday for the so-called crime of having consensual gay sex inside a building. That decision subjected 13 men to unnecessary shame and possibly outed LGBTQ+ people, leaving them vulnerable to abuse, harassment, or retaliation.

The stories committed some of the most clichéd and obvious sins of crime reporting, from unnecessarily publishing mug shots, to the uncritical parroting of police-department propaganda, to using sex as an obvious click-traffic grab, to — in the Herald's case — joking that the people who just needlessly had their lives ruined by a local police department were all watching Rocky Horror Picture Show.

WPLG's Amanda Batchelor didn't immediately respond to messages from New Times today about her story. But after New Times asked about the piece, Miami Herald metro editor Jay Ducassi said the paper edited out the IDs of the men and removed their mug shots from the story. The Rocky Horror joke was also deleted.

"We agree it was unnecessary to have run the IDs and mugshots," Ducassi said via email. "We reedited the story and took them out."

The piece now contains a note that says the "story has been updated to remove portions deemed inappropriate under the Miami Herald’s editorial standards."

Media critics for years have argued that reporters should rethink covering petty crimes and publishing mug shots in cases where little public interest is served. The various stories about the Pleasure Emporium bust were classic examples of the pitfalls of such coverage — beginning with the fact there was no reason to report on the arrests at all.

While it's spending time busting gay men for consensual sex, Hollywood PD doesn't seem all that excited to investigate actual sex crimes. In 2014, HPD reported it had 94 rape kits sitting in storage, and some hadn't been tested for as many as nine years. The police department didn't even bother filling out a rape-kit-backlog survey the Florida Department of Law Enforcement published in 2016. The Sun Sentinel reported that HPD submitted blank documents instead.

Yet HPD spent significant time putting together an undercover sting at Pleasure Emporium and arresting 11 consenting adults on charges of "public exposure of consensual organs." The two men having oral sex were charged with committing "unnatural and lascivious acts" in public.

Any journalists worth their salt should be asking HPD why it expended resources on these arrests, but nobody bothered to inquire yesterday.

Not only did the 13 arrests make zero people "safer," but also, in many ways, they made the world worse. Thirteen men now have to deal with the stress and financial pressure that comes with being arrested. They might lose their jobs, because Florida still doesn't protect LGBTQ people from being fired over their sexual orientation. Because they might not be publicly out as men who have sex with men, the arrests mean these 13 people could be shunned by their families or verbally or physically harassed.

But no one in Miami's media ecosystem bothered to weigh that potential harm versus the nonexistent public interest in arrests such as this one. WTVJ published every single mugshot, while WPLG's Batchelor went as far as to provide a numbered list of all 13 men's full names. These men might be able to get their records expunged in the future, but it will be years before these stories vanish from the internet, if they ever vanish at all.

It's worth noting that WPLG has a history of mistreating stories about sex crimes. In 2017, the TV station's editors were forced to apologize after a New Times reporter noted that the station said a suspect was caught "having sex" with, as opposed to raping, an unconscious victim. Also, former WPLG anchor Charles Perez filed a formal government complaint against the station in 2009 after he said he was fired for being gay. (New Times later spoke to sources who alleged he might have actually been fired for being a victim of domestic abuse.)

The media had a reckoning with publicly outing private individuals in 2014 after the Grantland story "Dr. V's Magical Putter," which outed a transgender woman, Essay Anne Vanderbilt, who killed herself. In response, the National LGBTQ Task-Force issued a statement noting that public outings are linked to suicide and that journalists should, in nearly all cases, take extreme care to avoid the practice — especially in cases where a reporter might not know whether a person is "out." The nonprofit writes:

The act of outing someone is detrimental because it is a violation of their privacy. Often people who are outed feel blindsided and forced to reveal a deeply personal part of their identity without their consent and under someone else’s terms. Coming out is a process and can be a difficult time for someone because of discrimination, homophobia, or potential marginalization from their families and community at large. People must choose for themselves how and when to come out.

Something as simple as changing your name can reveal insurmountable consequences and threatening challenges. How bad is it to out someone? Bad enough for the Social Security Administration to end its policy of outing transgender employees to employers in 2011.

Thankfully, at least two media outlets got it right yesterday without having to be publicly shamed first. The Sun Sentinel put together a 159-word news brief that avoided naming any of the arrestees or publishing their images. And WSVN avoided covering the wholly unnecessary story altogether.

Unfortunately, this post is not even the first to chastise Florida media outlets for awful LGBTQ+ coverage this month. Last Thursday, the Orlando Weekly lambasted that city's police department and media outlets after the Orange County Sheriff's Office and multiple TV stations incorrectly referred to transgender murder victim Sasha Garden as a "man in a wig" and a "man in a dress."

Florida's media ecosystem can — and must — do better.
KEEP MIAMI NEW TIMES FREE... Since we started Miami New Times, it has been defined as the free, independent voice of Miami, and we'd like to keep it that way. With local media under siege, it's more important than ever for us to rally support behind funding our local journalism. You can help by participating in our "I Support" program, allowing us to keep offering readers access to our incisive coverage of local news, food and culture with no paywalls.
Make a one-time donation today for as little as $1.