Photo by Isabella Gomes
Update: Det. Alvaro Zabaleta, a spokesman for Miami-Dade Police, says the department’s sexual predator unit is aware of the memorandum and is monitoring the situation to determine a plan of action come May 6. More of Zabaleta’s response has been added below.

Since 2014, a colony of homeless sex offenders has been rapidly growing by the railroad tracks near Hialeah. Nobody wants them there, including the dozens who call the ramshackle camp home. Everyone, from the Homeless Trust to the ACLU to the county commission, agrees the encampment is a public health and safety hazard. But for years, the sex offenders have said that restrictive county laws mean they have nowhere else to legally live and that county officials have failed to solve the problem.

In December, after New Times published its latest story chronicling the squalid conditions of the camp and its effect on local business owners, Miami-Dade's Public Safety and Health Committee took action. With a vote of 3-1, commissioners on the committee voted to amend an outdoor camping ordinance in a way that would effectively shut down the camp. The rest of the county commission passed the item in January, and Mayor Carlos Gimenez in March issued a memo giving the homeless residents 45 days to vacate.

With the May 6 deadline quickly approaching, outreach groups have been working with the sex offenders to find new places to live. But thanks to stringent local laws governing where sex offenders can live, many homeless advocates worry they have few alternatives to their camp near the intersection of NW 71st Street and 36th Court. According to the mayor's letter, Miami-Dade Police officers have the option to "remove" those who stay, a clause that refers to a local law permitting police to arrest those who trespass on county property.

"The message being given to the people living there is if you're there on May 7, that you'll be subject to arrest," says Jeffrey Hearne, an attorney with Legal Services who has represented residents of the camp.

As many as 300 sex offenders have a registered address at or near the encampment, according to state records. Under a 2005 county law ordinance named for Lauren Book, a Florida senator and survivor of child sex abuse, offenders who abused victims under the age of 16 must live 2,500 feet from any school, much farther than the 1,000 feet required under state law.

A 2017 report commissioned by the ACLU found that across the county, only 320 affordable rental units met those guidelines. 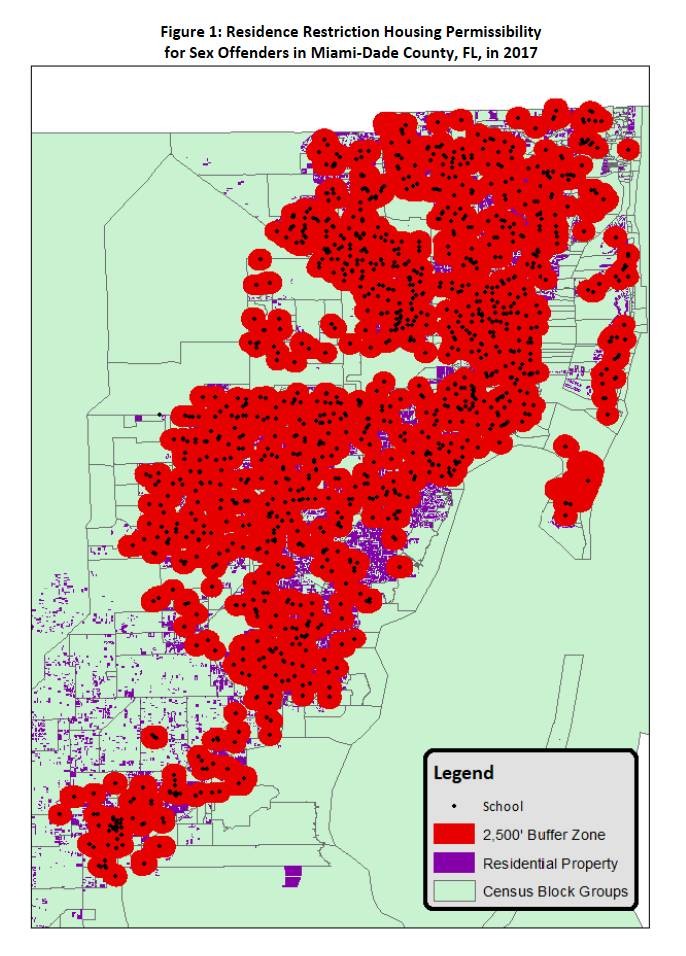 Courtesy of ACLU
Since August, the Homeless Trust, its chairman Ron Book (Lauren's father), and the Housing Assistance Network of Dade have been distributing information about rental assistance to the homeless offenders who live at the camp. But other homeless advocates say the assistance is no good if the offenders can't find a landlord who will rent them a home.

"Many people there would love to accept that rental assistance, but they have not been able to find the housing which would permit them to accept it," the ACLU's Jeanne Baker told commissioners in December.

As the deadline looms, it remains unclear what will become of the people who stay behind at the camp. Frank Diaz, a pastor who works with the homeless residents, says probation officers are encouraging some offenders to move near the Krome Service Processing Center at the edge of the Everglades.

"They have been told starting May 6, whoever remains is gonna be taken away, have all their possessions thrown away, and possibly be arrested," Diaz says.

The Miami-Dade Police Department has not yet answered New Times' questions about what will happen after the deadline.

Update: Detective Alvaro Zabaleta, a spokesman for Miami-Dade Police, says the department’s sexual predator unit is aware of the memorandum and is monitoring the situation to determine a plan of action come May 6.

“We’re hoping everyone gets placed and everything works itself out between the county and them,” he says. “The memo says we are the last resort. We want to make sure that is the case.”

No formal directive has been issued yet because it’s still unclear if or how many offenders will remain at the camp after the deadline.

“The last thing we want is to have to take any enforcement,” Zabaleta says. “It just depends how everything lays out between now and May 6. It’s hard for us to have a plan of action if we don’t know how things are going to go.”