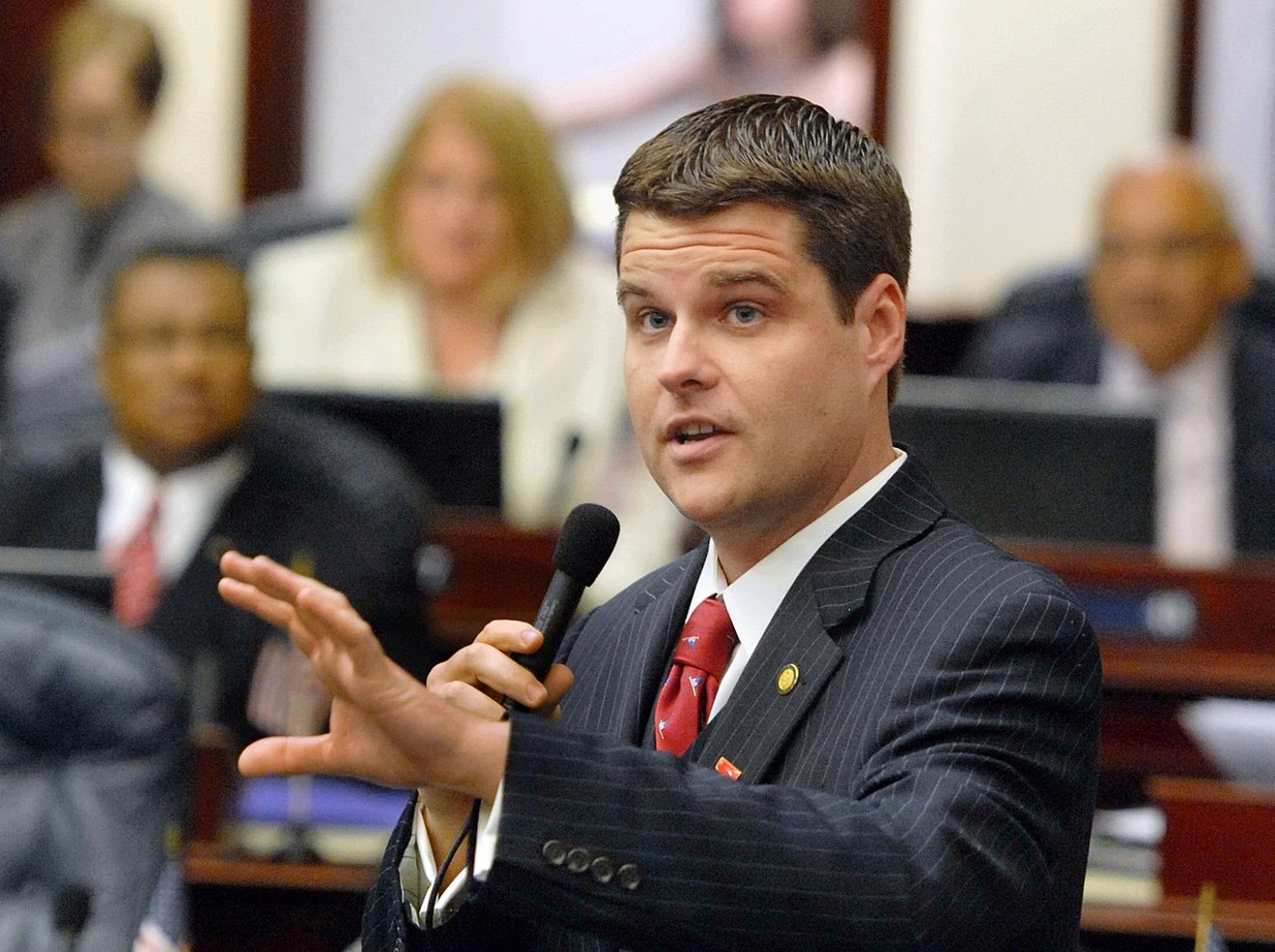 Rep. Matt Gaetz Florida House of Representatives
Matt Gaetz, Florida congressman human worm, had a hell of a week. He defended someone associated with the alt-right, all but certainly committed a literal crime on Twitter, and topped it all off by defending a billionaire child-rapist. The sad part, of course, is a lot of people close to Gaetz assume much of this is an act designed to gin up support from his far-right Panhandle voting base. But, if anything, that makes Gaetz's conduct even worse. He's undermining America's trust in democracy, propping up the single dumbest person to ever inhabit the White House, and doesn't even believe his own bullshit.

In positive news, there's an outside shot Gaetz gets himself censured, disbarred, or arrested. Here's a recap of the unconscionable nonsense he put America through last week alone:

1. Defended a "journalist" tied to the Proud Boys who got banned from Twitter for heinous racism

Jacob Engels, a Central Florida blogger and InfoWars contributor who is closely linked to both Roger Stone and the Proud Boys extremist gang, got himself banned from Twitter over the weekend by accusing Muslims of operating "roaming rape gangs." That's an obviously hideous thing to say, and Engels deservedly got himself banned for the statement.

Amazingly, Gaetz — who is also closely aligned with Stone — managed to come out on the wrong side of this one. He defended Engels, and, to boot, a link to Big League Politics, a website run by pro-Trump trolls and former Breitbart employees. (The website has also promoted the #QAnon conspiracy theory.) Gaetz, uh, definitely should not be tweeting this out to his followers:

It is very dangerous to have @Twitter kicking people off the platform because they don’t like their speech. This is a slippery slope. #FreeJacob https://t.co/O1qNZoLy7D


2. Committed witness tampering publicly via Twitter and immediately got caught

Michael Cohen, a lawyer who spent years coordinating various sketchy business deals on Trump's behalf, has infamously flipped on his old boss and has been dishing damaging information to the feds. Cohen is set to testify in front of Congress tomorrow, where he is expected to say Trump both exaggerated his net worth to seem important and minimized it to avoid taxes. Some other carnival-like nonsense will also likely occur.

Ahead of that testimony, Gaetz very publicly did something that he is not allowed to do. He blackmailed a witness. In writing. On Twitter.

"Hey @MichaelCohen212 - Do your wife & father-in-law know about your girlfriends?" Gaetz tweeted. "Maybe tonight would be a good time for that chat. I wonder if she’ll remain faithful when you’re in prison. She’s about to learn a lot..."

Legal experts are already telling Gaetz that he could very be in serious trouble. Because — and it's amazing we have to explain this — one cannot blackmail a federal witness.

Gaetz has already told a few Capitol Hill reporters that he is "witness testing, not witness tampering" and that his comments are just part of the "marketplace of ideas." Importantly, Gaetz does not sit on any committees involved in the Cohen hearing. He's just a friend of Donald Trump's. (Cohen has already claimed through his lawyer that Trump's associates have been threatening him for months now.)

3. Laughed off the fact that the Florida Bar is investigating him for doing an obvious mob-style crime

Via the Miami Herald:

Gaetz said the Florida Bar’s preliminary investigation into his tweet is a formality because they received multiple complaints about it. He expects the inquiry to go no further.

“The Florida Bar has to investigate,” Gaetz said. “If I said [a reporter standing next to him] purposely wears striped ties because he knows they intimidate me and if I filed a bar grievance against him for that purpose, they would have to investigate, so I’m not concerned.”

There are layers of investigation that must be completed before Gaetz could face any formal punishment from the Bar, and he has a chance to formally respond. The inquiry announced Wednesday is a first step.

Gaetz tried to formally join Wednesday’s Oversight Committee hearing to question Cohen even though he is not a committee member, but he said Democrats blocked his request. Members often join committee hearings they are not a part of when they are particularly interested in an issue. The request is usually granted.

“We shouldn’t be doing that stuff up here, you might not like what somebody is going to say but you shouldn’t be trying to intimidate them or their family, it’s wrong,” Scott said. “I think it’s disgusting and I’m glad he apologized.”


4. Allegedly was overheard telling Trump he was proud to commit crimes on the president's behalf — though Gaetz now claims he was speaking to Florida Gov. Ron DeSantis in the call referenced below:

President Trump called @mattgaetz last night from Hanoi to talk the Cohen testimony and the threats (since rescinded) Gaetz made about Cohen.
"I was happy to do it for you. You just keep killing it," Gaetz was heard telling him.
(Gaetz told me he doesn't discuss calls w/POTUS)


5. Defended the Miami prosecutor who gave a sweetheart deal to a prolific rapist of children

Via the Miami Herald:

But Florida Rep. Matt Gaetz, one of President Donald Trump’s biggest defenders in Congress, is taking a different approach.

In an interview with the Miami Herald on Wednesday, Gaetz said reexamining Acosta’s handling of Epstein’s case, which came under increased scrutiny after the Herald’s three-part series Perversion of Justice, sets a “dangerous” precedent for prosecutors. A federal judge ruled last week that prosecutors run by Acosta, then the U.S. attorney for South Florida, broke the law when they failed to inform Epstein’s underge victims of the plea agreement. The judge gave federal prosecutors 15 days to confer with Epstein’s victims and their attorneys to come up with a resolution

“I don’t know what I don’t know and certainly if there is ever an indication of misconduct, that has to be thoroughly reviewed, but I think it’s a dangerous thing to go back and second-guess decisions that prosecutors have to make in real time,” Gaetz said. “I’m deeply troubled by Mr. Epstein’s actions, I think that he certainly should have faced a far stiffer consequence than he did, but having tried cases I know that it’s hard to go back and sort of second-guess the risk analysis that goes into putting witnesses before a jury and subjecting them to cross examination.”

In fact, the judge in the case, U.S. District Judge Kenneth A. Marra was careful to say he was not questioning the prosecution’s authority to sign a non-prosecution agreement. However, the judge said the U.S. attorney had an obligation to consult with Epstein’s victims under the Crime Victims’ Rights Act. Acosta’s deliberate decision not to do so — at the insistence of Epstein’s legal team — violated that law, rendering the outcome illegal, Marra wrote in a 33-page order.

Gaetz’s stance is not shared by other South Florida lawmakers, including Republicans.

(And, for someone who doesn't like "questioning" prosecutors, Gaetz sure spends a lot of time attacking Special Counsel Robert Mueller.)
KEEP MIAMI NEW TIMES FREE... Since we started Miami New Times, it has been defined as the free, independent voice of Miami, and we'd like to keep it that way. With local media under siege, it's more important than ever for us to rally support behind funding our local journalism. You can help by participating in our "I Support" program, allowing us to keep offering readers access to our incisive coverage of local news, food and culture with no paywalls.
Make a one-time donation today for as little as $1.