Here's a History of Recent Neo-Nazi Arrests in Florida 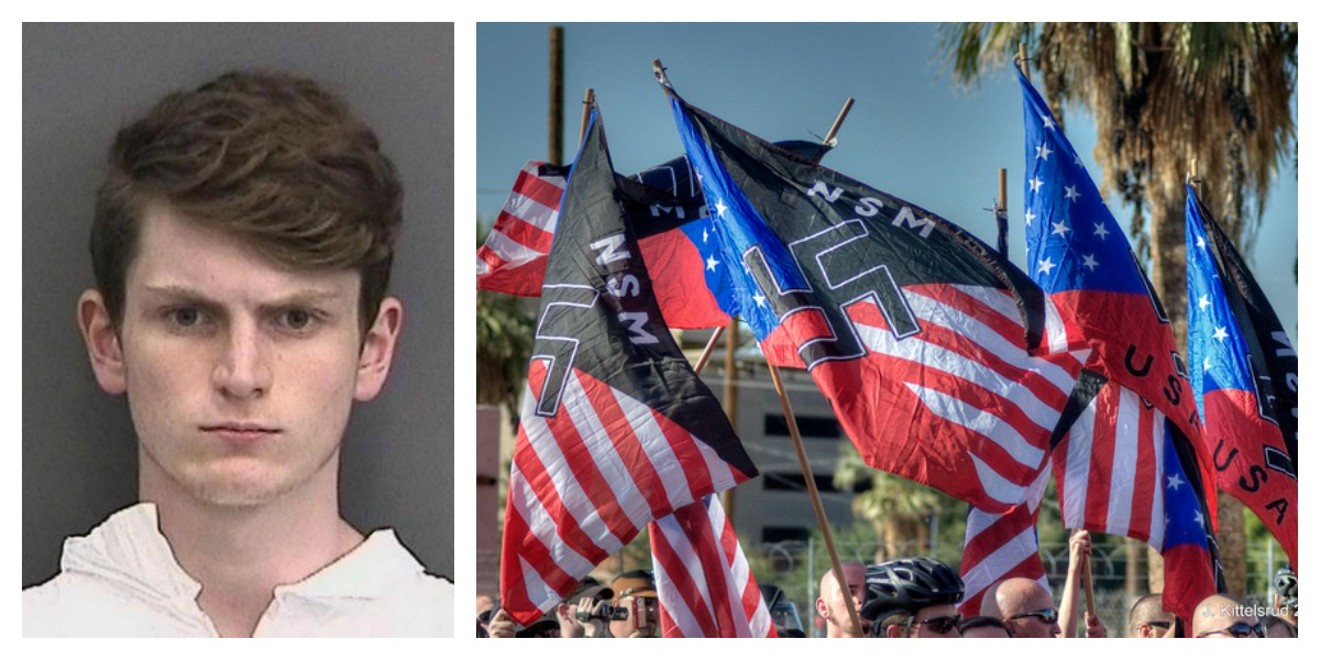 Devon Arthurs (left) murdered two roommates after abandoning his neo-Nazi beliefs and becoming a Muslim. Another roommate, Brandon Russell, was arrested in the Keys on charges of stashing bombs and radioactive materials. photos: Tampa Police Department/John Kittlesrud via Flickr CC
Florida is the nation's repository for scumbags, a weird little drain trap that snares the frauds and lunatics who rattle through the nation's plumbing before the United States jettisons them out to sea. So it makes sense the state would be filled with its fair share of neo-Nazis. What would Florida be without its own special breed of  assholes hellbent on ethnic cleansing?

In the wake of the terror attack in Charlottesville, where a neo-Nazi killed 32-year-old Heather Heyer when he rammed a car into a group of anti-racism counterprotesters, many politicians claimed the protesters didn't "represent" America or its values. But at its core, this country was founded by racist idiots reliant on a horrid system of subjugation in order to make a living. Those ideas never died — and there are plenty of recent Florida cases that show why it's important to keep fighting these cretins:

1. A neo-Nazi was arrested in the Keys this year on charges of stealing bombs and radioactive materials to try to blow up the Turkey Point Nuclear Generating Station in Homestead:


For the past year, Brandon Russell has saluted the flag and worn the uniform of the Florida National Guard while serving his country as a private first class. But in his suburban Tampa apartment, Russell and his three roommates pledged allegiance to a whole different ideal. Russell's bedroom was decorated with neo-Nazi and white supremacist propaganda and a framed photo of Oklahoma City bomber Timothy McVeigh. His garage was full of guns, ammo, and high-powered materials for bomb-making.

Russell is now in federal custody after Monroe County Sheriff's deputies arrested him in Key Largo this past Sunday. He was busted after a bizarre and bloody massacre last Friday, when one of his three neo-Nazi roommates — 18-year-old Devon Arthurs — apparently converted to Islam and then executed their other two housemates.

Federal agents say Russell wasn't just a dangerously bigoted member of the armed forces. He also had legit bomb-making supplies and even radioactive materials, and claimed to be a member of the Atomwaffen: a splinter group of neo-Nazis whose name means "atomic weapon."

2. The leader of a neo-Nazi group called American Front was sent to jail for trying to ignite a "race war" near Disney World in 2014:

Two years ago, the feds busted the Aryan compound before they could carry out any of their plans. Yesterday, Faella was sentenced for his role as the group's leader.

So what does plotting a race war carry in Florida these days? Just six months in jail, apparently.


The photos came to New Times from National Socialist Movement leader Jeff Schoep. Schoep continues to be hazy about how many of his Hitler-loving kinsmen have set up shop in Sanford in the wake of Trayvon Martin's shooting, but he swears the two people photographed are not the only Nazis in town.

The others "don't want to be photographed," he says; the two pictured — Rushford and an unidentified woman — didn't pose with their guns because they were worried about breaking Florida law.

Rushford, meanwhile, says he's in Sanford to "protect whites... We're here and we're going to continue to be here as long as people want us here."

4. Five neo-Nazis were arrested just this month for holding a huge stash of illegal guns:

Via the Tampa Bay Times:


The sheriff described the Kiowa Drive home as a "cesspool" and said detectives could hardly walk through the place.

While searching the property, deputies said they found reams of American Nazi Family propaganda that outlined the rules, oaths and hierarchy of the group; 12 grams of methamphetamine; a small amount of unidentified opiates; drug paraphernalia such as needles, scales and spoons; hundreds of pages of miscellaneous bank account information and ID cards, including a military ID; and three handguns and a semiautomatic rifle.

Deputies also found a stolen vehicle on the property. They're still searching for another stolen car and motorcycle tied to the group.

5. And they were arrested near the site of a former neo-Nazi compound that was the home of John Ditullo Jr., who was sentenced to life in prison in 2010 for stabbing two people:

Via the Tampa Bay Times:


Ditullio, 24, was convicted of first-degree murder and attempted second-degree murder. In early 2006, he was living with a group of American Nazis near Hudson who hated Patricia Wells, their next-door neighbor, for having an African-American friend and a gay son.

One night, authorities said, Ditullio put on a gas mask and broke into Wells' house, attacking her with a knife. She escaped with injuries to her face and hands, but her son's friend, 17-year-old Kristofer King, died from stab wounds to his skull.

Ditullio maintained his innocence and said another member of the neo-Nazi group, Shawn Plott, was the real culprit.

Testifying Thursday while dressed in all black, Ditullio told the jury he didn't care whether he got life or death.

"I'm not going to beg you people for my life or my death, man. You do what you do. Okay. I don't care. Life in Florida is death in Florida," he said. "But the people that just sat up here and testified that they love me and they want to be part of my life, that's who I ask you to render your verdict on. Not me."

Bonus: Here's a video of some University of Florida students getting in a campus neo-Nazi's face and making him feel like a huge piece of garbage: