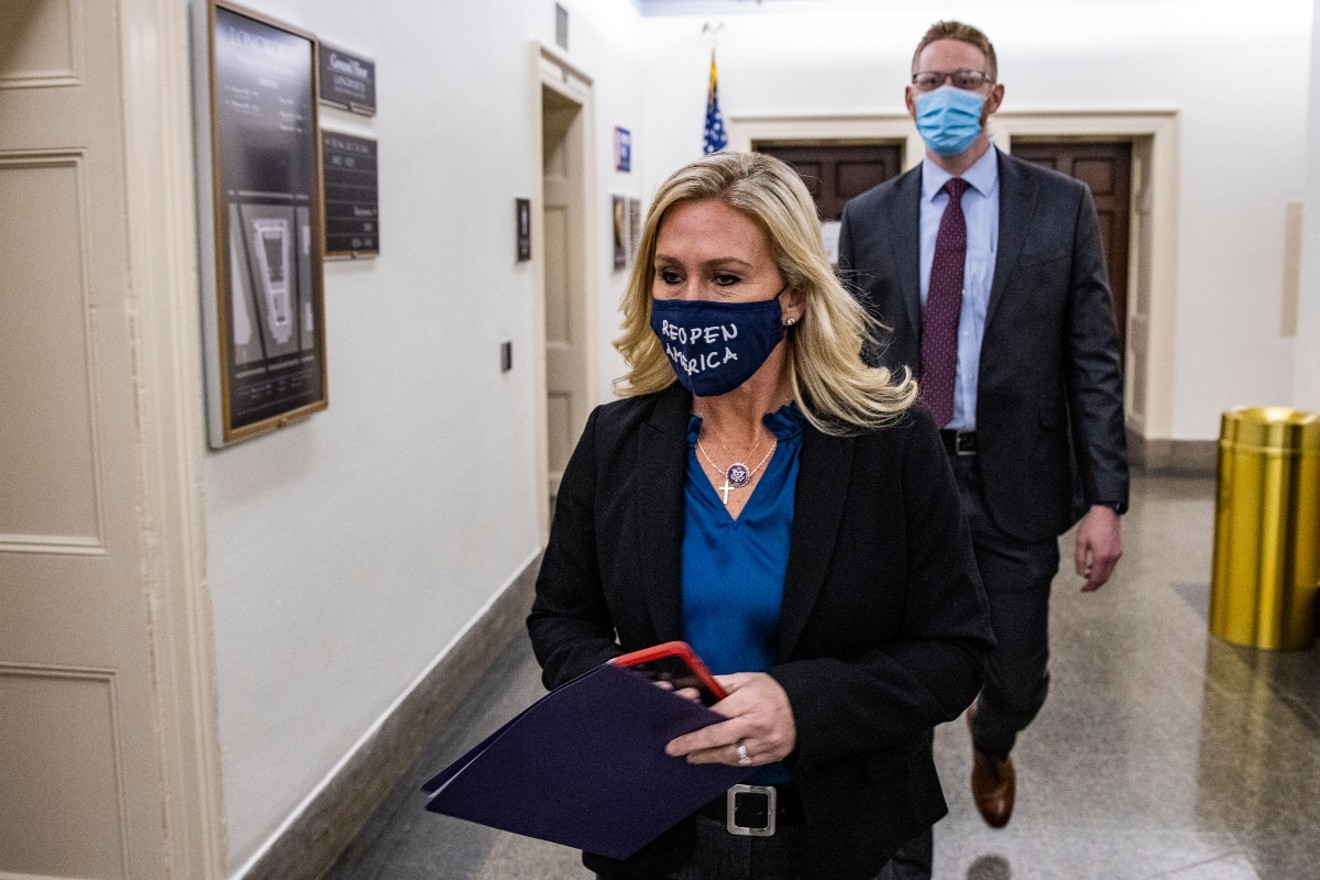 Marjorie Taylor Greene, freshman Georgia congresswoman Photo by Tasos Katopodis/Getty
In the past few weeks, U.S. Rep. Marjorie Taylor Greene of Georgia has made herself the poster child for so many conspiracy theories that she may actually lose her House committee appointments.

On January 19, the nonprofit newsroom Media Matters reported that Greene liked and agreed with a Facebook comment that claimed the 2018 Parkland school shooting that left 17 people dead was a "false flag" event that had been planned and orchestrated so liberals could push for stricter gun laws.

Greene is also a vocal booster of the cultlike conspiracy theory of QAnon, which purports (among other things) that high-ranking officials in the U.S. government are part of an international pedophile ring and that former President Donald Trump was working secretly to arrest them.

The freshman congresswoman also apparently believes the 2018 wildfires in California were ignited by a space laser owned in part by a prominent Jewish family.

It's hard to beat the QAnon Queen at her own game of spouting wacked-out falsehoods, but damned if Floridians haven't tried their best. Here's a list of some of the South Florida conspiracies New Times has covered over the years that have rotted our brains. Follow along and suffer alongside us. 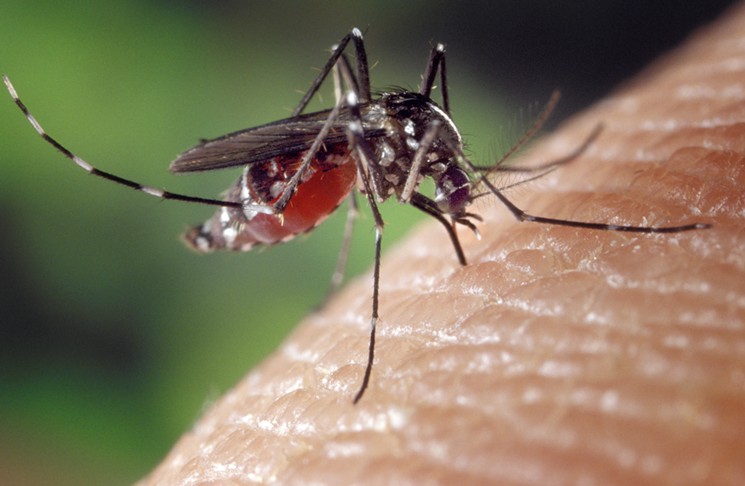 Smack that!
Photo by CDC Global/Flickr
Miami Beach residents thought the Zika virus was fake. What's that old saying? "Those who don't know history are doomed to repeat it"?

It turns out the COVID-19 pandemic wasn't the first time Miamians have refused to believe in science, even when it comes to their own health.

In 2016, the Zika virus was making its way through Miami's neighborhoods via the city's ever-present mosquitoes. The virus, which was known to cause fevers, rashes, and muscle pain in most patients, was far more dangerous for the pregnant women it affected. When mothers contracted Zika, it could cause their babies to be born with severe birth defects such as microcephaly, which can cause babies to have abnormally small heads, according to the World Health Organization.

Despite mounting cases around Miami and obvious medical evidence of the existence of Zika, some conspiracy theorists believed the whole thing was a hoax and not a real threat, scoffing at the pregnant women who wanted to protect themselves from the very real virus. The lack of belief in Zika was compounded by bungled outreach by elected officials in Miami Beach and other touristy areas who tried to downplay the severity of the outbreak.

Leonard Pozner (left), father of Noah Pozner (right), who died in the Sandy Hook school shooting in 2012.
Screenshot/Leonard Pozner via YouTube
A Sandy Hook father was called a "crisis actor" and cyberstalked in South Florida. As if losing a child isn't punishment enough, conspiracy theorists love to dogpile on the parents of school-shooting victims by calling them "crisis actors," implying their suffering was staged and there wasn't a child-size hole in their life.

Such was the case of Leonard Pozner, whose six-year-old son, Noah, was killed in the shooting at Sandy Hook Elementary School in Connecticut in 2012. In the years since the shooting, Pozner has been the subject of death threats, harassment, and conspiracy theories accusing him of lying about his son's death, some of them spread by InfoWars website owner Alex Jones.

In 2018, while Pozner was living in South Florida, having moved seven times to avoid harassment, he alleged in a lawsuit that a Delray Beach cop had illegally accessed his personal information via a driver's license database for no official purpose.

Pozner and his ex-wife, Veronique de la Rosa, say they were also subject to harassment by then-Florida Atlantic University professor James Tracy, who believed the government faked the Sandy Hook shooting in order to repeal the Second Amendment. Tracy allegedly sent Pozner's family a certified letter demanding proof that Noah ever existed and evidence that Pozner and de la Rosa were his actual parents.

Former Broward County Supervisor of Elections Brenda Snipes, who was accused of elections fraud by conspiracy theorists.
Photo by Broward County Supervisor of Elections
Right-wing protesters thought the 2018 election was stolen, too. What is it about Florida that attracts so many claims of election fraud? Is it the outsize population of people from countries with different election systems? Or is it the ghost of Al Gore's unsuccessful presidential bid?

Whatever the source of our collective disorder, 2020 wasn't the first time Floridians called foul over election procedures. In 2018, a host of Trump supporters and conspiracy theorists descended on the office of the Broward County Supervisor of Elections, claiming fraud and chanting, "Lock her up!" in reference to then-Supervisor of Elections Brenda Snipes.

The crowd, which included members of the alt-right Proud Boys group, appeared in front of Snipes' office carrying signs saying, "SUPERVISOR OF CORRUPTION" and "BRENDA FOUND MY VOTE UNDER HER BED" and claiming Democrats were trying to steal the election with "sneaky" recounts.

The crowd had been egged on by President Trump and then-Florida Gov. Rick Scott, who was engaged in a race against Bill Nelson for the latter's U.S. Senate seat. They claimed that shrinking margins of Republican victories as mail-in votes were counted was evidence there was some sort of vote manipulation on the part of Snipes.

Scott demanded an investigation into the Broward Senate and gubernatorial vote tallies, but after 17 months, the Florida Department of Law Enforcement (FDLE) came up empty. (Scott won his race with Nelson.) The FDLE found no evidence of the widespread voter fraud that Scott insisted was real, and the conspiracy theory was debunked — but that didn't stop Republicans from trying the same tactic two years later in 2020.

For crying out loud, do not ingest industrial bleach in an attempt to cure or prevent COVID-19.
Photo by Incase/Flickr
A Florida church hawked bleach as a cure for COVID-19. When Trump mused about injecting bleach into COVID-19 patients as a cure for the virus last year, you might have thought, "No one would believe that could work, right?" But as always, Florida never ceases to disappoint.

Last July, Florida man Mark Grenon, leader of the Genesis II Church of Health and Healing, was charged in federal court along with his sons for selling bleach as a miracle cure for the coronavirus. In fact, Grenon had sent a letter about the product to Trump shortly before the president mentioned bleach at a coronavirus press briefing.

The Grenons marketed their "Miracle Mineral Solution," or "MMS," as a cure-all for COVID-19, Alzheimer's, autism, brain cancer, and pretty much everything else under the sun. But prosecutors say they were just telling people to swallow loads of industrial disinfectant, potentially endangering their customers' lives.

Although the Grenons were hit with a restraining order that barred them from distributing MMS and further endangering the public, a court complaint claimed they continued to distribute the dangerous substance through alternate channels.

Court records allege the Grenons made off with nearly $600,000 by convincing gullible people that gulping literal poison was the best way to protect themselves from a deadly virus.

Miami-Dade Commissioners Javier Souto and Esteban Bovo
Photos via Miami-Dade County
Miami-Dade commissioners said Cuba was weaponizing COVID-19. Because it isn't Miami without a good Cuba-related conspiracy, last April, Miami-Dade County leaders insinuated that the island nation was to blame for the spread of COVID-19 in parts of South Florida, including Hialeah, and therefore wanted to restrict travel to and from the island.

County Commissioner Javier Souto said during a livestreamed commission meeting that Cuba had been known to experiment with diseases and biological warfare at the time of the Cold War and intimated that the new disease ravaging Miami may be the result of similar efforts by the Castro regime.

"They have...weaponized certain diseases and certain things. This might very well be some sort of moment that they are trying to capitalize and use to [inflict] one more wound on us, on the USA," Souto said at the time.

Other county leaders, including then-Commissioner Esteban Bovo and then-Mayor Carlos A. Giménez, also cited concerns that Cuba was not reporting its coronavirus numbers correctly, posing an outsized risk to Miamians, should people travel from the island. While that explanation sounded reasonable, commissioners did not move to restrict travel from other COVID-19 hotspots around the world, undermining their entire argument.
KEEP MIAMI NEW TIMES FREE... Since we started Miami New Times, it has been defined as the free, independent voice of Miami, and we'd like to keep it that way. With local media under siege, it's more important than ever for us to rally support behind funding our local journalism. You can help by participating in our "I Support" program, allowing us to keep offering readers access to our incisive coverage of local news, food and culture with no paywalls.
Make a one-time donation today for as little as $1.