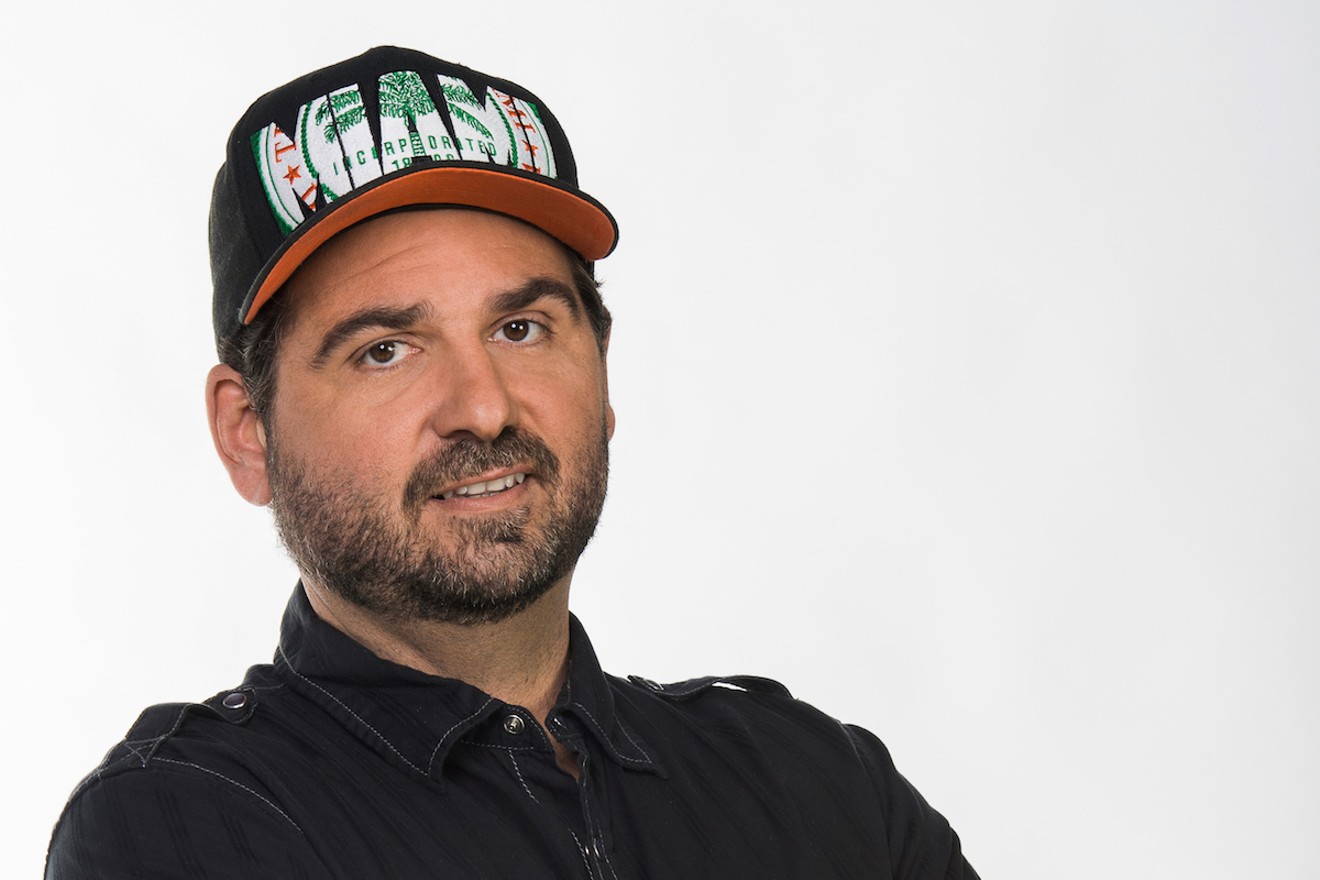 Dan Le Batard Photo by Rodrigo Varela / ESPN Images
Former Miami Marlins president David Samson appeared on Miami ESPN host Dan Le Batard's radio program this morning. The two men were doing damage control after New Times yesterday published a video of Samson appearing onstage at Le Batard's 50th birthday party over the weekend. It showed Samson bragging about conning Miami taxpayers into subsidizing the Marlins before he sold the terrible baseball team for $1.2 billion in 2017. On the radio this morning, Samson did not apologize for telling Miamians to "keep booing" him before shouting, "One-point-two billion! Fuck you!" and raising his middle finger.

Samson claimed it was a joke. "We were all in the moment, and I was just adjusting to the moment," Samson said on-air today. "I am not apologizing for doing my job." He also said he would not let anyone question "whether I have affinity, love, and respect for Miami."

Problem is he's made similarly callous statements about his team's finances for years.

But speaking with New Times this afternoon, Le Batard himself expressed remorse over the Wynwood Yard incident, which he called a piece of "performance art" that did not go over well with the public. "I’m embarrassed that it happened at our party, given how much I care about Miami and journalism," he said. "At the same time, I can also see the funny in it. I don’t expect everyone to, but that's sort of the nature of performance art.

"But I get that it looks like a couple of journalists onstage fat-catting with a team president. I get why that would bother people."

Le Batard is keenly aware this is a bad time for his name to show up in negative headlines. He launched a podcast with ESPN just yesterday and says he's still figuring out how to run it. Samson has been a guest on Le Batard's radio and TV programs for years. He's talked about baseball, the challenge of being wealthy, and even movies.

But critics yesterday questioned why Le Batard, who is ostensibly a journalist, would give such a friendly platform to someone credibly accused of lying to the public so his rich sports team could receive millions of dollars in taxpayer subsidies.

Le Batard says he thinks this is fair criticism, but "my first priority is supposed to be to the audience, to content, to creating a radio show. And [Samson] is good radio."


Here is @DavidPSamson’s entrance at Mas Miami. One of the funniest things I’ve seen in quite some time. pic.twitter.com/19x86I2zYA

But Samson was caught lying about the Marlins' finances in 2008 as the team looked for support for what would eventually become Marlins Park. He repeatedly claimed the Marlins were losing money and, therefore, needed the public's help. But in reality, the Fish were making hundreds of millions of dollars in profit.

Taxpayers will likely wind up shelling out more than $2 billion to pay for a stadium that draws depressingly small crowds. (Earlier this year, New Times deduced that Marlins Park in 2018 drew roughly the same number of fans as a AAA minor-league team.) The deal is one of the worst taxpayer boondoggles in recent U.S. history. The Securities and Exchange Commission investigated the stadium pact. Voters got so angry they held a recall election and fired then-Mayor Carlos Alvarez.

That $2 billion could have been used to fund public transportation, schools, sea-level-rise-prevention projects, or services for the homeless. Instead, it went into the pockets of Samson and then-Marlins owner Jeffrey Loria, Samson's former stepfather. So last Friday night, Samson got onstage in a ludicrous-looking shiny sport coat and told the city to go fuck itself.

Samson and Le Batard continue to maintain the executive was "playing a character" during his appearance over the weekend. (On the radio this morning, Samson confirmed the joke was not "scripted" but claimed people were taking his "gag" out of context.) But this was not the first time Samson has bragged about swindling taxpayers: He once called Miami voters stupid. When he was a contestant on the reality-TV series Survivor, his bio included a line about how he was famous for brokering the stadium deal "during a recession."

Multiple Miami journalists were in the audience at Le Batard's party. Critics have zoomed in on one in particular: longtime Miami Herald sports columnist Greg Cote, a recurring guest on Le Batard's programs; he was filmed cackling in the background while Samson bragged about how rich taxpayers had made him. (The Herald's own recap of the controversy published today bizarrely did not mention Cote's name.) Critics online questioned whether Cote and other sports reporters in town are too close to the teams they're supposed to be covering. Cote, for example, wrote columns in favor of Samson's stadium plan.


The @MiamiHerald endorsed the Beckham boondoggle this year in an op ed that brought up the Marlins Park scam three times but NEVER mentioned their own endorsement of it. Also there's Cote's virtually identical column defending sports welfare almost exactly 10 years apart. pic.twitter.com/KWdajcaVmu

Le Batard says he understands why the optics of the party seem, ahem, not great for the journalists who were involved. He has been a loud critic of the new Marlins ownership. In December 2017, he grilled MLB Commissioner Rob Manfred after the new ownership group, led by Derek Jeter, sold off multiple All-Star players simply to cut payroll. Le Batard later said ESPN pressured him to stop criticizing Manfred.

"It’s fair criticism to say I really went after Rob Manfred the commissioner for not protecting Miami, but at the same time, I have Samson on my show," Le Batard admits. "At worst, that’s hypocritical. At best, it's maybe inconsistent."

He added, "You can make your own decisions whether it’s right or not, whether it compromises journalistic principles for what people might think are friendship, bias, whatever. If the whole thing is a bad look, you guys from on high can say that."
KEEP MIAMI NEW TIMES FREE... Since we started Miami New Times, it has been defined as the free, independent voice of Miami, and we'd like to keep it that way. With local media under siege, it's more important than ever for us to rally support behind funding our local journalism. You can help by participating in our "I Support" program, allowing us to keep offering readers access to our incisive coverage of local news, food and culture with no paywalls.
Make a one-time donation today for as little as $1.