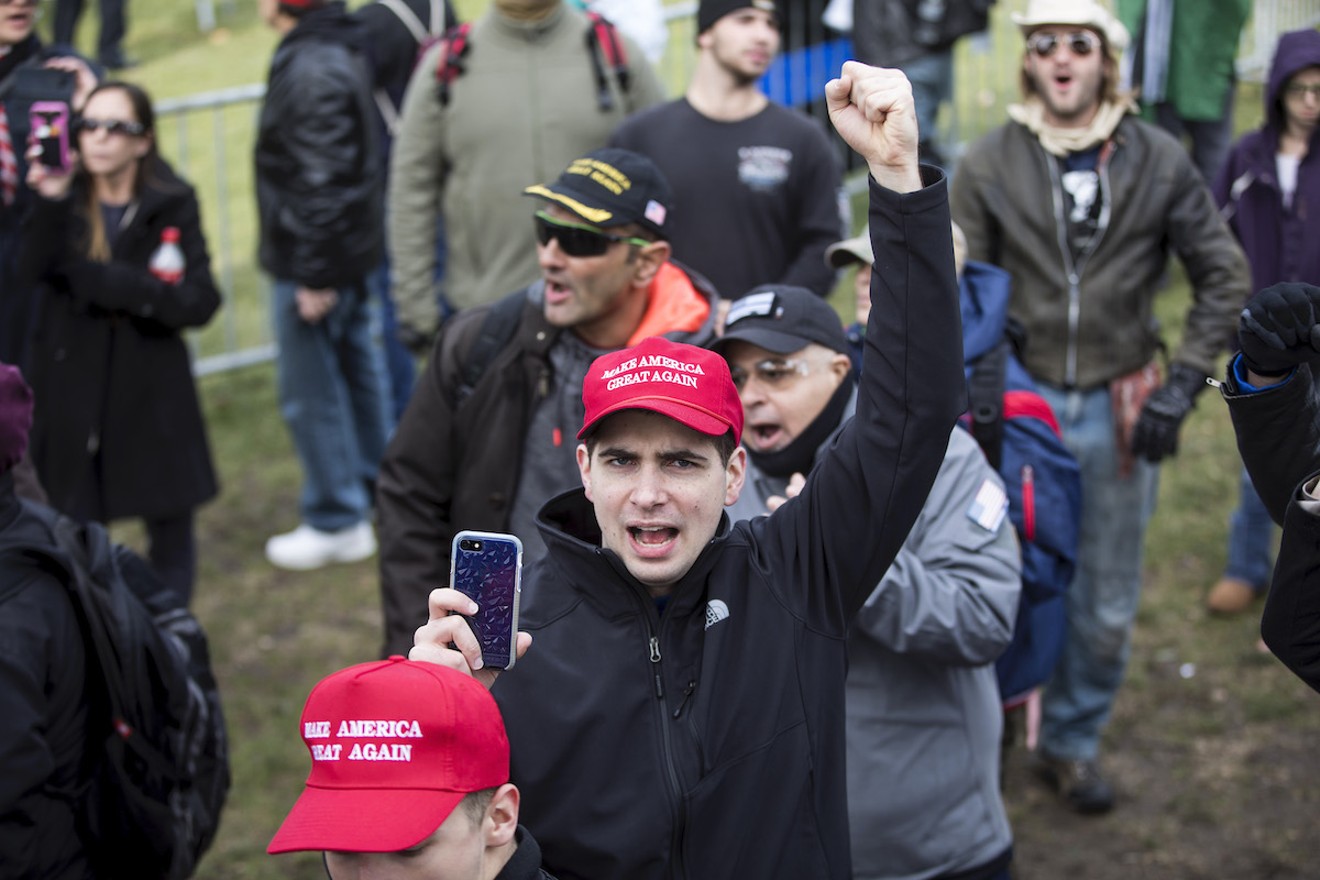 An alt-right rally in Boston November 18, 2017. Photo by Scott Eisen / Getty
A veritable who's who of right-wing con artists, alt-right media hounds, and outright racists apparently plan to hold some sort of Art Basel for Grifters conference in Miami this month. An avalanche of some of the worst pundits online — including at least one fascist — say they'll hold a "Demand Free Speech" rally Saturday, September 28, on an undisclosed yacht somewhere in the Magic City.

The event's top billing? Serial con artist Jacob Wohl, who is charged in California with a felony for unlawfully selling investments in a company called Montgomery Assets, will apparently debate Nick Fuentes, a self-described "American nationalist" who has appeared on white-nationalist programs and at one point was recorded going on an anti-Semitic rant about a fellow conservative blogger by calling him a "race traitor" and saying he "worked for Jews." It's unclear what Wohl and Fuentes might actually debate, but the event seems designed more to generate protests and controversy than to conduct intellectual discussions. Screenshot via @DemandFreeSpeech / Instagram
The grifters have yet to announce a location for the event, likely to avoid protests before the so-called debate occurs. So far, the event pages simply states it will happen "on a four-decker yacht in the legendary Miami Harbor" and will include "heated debates, a stimulating panel, based and red pilled entertainment, food, drinks and much, much more."

But tickets are being sold on the website 1776.shop, which is run by Enrique Tarrio, a Miami native who leads the neofascist Proud Boys group. "Early-bird" VIP tickets cost $150 for whatever reason. Among the other guests, the group says Zoe Sozo, an ambassador for the campus conservative group Turning Point USA, will also attend. This would be far from the first time TPUSA operatives have brushed elbows with far-right nationalists such as Fuentes: In 2018, New Times caught students in the Florida International University TPUSA chapter making rape jokes, sharing racist Pepe the Frog memes about Syrian refugees, and referencing "Jew hating" and neo-Nazi Richard Spencer in leaked WhatsApp chats.

The event's webpage also appears to include artwork seemingly stolen from Elizabeth Kolbert's 2015 New Yorker article "Miami Is Flooding." Spokespeople for the New Yorker did not immediately respond to a message from New Times today.
KEEP MIAMI NEW TIMES FREE... Since we started Miami New Times, it has been defined as the free, independent voice of Miami, and we'd like to keep it that way. With local media under siege, it's more important than ever for us to rally support behind funding our local journalism. You can help by participating in our "I Support" program, allowing us to keep offering readers access to our incisive coverage of local news, food and culture with no paywalls.
Make a one-time donation today for as little as $1.