Okeechobee Music Festival Looking to Return in 2020 Under New Ownership 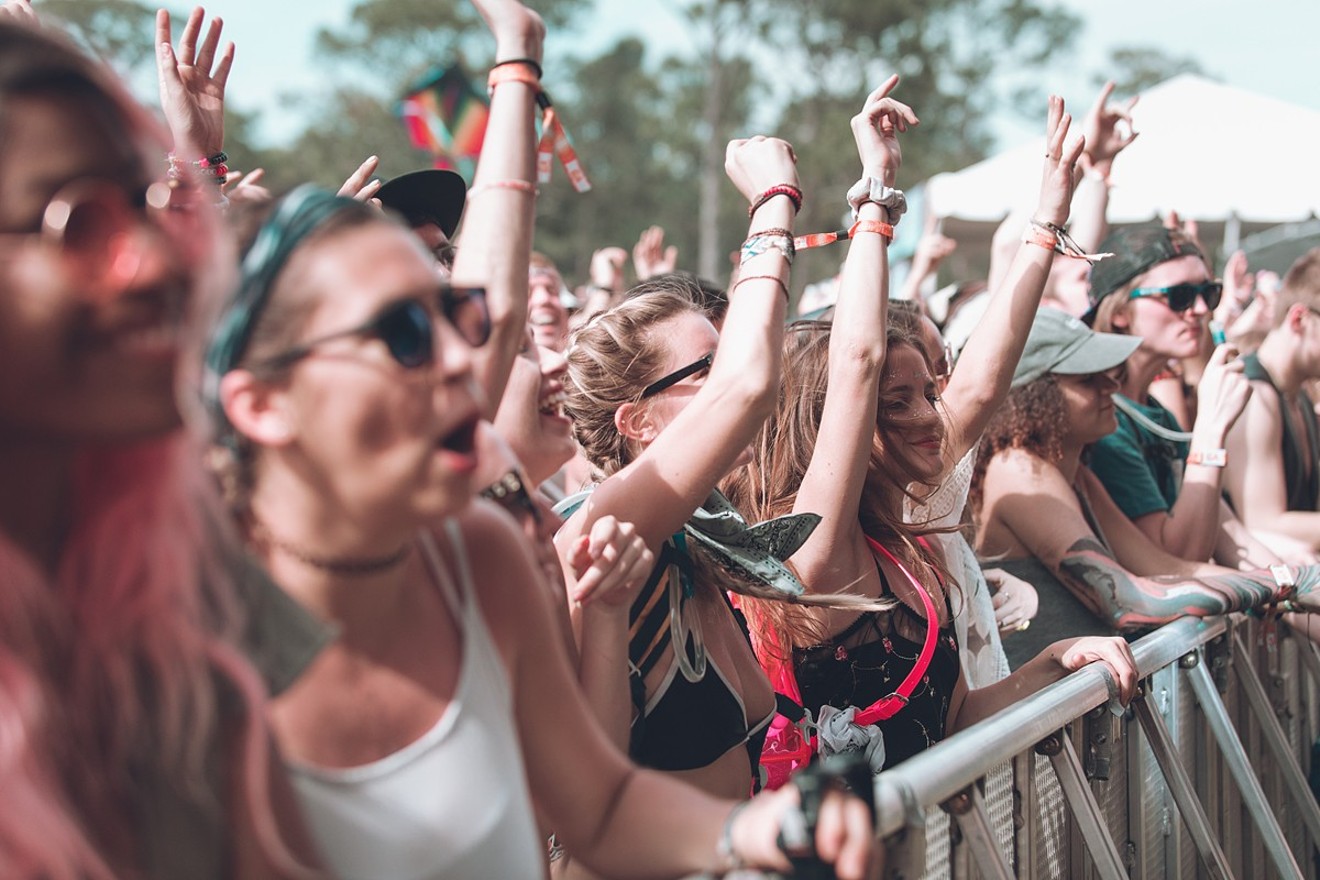 Get your festival gear ready — it's looking like Okeechobee Music and Arts Festival is coming back. Photo by Herb Gonzalez
Following a quiet 2019, Okeechobee Music & Arts Festival (OMF) is poised to make a comeback in 2020. Rumors have been swirling for months about the festival's return, but thanks to public records and sources, it's become clear the portal will be opening again next year.

Online, fans and EDM sources have speculated that Insomniac, the concert promoter behind Las Vegas' Electric Daisy Carnival, Electric Forest in Michigan, and Hard Summer in Southern California, has taken over the Okeechobee brand. If true, this would bring Insomniac even closer to the longtime territory of its EDM festival competitor, Ultra Music Festival. Insomniac's only Florida event has been EDC Orlando, which takes place in November. Reached by New Times, Insomniac representatives wouldn't confirm the rumor.

While it's unclear if Insomniac is behind OMF's return, there's strong evidence someone is trying to bring it back. At a recent Okeechobee County Commission meeting, there was a discussion of the festival wanting to return in March during the same time as the county's Speckled Perch Festival and Okeechobee Cowtown Rodeo. Both have been held in the area for more than 50 years. It seems Soundslinger, the music festival's former production company, always took the local events into consideration when planning the festival.

On May 23, Okeechobee County Commissioner David Hazellief brought the issue of the conflicting dates to the other board members.

"No one that started with the music festival's production side is involved with it today," Hazellief said at the meeting, confirming that Soundslinger is no longer involved with the festival. "I'm not sure that they know that from the inception, we were told it would not conflict with Speckled Perch and the rodeo."

Hazellief said he supported the music festival, but he and the board unanimously agreed that for negotiations to move forward, OMF would have to pick another date. Hazellief didn't return New Times' call or email requesting comment.

The Okeechobee County Cattlemen's Association was ready to protest at last week's commission meeting after news surfaced that OMF's organizers planned to ask the county commission to reconsider its decision to prevent the festival taking place during the Cowtown Rodeo. However, a day before the meeting, the Cattlemen's Association called off the protest after music festival organizers decided to reschedule.

Jim Colgan, president of the Cattlemen's Association, supports the music festival. But much like OMF, he says, the rodeo takes a lot of careful planning. "We have to work with other rodeos close by to get the contestants down here. It's similar to a music fest: You don't want to come all the way down to Florida for one rodeo this weekend and then turn around and come back next weekend. To make it easy on the contestants, we make it so they can hit three rodeos in one weekend. If it was up to us, we would change our dates, but we can't."

The festival announced in November 2018 that it intended to take “a fallow year” and would not host the gathering in 2019. Despite organizers’ commitment to “looking to March 2020,” there were few signs the event would resume.

Okeechobee Music Festival, named for its Lake Okeechobee-adjacent location, was first held at 800-acre Sunshine Grove in March 2016. Sporting headliners such as Kendrick Lamar, Skrillex, Robert Plant, and the late Mac Miller, the festival was initially conceived as a smaller, Florida-based alternative to Tennessee’s Bonnaroo. Although OMF never approached Bonnaroo’s hegemony on the North American festival circuit, it wasn’t for lack of pedigree: The festival was cofounded by Steve Sybesma and Paul Peck, the latter of whom helped to produce Bonnaroo’s famous SuperJam shows. Sybesma and Peck left the festival after its first year due to apparent “philosophical differences” with owners Soundslinger. The pair is currently assembling Miami Beach Pop, a three-day music festival scheduled to take place on November 8 through 10 in South Beach.

Although the festival brought a diverse assortment of musical acts for subsequent years — including a rare live performance from Solange as well as appearances by indie rock favorites Arcade Fire, the Flaming Lips, and Mac DeMarco — OMF’s 2017 and 2018 lineups moved in a more EDM-oriented direction. First-year headliner Bassnectar became something of a resident DJ, having performed at all three of the festival’s editions thus far. In 2018, the long-haired artist was joined on the lineup by bass music favorites Illenium and Zeds Dead, helping to characterize Okeechobee as a preferred destination for festival attendees who wouldn’t look out of place on the Colorado Big Game Trophy Wook Hunters group on Facebook.

In addition to the festival’s main “Be,” “Here,” and “Now” stages, OMF also hosted Jungle 51, a side area curated by the Sheik 'N’ Beik collective geared more toward house and techno listeners. The luminous outdoor stage presented selector extraordinaire Honey Dijon in 2018 as well as Get Lost mastermind Damian Lazarus and techno innovator Derrick May in prior years. Despite the festival’s year off, Jungle 51 threw an Orlando event with dance music legends Dubfire and Todd Terry in March.
KEEP MIAMI NEW TIMES FREE... Since we started Miami New Times, it has been defined as the free, independent voice of Miami, and we'd like to keep it that way. With local media under siege, it's more important than ever for us to rally support behind funding our local journalism. You can help by participating in our "I Support" program, allowing us to keep offering readers access to our incisive coverage of local news, food and culture with no paywalls.
Make a one-time donation today for as little as $1.