You won't find SoBe-style "mango/jalapeño/flourless chocolate piña colada" sushi rolls here. And the restaurant's setting in a low-rent mall could not be less trendy. But when a Japanese restaurant is packed nightly with Asian diners and regulars -- and one of the regulars happens to be the chef at one of Manhattan's most critically acclaimed spots for kaiseki (elaborate ceremonial tasting dinners, the ultimate in Japanese culinary arts) -- you know you're on to something special. Instead of going in the direction of unorthodox cuisine, Matsuri offers numerous sophisticated traditional Japanese delicacies rarely found in the U.S. -- except on Matsuri's specials board in the front of the room: ankimo monkfish liver, often likened to foie gras; nama uni, sparkling-fresh sea urchin that tastes like the most delicate of custards; shisamo, succulent salt-broiled freshwater smelts stuffed with their own caviar; negitoro wasabi topped with a tiny quail egg, sort of a tuna take on traditional steak tartare. What's also always offered is toro, something often seen on other Miami menus but seldom actually available -- and the price here for buttery belly tuna sashimi or sushi is about one-third what you'd pay at more high-profile spots.

BEST CHEF TO RISE TO THE TOP

When South Beach superstar chef Michael Schwartz left the eatery he co-founded, Nemo, last year, local media meticulously tracked his every post-Nemo burp (literally -- a burp's length being about as long as Schwartz's much-ballyhooed tenure at Bal Harbour's Atlantic House lasted). No such attention has been accorded to new Nemo head honcho Mike Sabin. Why? Maybe because Sabin isn't really new, just newly on top; he was actually the first cook hired when Nemo opened in 1995 -- which makes his succession seem same-old-same-old. In between his original Nemo time and now, though, Sabin garnered mighty impressive cooking credits, at Pacific Time and five restaurants in the Mark Militello empire locally, as well as a stint at Virginia's Inn at Little Washington, considered by many pro foodies to be the nation's top kitchen. Nevertheless, since returning to Nemo Sabin has demonstrated remarkable restraint, displaying eagerness rather than ego-tripping. He added some of his own innovative, boldly spiced Mediterranean-influenced fusion dishes to the menu, but retained the house-cured salmon/sprout rolls, the grilled Indian-spiced pork chop, the outstanding raw bar/shellfish platters, and all the other beloved favorites Nemo's regular customers count on. This respect for long-time patrons, as well as Sabin's meticulous attention to detail, almost superhuman energy, and just plain talent, make him worthy of much more notice.

The SSC has carried out a number of successful lunchtime sandwich deployments since completing its Design District buildup in late 2002. The Bay of Pig, one of the most effective items in its arsenal, contains the following judiciously selected ordnance: roasted and seared pork loin with grilled onion and mojo marinade, all packed into a baguette. But given the disastrous and deadly April 1961 invasion of Cuba for which it is named, do customers find it tasteless? Co-owner Cesar Canton, whose family carries bona fide anti-Fidel credentials, serves up an anecdote on wry: "A woman recently called up and ordered one for delivery. She goes: 'And could you send it with some air cover this time?'"

To borrow a line from the old ad campaign for Arnold's rye bread, you don't have to be Jewish to eat kosher chocolate. Indeed whether you follow those dietary rules or not, the ultimate issue is taste, for which Krön is an ecumenical experience of the heavenly culinary variety. Its tantalizing array of candies, truffles, and dipped fruits are all made by hand with top-notch ingredients (and prices to match). Coffee and baked goods like brownies and cookies are also for sale, though the tables set out in the middle of the mall are decidedly unatmospheric. Recent ink on the store has hinted at expansion plans. Let's hope any new outlets include a proper café.

"You don't need teeth to eat our meat," boasts the barbecue joint's menu. Apparently you don't need legs to get take-out service, either. Just call ahead for some hickory-smoked pulled chicken sandwiches, collard greens, homemade cornbread, and succulent pork ribs, give another ring when you've pulled up to the front door, and the friendly folks inside will hurry outside with your order. It's like a bank drive-thru, but with no need to show ID. And given the lack of street-side parking and the somewhat unsavory neighborhood, the service is not just a good but a necessary idea. The trick, of course, is not to swill down the beef brisket before you even pull back into traffic.

With about a dozen specialty beers on tap (plus seasonal selections) and another half-dozen or so microbrews in bottle, Titanic may not have the biggest selection, but there's no arguing that this brewery and restaurant has the most flavorful, carefully crafted beer in town. Brewmaster Jamie Ray whips up at least half of the daily draught offerings, including the evocatively named Boiler Room Nut Brown Ale and Triple Screw light ale, and he keeps receiving national awards for them at competitions where the judges, for the record, never spit. Then there are all the beer-related events -- live blues-and-brews, Mug Club specials, name-that-brewski contests, University of Miami sports nights, Brewmaster dinners, free T-shirt happy hours. The microbrew boyz here even send out an e-mail newsletter every week.

BEST RESTAURANT FOR THE HEARING IMPAIRED

It could be that the noise level is deliberate, a reflection of the urban name, or accidental, a result of the former Astor Place's mod-Italian renovation. But while there may be quibbling about the motive, there's no question over the decibel level -- it's about as high as the two-story ceiling allows. That said -- or shouted -- Metro possesses a great buzz. Like that created by a horde of honeybees feeding on the pollen of flowers that have been grown on a nuclear-waste dumping ground. But a buzz, nevertheless. And on South Beach, louder is always better.

For $1.27, proprietors Fernando and Belkis Lopez offer up a deliciously spicy black bean soup that would make any Cuban mom envious. You can order it to go or savor the soup inside the Lopezes' humble restaurant, a popular lunchtime spot for the Gables working crowd, many of whom pop in to take advantage of specials such as turkey peccadillo and veggie lasagna. You can also enjoy one of the dozen or so pocket pita sandwiches and wraps along with your black bean soup for a well-rounded meal. Also featured on the menu are luscious smoothies and vegetable-juice combos purported to cure every ill from arthritis and acne to indigestion and impotence. Open for breakfast and lunch, from 8:30 a.m. to 4:30 p.m. Monday through Friday. 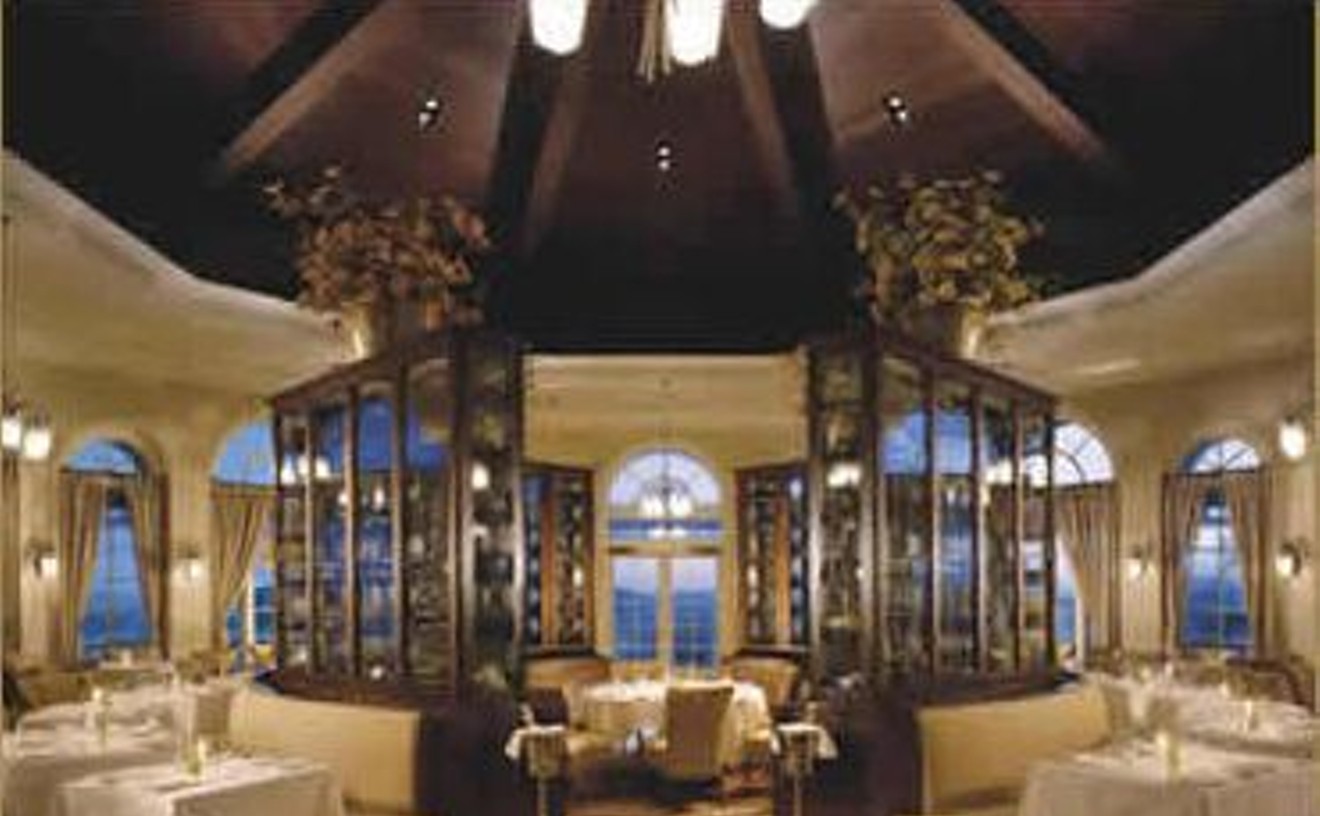 It's not surprising that Norman's remains the Gables's best restaurant. Quite frankly Norman's could give the best restaurants in New York, San Francisco, or Paris a run for their money. What's surprising is that there are still Miamians who haven't been to Norman Van Aken's mega-award-winning, elegant yet friendly place. Sure, it's expensive. But so are many other Miami restaurants that are just upscale meals. Norman's is a once-in-a-lifetime experience -- or would be if it weren't for the fact that no one who's been once can resist going back again and again, to revisit favorite classic dishes such as yuca-stuffed crispy shrimp with sour orange mojo, a zingy 21st-century take on traditional Cuban roast pork, or The Ultimate conch chowder (saffron/citrus-tinged, creamy-smooth, and topped with a rich foam "cloud"), as well as to taste-test the myriad of astonishing new surprises Van Aken always, like a world-class magician, has up his sleeve. Recent new inventions include Brazilian-influenced black-eyed pea acarajé fritters stuffed with blue crab; a "New World" duck duo (mango barbecued duck in a green chili crêpe, plus slices of wood oven-roasted rare duck breast with a cumin/scallion sour crema); and a remarkably innovative sushi trio (think crisp West Coast kumamoto oyster in piquant unagi dressing with Asian shoots, or tuna tartare with quail egg) whose only flaw is that there are only three rather than thirty per serving. Hungry yet? Don't mind us. Go eat. See ya next year, Norman, same time, same BOM category. 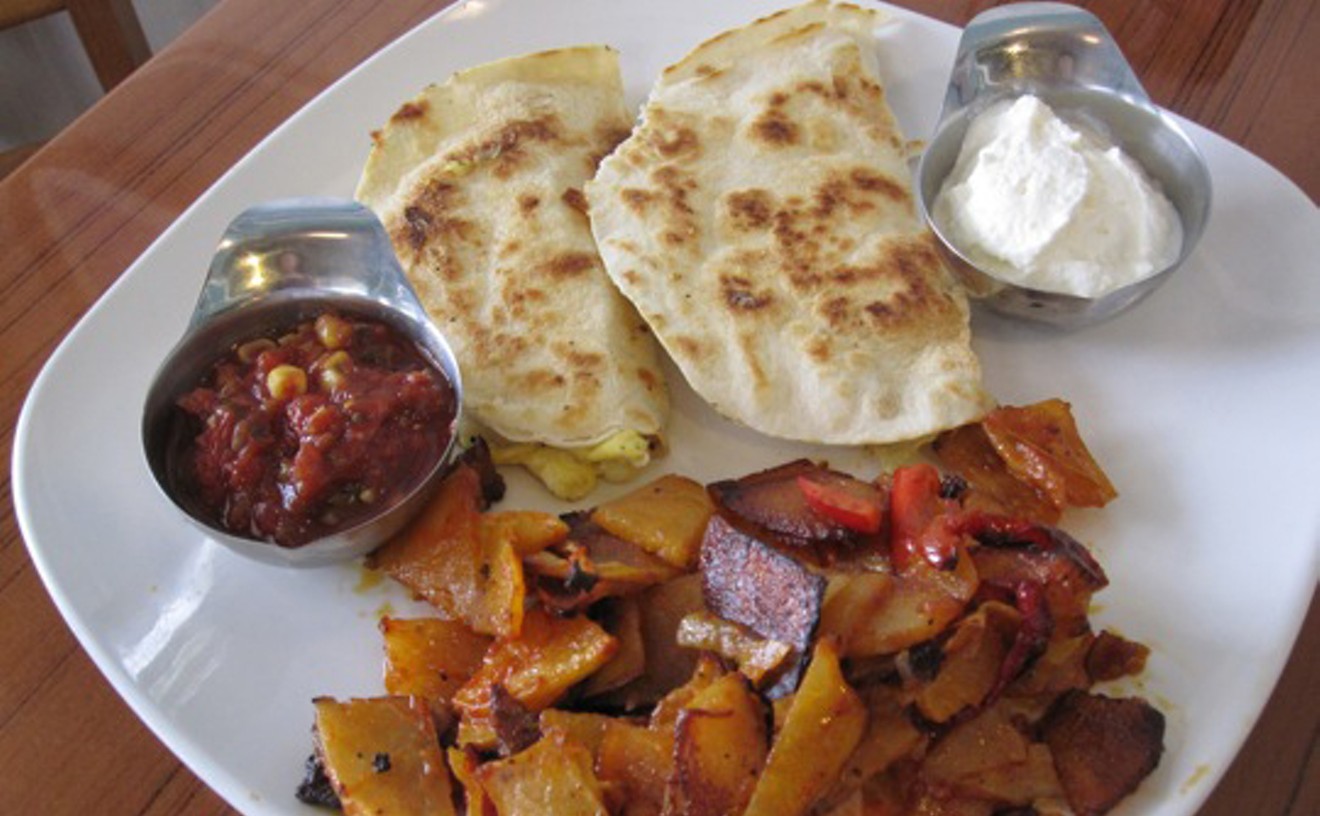 A mensch, as defined in Leo Rosten's The Joys of Yiddish, is "someone of consequence," of solid character. This could also serve as the definition of a bagel -- a real bagel, that is, chewy enough to provide challenge, not those puffed-up pillows sold by supermarkets and most bagel chains, many of which don't even bother boiling their sissy specimens before baking them. For a bagel with guts you go to the source -- H&H Bagels of New York, by many accounts the world's absolute best. (Visit www.hhbagels.com to learn more.) Though the mid-Miami Beach branch of the originally NYC-based Tasti D-Lite chain makes most of its tasty baked goods in-house, the owners are wise enough to not mess with perfection. Their bagels are flown in from H&H. These are bagels that provide resistance to the teeth and honest yeasty flavor that comes from its own dough, not from blueberries, chocolate chips, or other frou-frou additions. They are mensch bagels, and in providing them, Tasti D-Lite has done Miami's human mensches a mitzvah.